CULTURE
WTF Is Bhang and How Do You Make a Banging Cup of It?
AD
Bhang is one of the world’s oldest cannabis-infused edible recipes. What is it, exactly, and how can you make some of this delicious, ancient drink at home?
Published on November 23, 2019

One of the coolest ways to get lit is by drinking weed. When prepared correctly, cannabis-infused drinks taste amazing, and many people find that weed drinks kick in faster and more consistently than eating a full, rich dish infused with THC.

Bhang, which hails from India, is the oldest documented weed-infused edible known to historians. Its first mentions pop up in holy Hindu texts a thousand years ago, but the recipe has probably been around for much, much longer.

The word bhang is also synonymous with cannabis in India, and there are several twists on this time-honored recipe. For instance, the recipe we’ll cover here is the basic, brass-tacks version of bhang, an infused creamy drink with the consistency of hot chocolate. You can also find other variants of bhang, such as bhang lassi, which is basically a thicker, even creamier version with a yogurt and butter mix as the primary base instead of milk. There’s also bhang thandai, which is spicier and nuttier than the basic version.

So what, exactly, is bhang? It’s a drink made from marijuana mash, milk, spices, and a sweetener such as honey or sugar. And yes, if prepared right, you can get lit like a Holi festival off just one cup. You’ll find one of the simplest recipes for bhang below.

Note: Unlike the amazing writer for our “Baked to Perfection” series, Carly Fisher, I’m not attentive enough for specific measurements when I prepare any recipe. I’m one of those wing-it type kitchen chemists, so select your measurements (and ingredients) based on your own preferences, dietary restrictions, tastes, resource limitations… and local laws.

Step One: Gather Your Ingredients and Materials 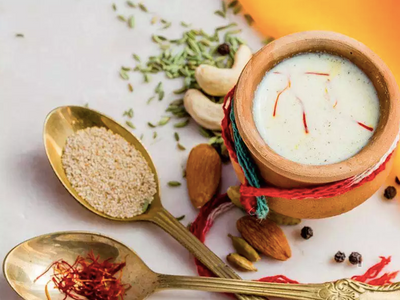 A Word on Decarboxylation!

You may have noticed that the traditional recipe listed here skips an important step — if you’re trying to get elevated, that is.

If you want your bhang to give you a buzz, you’ll need to first activate the THC in your cannabis by decarboxylating it. Water makes up the bulk of bhang, and since water can never get hotter than 212°F (100°C), decarbing will require about four hours of boiling.

If you don't want to sit through yet another viewing of "The Godfather, Part II" while waiting on that boil, follow our handy quick decarboxylation guide here at MERRY JANE instead. Our oven-decarb method, which only takes about 20 minutes, will be the very first step for making your bhang if you go this route. Once the weed is heat-activated, follow the rest of the recipe, and you should be good to go!

Just keep in mind that edibles take much longer to kick in than smoking weed, and they usually hit much harder than smoking, too. So, as always: Start low, go slow, and sip responsibly.

420
HOW TO
HISTORY
WTF
MORE...
Randy Robinson
FOLLOW
Based in Denver, Randy studied cannabinoid science while getting a degree in molecular biology at the University of Colorado. When not writing about cannabis, science, politics, or LGBT issues, they can be found exploring nature somewhere in the Rocky Mountains. Catch Randy on Twitter and Instagram @randieseljay
Share this article with your friends!
AD
By using our site you agree to our use of cookies to deliver a better experience.
Accept
Decline
MORE FROM MERRY JANE