CULTURE
Women Paved the Way for Mexico’s Cannabis Legalization Movement, and Here’s How They Did It
AD
From bringing joints and cannabis plants to the floor of Congress to presenting the first legalization laws, here’s how women have fought to dismantle marijuana prohibition in Mexico.
Published on April 13, 2021

In the midst of this panorama, Mexico seemed to hover on the brink of its legalization age (the march took place nearly a month before senators asked for yet another delay to the cannabis regulation process.) A contingent of some 60 cannabis industry professionals and supporters — including Mexico City legislator Alessandra Rojo de la Vega — were determined to include drug reform justice in this complex-era of politics. They marched with signs bearing the slogan “revolución con flores” (meaning, “revolution with flowers”) as they inhaled tokes of the plant.

“At the end of the day, women have a closer relationship to the plant,” says Heidy Alexis Sancen, co-founder of Mexican glass supplier Don Pipa Dom, who organized the march along with Mexican cannabis industry advocates Lorena Beltrán and Cannaboss. “The plant is female, the plant is a mother.”

“We decided that this March 8th, it was important for Mexico to learn about what is happening in the cannabis industry and that it's being led by women,” continues Sancen, who also emphasized the importance that solidarity among women cannabis professionals has played in her career.

Women marihuaneras have traditionally been viewed with disrespect in Mexico, seen as lazy layabouts, or — worse — criminals, thanks to propaganda like the fearmongering Catholic television show, Rosa de Guadalupe. But as legalization in Mexico inches closer, the public face of the woman cannabis consumer and advocate is changing across the country. The social stigma is fading, which is giving more women an opportunity to be open about their use.

Women-focused educational platforms like Chicks vs. Estigma and Mujer Cannábica are helping in this respect, as is Mexican television show Tiempo de Cannabis, hosted by intrepid drug policy expert Zara Snapp. They’ve provided vital health information on the benefits and effects of cannabis, kept followers up to date on how cannabis culture is evolving, and visibilized responsible consumption and users of the plant — all of which are essential in combating mainstream media’s deleterious and criminal portrayal of weed.

Such justice has been a long time coming, particularly given that since President Felipe Calderón’s 2006 initiation of the War on Drugs — and even before — dissent against the government’s militarization and support for cannabis legalization has been led by the most valiant women in the political arena. And it’s mostly happened out of necessity, some of these leaders say. 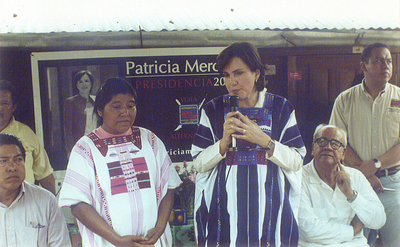 In 2006, Mercado became the first Mexican presidential candidate to include cannabis legalization in a campaign platform. Her race took place nearly six years after the first Mexico City cannabis legalization march and led up to her opponent President Felipe Calderon’s official launch of the country’s horrific War on Drugs upon taking office, which caused the disappearance of at least 62,000 people. In 2019 alone, Drug War violence killed 31,000 Mexicans.

Mercado wound up receiving more votes than any woman who previously ran for office, finding the most support among women between 18- and 29-years-old.

“Certain politicians told me, 'This is an issue for European countries, what does it have to do with Mexico?’ even though Mexico was already all the way inserted into the issue of drugs,” Mercado told MERRY JANE in a phone interview.

In November 2007, Elsa Conde, the Chamber of Deputies legislator, introduced the first federal bill to regulate medicinal cannabis. The bill sought to defend cannabis consumers from criminalization, replacing prison sentences with educational programs and legalizing home cultivation for qualified individuals. The Chamber’s Health Committee rejected the proposed legislation unanimously, with its president saying, “There is no scientific evidence that [cannabis’] use is superior to existing medications.”

Conde’s bill would become one of 22 cannabis legalization initiatives over the next 11 years that would go nowhere.

Legalization activists became optimistic when President André Manuel López Obrador (popularly known as AMLO) and his progressive Morena Party swept the presidency and both legislative houses in 2018. Drug regulation champion and former Supreme Court judge Olga Sánchez Cordero was in his inner circle. In the Senate, a month after Morena came to power, she introduced a cannabis legalization bill that would have approved home cultivation of 20 plants per individual, the establishment of a federal regulatory agency for cannabis, and cannabis consumption clubs with up to 150 members.

Alas, the bill did not advance. 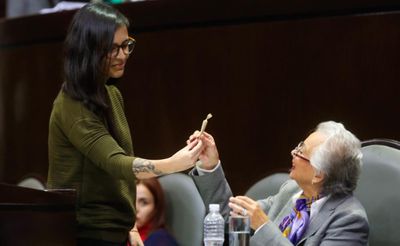 In 2019, another Mexican woman held the president and other high-up government officials to the anti-prohibition stances they had previously espoused. Ana Lucía Riojas Martínez, independent federal legislator, made headlines when she handed Sánchez Cordero — by then, the Minister of the Interior, the first woman to hold the position — a joint during a Chamber of Deputies session. Riojas says it was “a sign of memory, to say that we remember what you said, that you must remember that this is an unresolved issue, that there is a debt that has to be made right.” (Riojas says that Sánchez Cordero framed the jay, which now hangs in the minister’s office.)

Sánchez Cordero continued to push for the end of prohibition. In February, she advocated for the decriminalization of the opium poppy while substituting in for a quarantined AMLO at his daily morning conference. Mexican farmers in states like Sinaloa and Guerrero often have no other financial option but to grow opium for cartels, providing primary material that ultimately helps fuel the opioid crisis in the US. 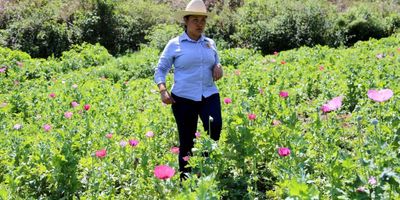 She is part of a growing chorus for poppy decriminalization that has included leaders like Dr. Yuritzia López Gómez, who spent time during her campaign for local legislator in Guerrero in 2018 calling for the legalization of the flower’s agriculture — she was once from a field full of the orange-red blooms.

In modern times, women leaders have been some of the boldest advocates for legalization. True to her roots as a queer cabaret owner, Senator Jesusa Rodríguez has staged several compelling political moments, from bringing a leafy cannabis plant to her desk on the Senate floor to donning a weed mask for a rousing and educational music video in 2020 that urged “the smoke to come out of the closet.” 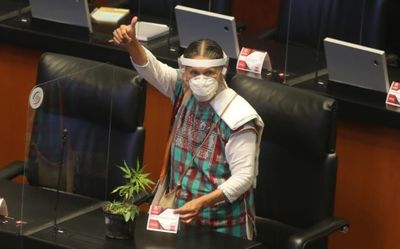 Martha Tagle, a Citizen’s Movement Party (known in Mexico as Movimiento Ciudadano) member of the Chamber of Deputies who sits on the lower legislative house's health committee, has also been a strident voice for cannabis justice. She believes that the legalization bill on the brink of being signed prioritizes private industry over repairing damages caused by the Drug War.

Two years after Riojas famously passed a joint in an official government meeting, she abstained from voting on the cannabis legalization bill for similar reasons.

Such refusals to accept compromise may speak to some women’s motivations for getting involved in the drug legalization movement in the first place. “I think many men come from a more machista perspective of 'you have to use force against force, weapons against weapons,’” Mercado says. “That's another kind of politics, a kind in which violence is strength.”

A gender-based approach to analyzing the War on Drugs has gained traction throughout Latin America, where women are often forced into low-paying, dangerous jobs in the drug trade, such as transporting product as a mule. Collectives like the Latin American Network of Anti-Prohibitionist Cannabis Women [RELAMUCA], Brazil’s National Network of Anti-Prohibitionist Feminists [RENFA], and Chile’s Cannábicas Latinas have been building solidarity around these issues and providing women cannabis activists with mutual support for years. In February, a coalition of these groups released the Cannábicas documentary, which collects testimonials from hundreds of individuals from over 30 countries. (Check out Mary Janes and Lady Buds for examples of similar projects in the US.)

Cannabis feminism in Mexico does run the risk of being co-opted by the capitalist hyperdrive of legalization, however. Pot isn’t even legal yet, but there’s already reason to be wary of appropriation. Mexico has seen surprising political forces hoist the feminist flag over the past few years — conveniently timed with the rise of the women’s movement.

The Institutional Revolutionary Party (PRI) that enjoyed hegemonic rule of the country for 71 years and the far-right’s National Action Party (PAN) maintain staunch sexist views. Yet, during AMLO’s administration, both conservative parties launched “feminist” campaigns that were not only geared toward stopping gender-based violence, both parties also lambasted their ostensibly leftist political opponent. (AMLO makes for an easy target in this respect — he has largely ignored or gaslit the women’s movement while in office.)

Cannabis feminism faces other, internal threats to its power as well. So-called trans-exclusionary feminism is on the rise in Mexico, typified by groups such as the Veracruz-based collective Brujas del Mar. Online campaigns led by these anti-transgender activists have successfully caused the censorship of much-needed trans voices in the mainstream media, such as Mileno’s Laurel Miranda, who saw three of her articles removed from a publication’s website under pressure from trans-exclusionary feminists.

But regardless of where the revolución con flores and other strains of Mexican women’s anti-prohibition activism leads in the future, its past and present are full of heroines fighting through a long, difficult struggle for peace and freedom. Riojas asserted that women’s leadership has been a major factor "for legalization and many other transformational issues.”

“I think it’s because we are the ones who historically have lived under oppression and disadvantage,” she says. “From there, the world looks different and you're able to see different possibilities for change and actions that those who have always been in power cannot.”

CULTURE
MEXICO
FEDERAL REFORM
POP CULTURE
MORE...
Caitlin Donohue
FOLLOW
Caitlin Donohue is a Bay Area-raised, Mexico City-based cannabis writer and author of She Represents: 44 Women Who Are Changing Politics and the World. Her weekly show Crónica on Radio Nopal explores Mexican marijuana culture and politics in the prohibition era. Follow Caitlin on IG @byrdwatch.
Share this article with your friends!
AD
By using our site you agree to our use of cookies to deliver a better experience.
Accept
Decline
MORE FROM MERRY JANE