CULTURE
Why Moon Rocks Are Actually the Worst Weed Product
AD
Moon rocks — cannabis flower covered in concentrates and rolled in kief — are highly priced, hyped, and potent. But beneath the smoke and mirrors, they’re nothing but a messy marijuana fad.
Published on April 17, 2019

America’s legal weed industry has facilitated the research and development of cannabis products at a pace that would make Silicon Valley blush. From the near-ubiquity of high potency flower dripping in white trichomes, to a gamut of recently-honed extraction techniques that offer new bouquets of flavor and effects, the cannabis available today is more intense than ever before. But for every new discovery or development, there are just as many products that don’t make the cut for the industry’s new high standards. And when it comes to green rush misses, moon rocks are at the top of my shit list.

Moon rocks, also known as caviar buds, are marijuana’s answer to the Long Island iced tea; they’re all about excess. A bud that’s been covered in sappy concentrates and rolled in kief, moon rocks are a multi-layered miniature boulder of densely-packed pot. Made both by professionals and green-thumbs at home, moon rocks are often comprised of a variety of strains, waxes, oils, and concentrates. Depending on the quality of ingredients, their THC content can spike well above 50 percent.

But at their core, moon rocks are pretty much a marketing scam used to sell low-quality cannabis at extreme markups to unsuspecting buyers. Consumers are drawn in by the allure of their supposed exclusivity and astronomical THC percentages, but moon rocks do not live up to how they’re hyped. In reality, they clog bowls, create unnecessarily sticky messes, and burn up quicker than you can pull. First popularized by California rapper Kurupt and producer Dr. Zodiak in 2014, moon rocks have since gained hype across the legal and black market as a luxury item, costing anywhere from $40-$65 per gram in cities like Los Angeles. On the black market, those prices can jump even higher. And like any other perceived premium product, it didn’t take long for moon rocks to turn into a full-blown cannabis consumer fad.

From California to Michigan — and particularly in states with adult-use cannabis laws like Colorado and Washington — moon rocks are known to fly off dispensary shelves. And in states without legal weed, thirsty stoners scavenge the black market for “caviar,” paying exorbitant prices to get their hands on the kief-dusted delicacies. Greg Shoenfeld, the Vice President of Operations at Colorado-based cannabis tracking firm BDS Analytics, told MERRY JANE that in 2017, pot shops in California, Colorado, Washington, and Arizona each sold more than $100,000 in moon rocks and caviar every month.

Pushing the hype even further, mere photos of moon rocks rack up thousands of ‘likes’ on social media, and rappers from Juicy J to Kodak Black, Young Dolph, and Young Thug have all name dropped the product in their lyrics. (To clarify, rappers are also known to name-drop “moon rocks” in reference to MDMA, but the songs linked here all refer to cannabis moon rocks.) 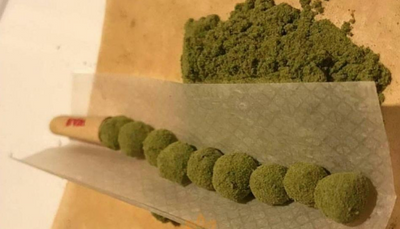 Beneath the smoke and mirrors, though, the layered and covered cannabis flower also acts as a spruced-up disguise for poor-quality product. Since the flower is covered in oil, and the oil is covered in a fine dusting of green or gold kief, consumers looking at moon rocks in a dispensary haven’t a clue what kind of flower or concentrate they are getting. Even black market dealers let you look at and smell the weed before you buy anythinig. With moon rocks, that quality assurance preview is shrouded in kief and mystery.

Understandably, I couldn’t find a licensed cannabis company that admits to using mid-quality flower and concentrates to make moon rocks. But a quick search for user reviews on sites like Reddit suggests that I am not the only one skeptical of the space-age buds. When it comes to consuming moon rocks, the process is no better than the product itself. Kief almost always gets stuck on fingers, scissors, and every other surface it comes in contact with, and the oil used in moon rocks is either too sticky or too brittle to be properly handled. And don’t even think about putting moon rocks in a grinder, or you’ll be on the way to the smoke shop for a new one before you even get a chance to smoke.

Once you figure out how to break up the extra sticky, kief-covered bud and get it into a glass pipe, the smoking experience leaves plenty to be desired. First off — as anyone who’s ever topped a bowl with the kief from the third chamber of their grinder knows — kief burns quickly. Combined with the slow burn of the oil and coated flower, your pipe will stay lit as soon as you start puffing, with smoke billowing from the bowl until you take another hit or tamp it out. And once you finish smoking, there’s always gratuitous globs of unpleasant black resin left behind in a moon rock’s wake. There’s a reason we consume cannabis concentrates in dab rigs: roasting extracts in a common glass pipe with a Bic lighter is nasty and just plain wasteful.

Above, a rare example where the moon rock quality is probably fire

Ultimately, the average green rush consumer’s obsession with all things THC is misguided altogether. Besides the fact that the cannabis plant is made up of a vast array of cannabinoids and terpenes that affect intoxication, THC percentages are wholly relative to consumption. In most cases, a gram of 20 percent flower rolled into a joint will save you a few bucks and do the trick just as well as 0.3 grams of a moon rock packed into a bowl.

So the next time you’re in line at your local dispensary and are contemplating an intergalactic addition to your normal order of flower, carts, and concentrates, save your cash and tack on another eighth to your order instead — you’ll thank us later.

420
POTENCY
PRODUCT
PRODUCT REVIEW
MORE...
IN THIS STORY
CBD
Click to shop at our CBD store
Zach Harris
FOLLOW
Zach Harris is a writer based in Philadelphia whose work has appeared on Noisey, First We Feast, and Jenkem Magazine. You can find him on Twitter @10000youtubes complaining about NBA referees.
Share this article with your friends!
AD
By using our site you agree to our use of cookies to deliver a better experience.
Accept
Decline
MORE FROM MERRY JANE