CULTURE
Why Is Weed Called the “Devil's Lettuce”?
AD
No dictionaries are required for this lesson on the lexicon of cannabis, but the history of this slang has some unfortunate and downright oppressive roots.
Published on August 29, 2019

The lexicon of cannabis slang is as rich as the history of the plant itself.

Back in the 1800s, cannabis was still commonly included in tinctures, tonics, and more, sold as “miracle cures” by aggressive salesmen in the US. If the product in their possession actually did contain any cannabinoids like THC or CBD, it made their concoction the rare exception to other, entirely worthless snake oils being hawked at town squares across the country.

In the late 19th century, no one in America really had an opinion on cannabis — though that would soon change. (Outside the West, however, cannabis consumption was common and traditional.) As this pivot was underway, those with influence realized that one of the most effective ways to convince people something is bad is to simply change its name. 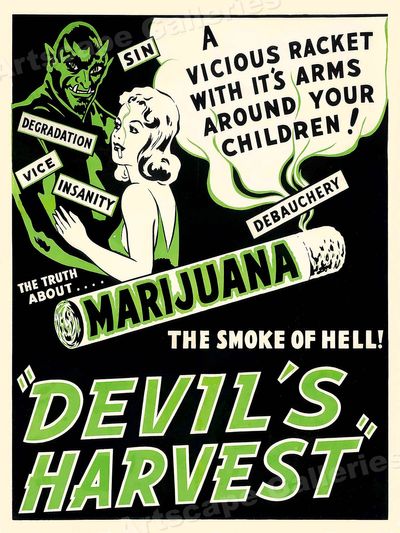 Where Did the Term “Devil’s Lettuce” Come From?

There is no definitive source to cite when it comes to the origins of this term, though there are clues. What we can look at is the culture at the time that the phrase came into vogue: the 1930s, when “Reefer Madness” first began. There are also references to “devil’s lettuce” and other unholy labels for cannabis on anti-weed film posters from the ‘30s and 1940s. False claims and smear campaigns against cannabis, often instigated by government institutions as an indirect means of enacting racist policy, are the real reason terms like “devil’s lettuce” and “marijuana” became such commonplace synonyms for cannabis.

An off-shoot of devil’s lettuce, “jazz cabbage,” more clearly highlights the nefarious, prejudiced intentions of the phrases popularized to describe cannabis as prohibition was burgeoning. Connecting pot — which, as a sidebar, is arguably the most neutral slang term for cannabis — to jazz not only insiuated that the plant was popular among the black musicians in which the genre was centered, but also that the music might be the result of “sinful” drug indulgences.

As history tells us, iconic trumpet player Louis Armstrong was one of the biggest stoners to walk the planet. The result? He's regarded as a legend — one of the most brilliant musical artists to ever live. If anything, he's proof that cannabis doesn't derail promising careers. There's also no evidence that it turns a sane mind violently psychotic. Yet, the lexicon to describe the plant continues to waver between progress and ignorance.

A survey of several of the most popular slang terms for cannabis reveals that racism and prohibition were at the heart of the plant’s early lexicon. (“Bogarting,” however, is directly tied to the actor Humphrey Bogart.) For instance, the term “marijuana” was popularized domestically in hopes of giving cannabis an “exotic” name (read: a Spanish term) to ultimately inspire collective xenophobia and push citizens to view the plant as dangerous.

According to the New York Times, “marijuana” was introduced to the English language as recently as 1874 — roughly thirty years after the conclusion of the Mexican-American War. That’s either a wild coincidence, or an obvious precursor to a decision to link cannabis to America’s most recent enemy of the time. The answer was made abundantly apparent when the US passed the Marihuana Tax Act of 1937 (spelled with an “H”), and effectively instigating the first step towards full prohibition. 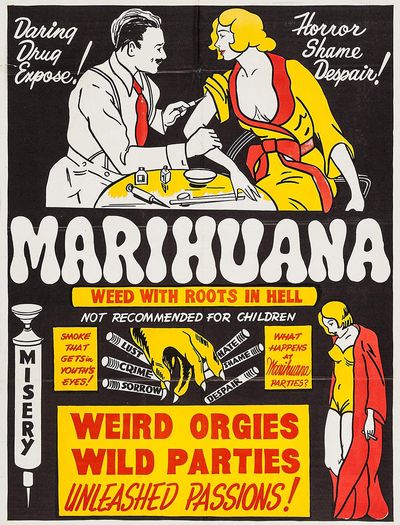 Harry Anslinger, commissioner of the Federal Bureau of Narcotics, authored the 1937 Marihuana Tax Act, which imposed a tax on the sale of hemp and marijuana, and propelled a racist campaign against the drug, linking it to homicidal mania, suggesting its principal users were black people and Latino immigrants, and insinuating its effects included minorities forgetting their place in American society. Anslinger warned of what happens when black male college students share joints with white female students. After “smoking and getting their sympathy with stories of racial persecution,” he concluded the result would be “pregnancy.” William Randolph Hearst helped subsequently spread fear-mongering anti-marijuana propaganda in his newspapers.

Do Words Really Matter This Much?

Yes! Even “weed” has an arguably negative connotation, as it implies that cannabis is an invasive species stealing space and resources from other, more worthy plants. Conversely, some now see weed as an almost ironic way to describe a plant that's clearly the antithesis of an unwanted crop. In a sense, taking back a term and defining new ownership of it is a pivotal facet of the cannabis industry’s assimilation to the mainstream. That said, the use of the term “stoner” is still a hot-button topic.

It’s arguably best to leave terms like “marijuana” and “devil’s lettuce” to the dust of history, given they were popularized as a form of malice and oppression. However, another term that was meant to suggest evil has been reclaimed, as well.

We will likely always think of the PSA series known as  Reefer Madness when we hear the term “reefer." But some companies have decided to have a bit of fun with the phrase, given that it’s so directly tied to one of the government’s most ridiculous, inefficient efforts to defame cannabis (and that’s saying something).

As is the case with virtually everything: we can always look to words to provide a parallel history to our subject of focus. When it comes to pot, the story could honestly be condensed to how we got from devil’s lettuce to cannabis as the default term. At the very least, delving into the etymology of pot offers an immensely valuable survey of the plant’s evolution from pariah to panacea.

HISTORY
CULTURE
PROHIBITION
GOVERNMENT
MORE...
IN THIS STORY
CBD
Click to shop at our CBD store
Zack Ruskin
FOLLOW
Zack Ruskin is a cannabis and culture journalist living in San Francisco. Follow him on Twitter: @zackruskin.
Share this article with your friends!
AD
By using our site you agree to our use of cookies to deliver a better experience.
Accept
Decline
MORE FROM MERRY JANE