CULTURE
Which Countries Have the Worst Drug Possession Laws?
AD
As more and more countries update their drug laws, it’s good to know where you stand if you’re caught with a particular substance while traveling.
Published on February 4, 2019

While drug use is something that occurs throughout the entire globe, the laws penalizing individuals caught with an illicit substance differ dramatically based on where you are.  In places like the United States and Canada, the failures of prohibition have led leaders to reconsider ineffective and cruel drugs laws, especially for non-addictive substances like cannabis.

The same can’t be said for other countries, where punishments for the possession of drugs range from public canings and floggings to automatic death sentences. As more and more countries update their laws — and international organizations like the World Health Organization reconsider cannabis and its legality — it’s good to know where you stand if you’re caught with a particular substance while traveling. To wit, the following is a breakdown of the countries with some of the harshest drugs laws on the planet.


Despite China reinventing itself with massive developments in recent decades, the county also maintains the highest number of executions annually. And, usually, the punishment is doled out for drug charges. For example, under the Anti-Drug Law of the People's Republic of China, 50 grams or more of heroin or meth can lead to the death penalty. The country also frequently exercises its power to execute foreigners. In 2007, China earned the “gold medal” in executions, killing 470 people. The next year, 374 were executed during the Summer Olympics Games in Beijing. Cannabis is persecuted in China, but the data supporting arrest statistics is limited at best. Still, a younger generation is beginning to embrace the plant, regardless of the government’s strict stance on substances.

In Saudi Arabia, drug solicitation almost always results in the death penalty — including for crimes regarding cannabis. The sobering reality of cultural differences is especially evident here. Apart from dismembering journalists, Saudi Arabia also beheaded 48 people within a four-month span for nonviolent drug charges — drawing sharp criticism from world leaders. On July 17, 2018, the government killed seven drug traffickers in a single day. If you’re not executed, you might be flogged instead. In this region of the Middle East, drugs like captagon, an amphetamine, are most popular. 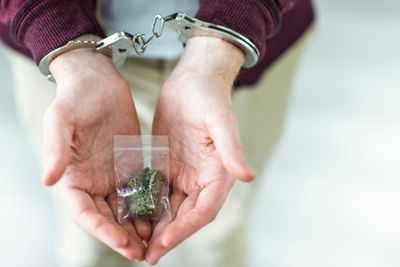 Despite the glamour and appeal of Dubai, The United Arab Emirates doesn’t take drug possession lightly. “The UAE has a zero-tolerance policy for recreational use of drugs,” the country’s government warns. If you are caught with even a tiny trace of a controlled substance, you may be automatically deported. You can also be punished with hard time in prison for failing to pass a drug test. On top of this, casual tourists are often shocked about the threat of prison for not reporting medications at Dubai customs. “Oops. Off to jail you go.”

President Rodrigo Duterte assumed office on June 30, 2016, and one of his major selling points during his election bid was the promise to kill “tens of thousands” of drug dealers. He also strongly urged his people to seek out and kill drug addicts on their own as vigilantes. The Philippines’ proximity to Southeast Asia’s “Golden Triangle” — Thailand, Laos, and Myanmar — makes it ground zero for certain drug trade. But the country’s reaction to substance use complicates the matter.

Under The Philippines Dangerous Drug Act, the death penalty is encouraged for 0.3 ounces or more of opium, morphine, heroin, cocaine, cannabis resin, or at least 17 ounces of cannabis. Does violence beget violence? Stay tuned. There is good news on the horizon, however. House Bill 6517 was recently advanced in the country’s House of Representatives, which would legalize medical cannabis for people suffering from debilitating conditions and exempt patients from the country’s bloody drug war.

Iran ranks number two worldwide in executions, but recently eased some drug-related death penalties. Malaysia also imposes the death penalty for some drug offenses. In Vietnam, possession of 1.3 pounds or more of heroin is an automatic death penalty. Indonesian authorities also do not hesitate to execute drug dealers via a firing squad, like eight foreigners who were recently executed, two of which were part of the “Bali Nine.”

WORLD
LEGALIZATION
CRIME
LIST
MORE...
Benjamin M. Adams
FOLLOW
Benjamin Adams is a freelance writer whose work has appeared in a slew of publications including CULTURE, Cannabis Now Magazine, and Vice. Follow Ben on Twitter @BenBot11
Share this article with your friends!
AD
By using our site you agree to our use of cookies to deliver a better experience.
Accept
Decline
MORE FROM MERRY JANE