CULTURE
Where You Smoke with @WhereYouSmoke: Waterside Stoners Explain Why THC and H20 Make a Mighty Combo
For this week’s edition of our photo column, we decided to focus on some aquatic smokers, meaning potheads who like to light up on the beach, on a boat, or in the middle of a damn lake.
Published on July 25, 2017

Each week, we’ve asked @WhereYouSmoke to share a few favorite Instagram uploads with MERRY JANE, and so far it’s been nothing but picturesque snaps and chill-ass stories to boot. For this week’s edition, we decided to focus on some aquatic smokers, meaning potheads who like to light up on the beach, on a boat, or in the middle of a damn lake. THC and H20 are quite the combo — just ask any bong owner ;) Before we dive into some interviews, @WhereYouSmoke had this anecdote to share:

On a family trip to Lake Tahoe, I went out on the lake with some friends to water ski. I had water skied before, but I wasn’t that good. Out on the boat, my friends and rolled up a few Js as we played some tunes and got ready to get in the water.

My friend went first, and he’s a pretty seasoned water skier. After a few successful rounds, he signaled that he was ready to come back in, and so I decided to go next. I jumped in the water, which was the perfect, late-August temperature, and readied myself on the skies. I struggled to get myself up the first few rounds, and each time the boat was going back around, I just floated in the clear, blue water, faded and enjoying the views around me.

Finally, on the third try, I got up. Around the lake we went, and I could see my friends smiling and waving to me from the boat. There were lots of other people on the lake, and I could see them smiling and cheering me on. I was pretty impressed with myself, since this was only my third or fourth time water-skiing, and seeing all these other boats cheering me on was a dope feeling. After a little while, I noticed that literally every boat we passed was laughing and cheering at me, which seemed a bit strange given I wasn’t doing anything that special… that’s when I looked down to that — surprise! — my top had come undone and was nowhere to found. Bursting into laughter, I let go on the handle and sunk back into the water, absolutely hysterical with laughter. There I was, thinking I was the queen of the skis, when really I was giving all of Lake Tahoe a one-woman show, too high to notice I was totally topless.

Back on the boat my friends and I laughed for a good twenty minutes and we continued smoking. “Why didn’t anyone say anything?!” I demanded jokingly. “We were trying!” They all said, but needless to say it was next to impossible to hear them, or differentiate between what signals they were trying to give me. This hilarious moment was slightly embarrassing, yes, but an amazing reminder of why being high on the water is so damn fun — for many reasons, and for everyone involved.

All interviews have been edited for length and clarity... 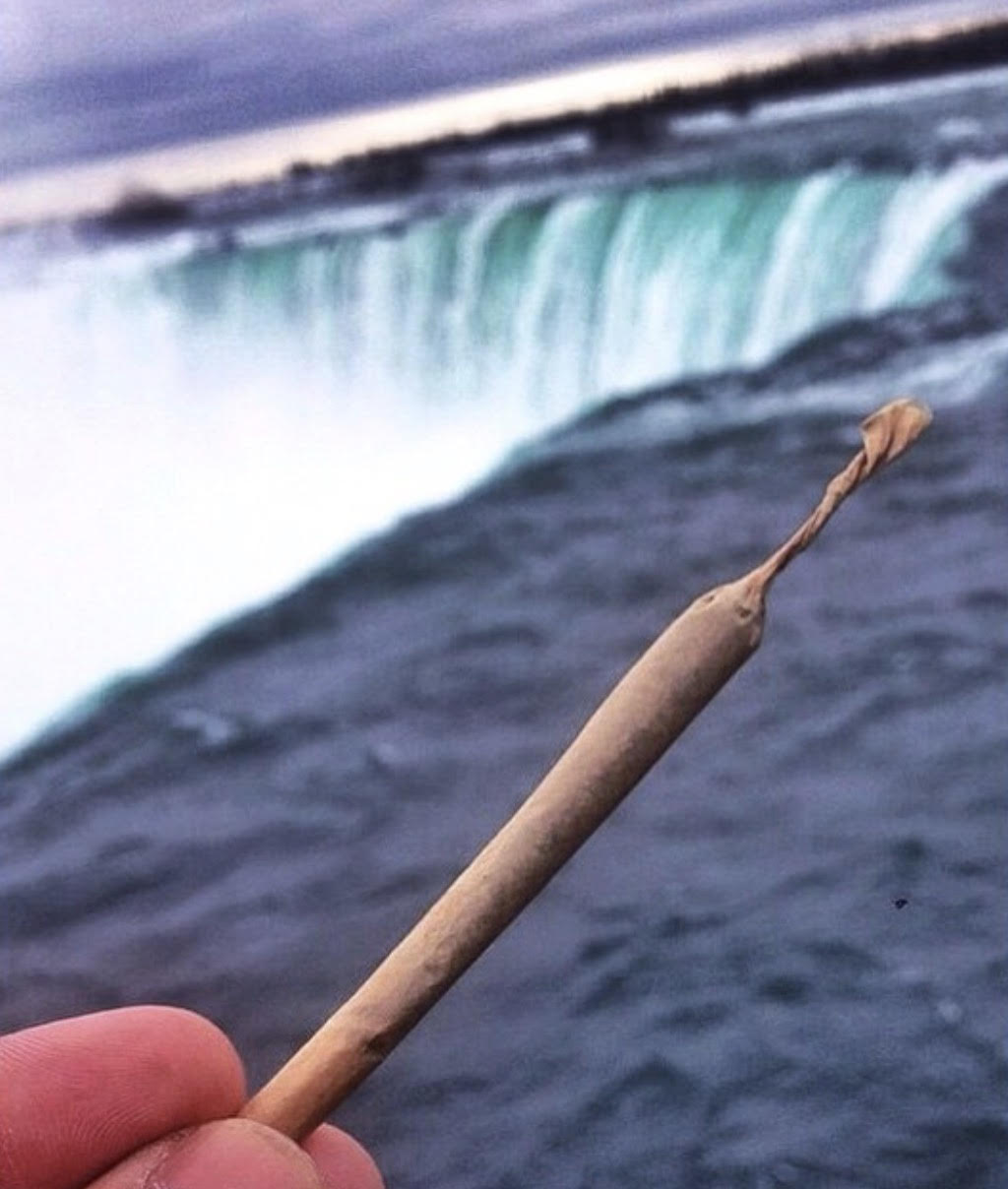 @WhereYouSmoke: Where was this photo taken?
@skiedougie: This photo was taken in Canada by Niagara Falls. My family and I were on a road trip around Canada and this was part of our itinerary. We drove from Toronto all the way to Niagara, and had some wine before arriving to the falls. Niagara is known for their wine, too! It was a day of walking around with family, and spending some quality time at the fairgrounds with my cousins. When we were on land, right by the waterfall, and I could literally touch the water if I wanted to!

What do you love to do when you’re faded?
I would say watching some of my favorite shows on my 50” TV. I also like to watch some critical thinking documentaries and some conservation docs.

What do you find gets the most enhanced for you when you’re lifted?
I would say my enhanced mood is what really matters. After I smoke, I feel much more appreciative of the environment around me and the people, and the purpose of what I do throughout the day is clear to me.

What do you find to be special about being faded in nature?
Honestly, I smoke because of its meditative aspect. It does not really enhance the nature view to me because nature alone is beautiful. I do like the idea of thinking about my life with nice sceneries, though. “What am I doing now, am I satisfied, am I enjoying my everyday life, job, friends? Do I want to visit the Maldives, Ecuador, Jerusalem? Where's the next destination?” While looking at a view, weed helps me visualize where I will be next.

I'm an Aquarius. With that being said, the water is part of my personality. I also am a scuba diver and I grew up in the oceans of the Philippines. I also stay up in the mountains and hike to the waterfalls when I'm there. I find the water very relaxing and the flow is always continuous. Quite similar to my pace in life, I enjoy being versatile and can feel comfortable in most situations. It's not that I prefer smoking around the water, but it has proven to be one of the most extraordinary places to clear my mind and enjoy my life. 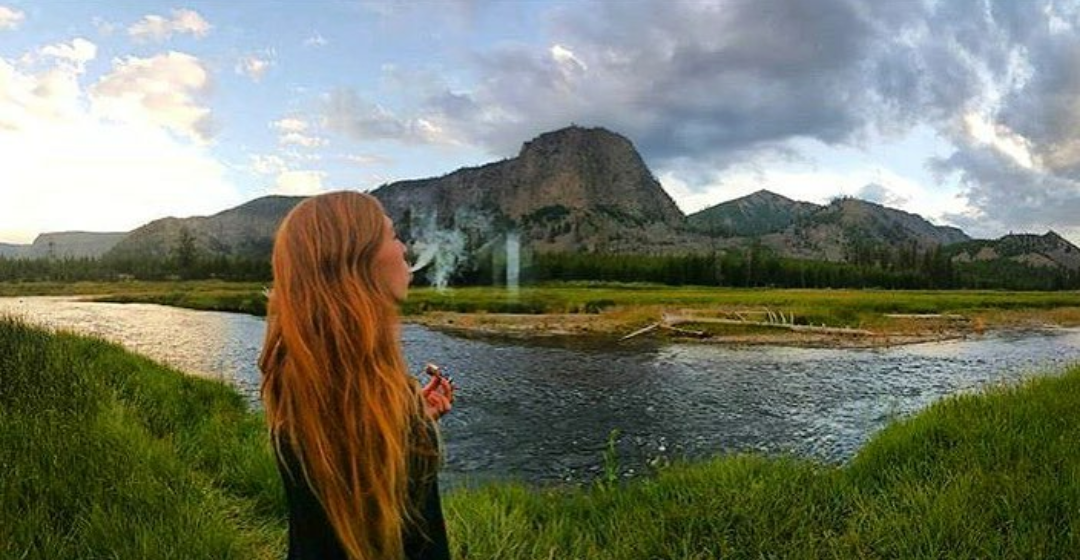 @WhereYouSmoke: Where was this photo taken?
@oneloveonecatie: This was in Yellowstone… my friend Sierra and I were driving down the road and decided to pull over for the sunset. We just started walking and ended up at this spot. It was beautiful!! We had seen so much wildlife that day, like bald eagles, elk, bison, even wolves howling in the morning. It was one of the most incredible places I have been!

What do you appreciate most when smoking outdoors?
My favorite part would have to be the feeling of freedom and appreciation for the world around me. You know when you get up to the top of a mountain and want to celebrate with a beer? It's the same thing with smoking. When you’re out in nature, you feel so relaxed. When you add weed to it, it's 10x better. I feel such a connection with the world around me when I smoke.

What do you love about the water when you're piffed?
Smoking by the water is definitely my favorite. All my life, I've grown up somewhere around water. I spent a lot of time in Hawaii, so I would always go to a beautiful spot, watch the waves, and smoke with the sunset. I guess that's what started my love for smoking by the water, and it's just stuck with me ever since. It's honestly one of the most relaxing feelings to me.

You’re now living in Colorado… What’s it like to smoke legally?
I actually moved to Colorado shortly after it was legalized… and no I am not one of those people who came here specifically for that reason. When I did move here, I was so stoked to be able to get a medical card and felt so good about the fact I wouldn't get in trouble for it. I don't think I could chose one place I love to smoke at the most because it's seriously all so beautiful. If I had to choose, it would probably be on top of any mountain during sunset. It's like you’re on top of the world. 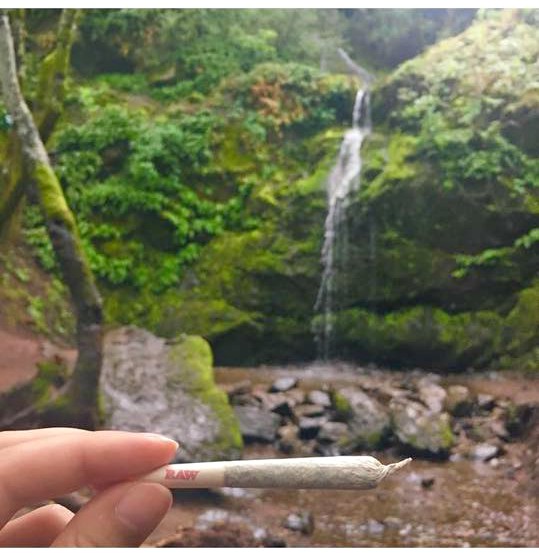 @WhereYouSmoke: Where was this photo taken?
@carliethoma: This photo was taken at the Arroyo de San Jose Waterfall in beautiful Marin County, California. It was a warm and clear day and the morning after rain, so a friend and I decided it was the perfect day for a hike. We drove to the hiking trail and walked along the path surrounded by vibrant green trees and crisp air to this gorgeous flowing waterfall covered in moss. We got super lit and the day was all-around good vibes.

What do you love to do when faded?
Pretty much all of my friends smoke except for one or two. Our favorite thing to do is venture out with a nice J and find a dope view to sit and enjoy it at; the pretty look-outs are countless in Marin.

So you must like blazing outdoors?
The best part of smoking in the outdoors with my friends is having genuine, real-ass talks while enjoying all that nature has to offer. It's a great time to clear my mind and to sort of refocus my energies and put things into perspective.

Where's your fave spot to light up?
One of my favorite places I've ever smoked would have to be at Alamere Falls in Point Reyes, which is a giant waterfall with three separate cascades that flows directly onto the beach and back into the ocean. It was absolutely breathtaking — and not just because it was an 11 mile hike. There weren't too many people there so we were able to pretty casually post up and smoke a couple J's while having a nice picnic. I guess you could say I'm on a mission to find more amazing water to sesh by – so stay tuned!

420
TRAVEL
INTERVIEW
PHOTOGRAPHY
MORE...
@WhereYouSmoke
FOLLOW
@WhereYouSmoke is an Instagram account and online platform run by an anonymous artist. Visit http://whereyousmoke.com/ for more about his photo journeys alongside the herb.
Share this article with your friends!
MORE FROM MERRY JANE