CULTURE
Where You Smoke with @WhereYouSmoke: Jamaica Week Edition
AD
For a special installment of our hazy travel column, we’re spotlighting outdoor tokers who snapped pics of their sesh on the island nation en plein air. Happy Jamaican Independence Day and cheers!
Published on August 1, 2017

This article is part of MERRY JANE's Jamaica Week. For more on this special series of articles and videos, visit our Editor's Letter here.

Each week, we’ve asked @WhereYouSmoke to share a few favorite Instagram uploads with MERRY JANE, and so far it’s been nothing but picturesque snaps and chill-ass stories to boot.

For this week’s edition of our photo column, we decided to focus on folks lighting up in Jamaica. With Independence Day right around the corner and MERRY JANE going in with Jamaica Week, it felt right to spotlight some avid smokers who snapped pics of their sesh on the island nation. Before we dive into some interviews, @WhereYouSmoke had this anecdote to share:

In the summer of 2014, I went to Jamaica with my good friend, just the two of us. Every day was a brand new experience and adventure, but one day in particular was exceptionally amazing. We decided to go out on a boat, and had what must have been 16 joints and four 6-packs of Red Stripe. Our captain was amazing — he was down with our stash but was always making sure we were getting our buzz on responsibly.

First, he took us to this cave right in the side of an enormous, stunning mountain, and handed us some fishing rods. We cast out our lines, sitting back and lighting up our Js. We played some Sister Nancy and Barrington Levy, and just then a fish starts stroking my line and I was able to reel it in. Once I managed to get the fish on board, the captain took over and started slicing us some meat right then and there. Picture this: chill music, serene views, a new homie and an old friend, and now a pure, succulent slab of fresh sashimi. I will never forget this incredible moment — the delicious food, the water, the land, and most of all, the people.

All interviews have been edited for length and clarity 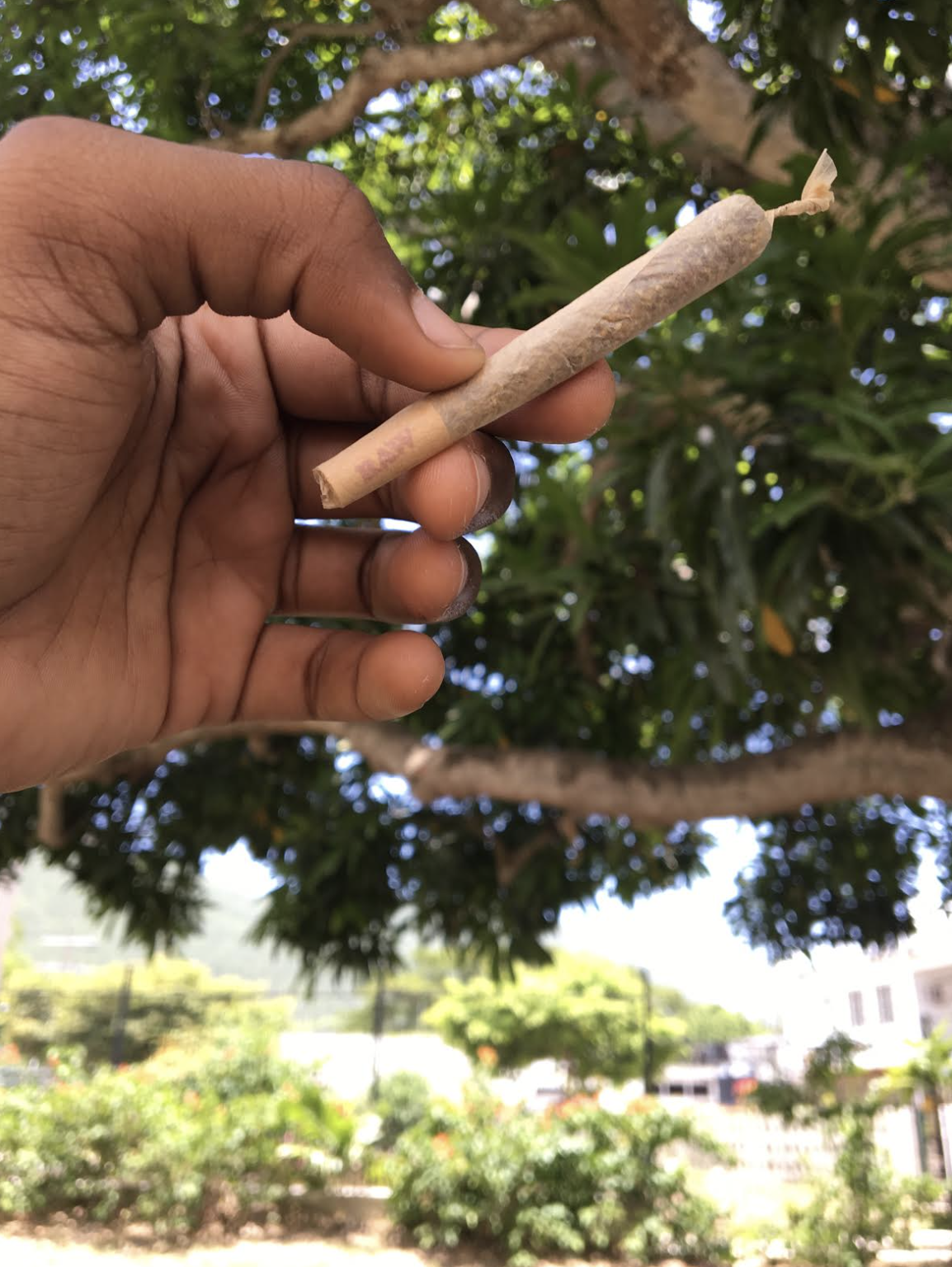 @WhereYouSmoke: Where was this photo taken?
@beforeweshutitdown: OK, so I’m Jamaican and I live here, so this is actually my regular spot. It’s pretty close to where I live and it’s very chill, cool, and quiet. Perfect for a smoke under the Jamaican sun.

What’s the dopest spot you’ve ever lit up in Jamaica?
That has gotta be by Straun Castle in Red Hills. Gorgeous view overlooking the mountains, lush greenness surrounding you, extremely relaxing. It’s just always a good vibe. Plus, Jamaican herbs can be some of the best in the world, so you know it’s going to be lit.

What are your fellow Jamaican stoners like?
At my usual spot, I see mostly people my age chilling after school or on the weekends. But the general weed culture in Jamaica is amazing. There’s definitely a lot of street rolling and palm crushing. Most people smoke our local brand of Lion Pride rolling papers. They’re pretty smooth and affordable. A lot of people smoke “grabba” (I do, too), which is just our word for unprocessed tobacco leaf. Mix that in with your highgrade and it's a party. You can almost always find a buddy to light up with, and it’s definitely a way to bond with certain people and join certain social groups. Weed makes everyone friendlier.

What do you love most about being faded outdoors in Jamaica?
What I love most about smoking in Jamaica is the ease to get product. There’s always a guy around, usually with some grades of decent potency for very cheap. Herb, papers, and grabba are very affordable, and if you’re more of a connoisseur you can definitely find stronger strains for really good prices, as well. I also love the camaraderie in the smoking community. You always get hailed when you have a spliff :)

As a local, do you have any advice for people visiting?
If you’re a tourist, know that you’re likely to get charged more than a local. If you can link up with a local, do it and let them buy for you. 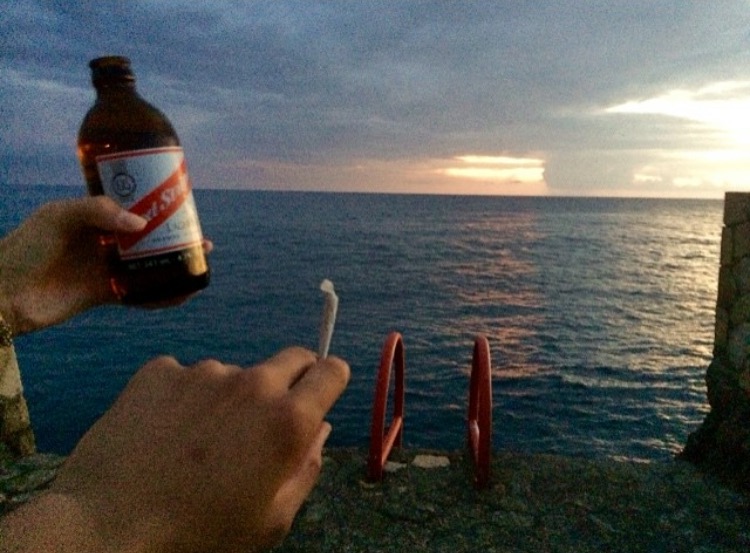 @anonymous
23-Years-Old
Photo Taken at the Rockhouse Hotel in Negril, Jamaica in January 2015

@WhereYouSmoke: Where was this photo taken?
@anonymous: This photo was taken near the Rockhouse Hotel in Negril, specifically at a little cutty spot off the beaten path. A lot of beachside Negril is underdeveloped. With that being said, there are plenty of areas that are breathtaking with no one inhabiting them. The day was one of my best to date. We got a whole branch of bud for $40 and it had to be over an ounce. Lasted me the whole trip!

How did you find your bud out there?
We found the bud from our cab driver. I jokingly asked him, “So where’s the bud around here?” He looks back and goes, “How much?” and I say “$40.” He pulls us on a 10-min detour runs into a lil hut on the side of the road. At this point, I thought I was being set up to be honest, but he eventually comes back with the branch of weed. Wow, it was such a vibey, clear, sustainable high.

What did you love about being faded in Jamaica?
The best part of Jamaica was smoking with the locals. We’d cheef huge, finger-sized joints without crutches. When some of the locals would get down to the roach, they’d un-roll it in their hand and start wrapping the next one even bigger and better. It seemed like a old-school version of recycling. The aura of Jamaica’s people is the best I’ve ever experienced. Very welcoming and a pleasure to be around. 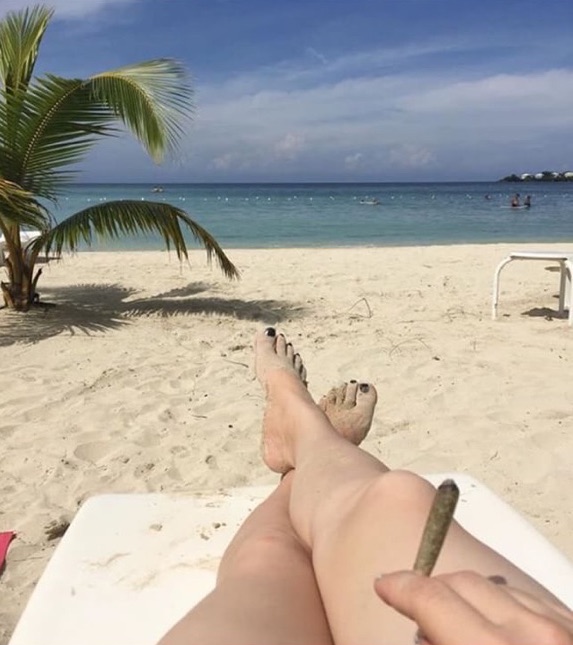 @WhereYouSmoke: Where was this photo taken?
@ms_kushtush:  This photo was taken at “Couples” in Negril. We were there for the High Times Cannabis Cup in 2015. This day was beautiful, warm, and breezy. The High Times Cannabis Cup also included the Rastafari Rootz Festival, which was a day and night event that took place on 7 Mile Beach. During the day, there were vendors and food stands. At night, there were reggae and dancehall performers on a huge stage on the beach. Selling, buying, and smoking cannabis was all legal, as long as you were inside the festival.

What’s a funny high memory from your trip?
One time when we were in a cab, our driver told us, apropos of nothing, "Bob Marley has 16 children... that we know of!" I was cracking up.

What was the best element of blazing in Jamaica?
The best part about blazing in Jamaica is that it is so widely accepted and you can do it in the sunshine with a piña colada in your hand and reggae playing in the background. It just doesn't get much better. I got to smoke at Rick's Cafe during a private party at sunset — that was beautiful. Also, go see a Jamaican cannabis field if you can. There are tours everywhere if you ask around... Go to Orange Hill.

420
WORLD
TRAVEL
INTERVIEW
MORE...
@WhereYouSmoke
FOLLOW
@WhereYouSmoke is an Instagram account and online platform run by an anonymous artist. Visit http://whereyousmoke.com/ for more about his photo journeys alongside the herb.
Share this article with your friends!
AD
By using our site you agree to our use of cookies to deliver a better experience.
Accept
Decline
MORE FROM MERRY JANE