CULTURE
Where You Smoke with @WhereYouSmoke: When One Joint Just Isn't Enough
AD
This week we talked to some tokers who always come prepared before blazing outdoors. Wolverine claws made of Js? Yes, please.
Published on July 11, 2017

Each week, we’ve asked @WhereYouSmoke to share a few favorite Instagram uploads with MERRY JANE, and so far it’s been nothing but picturesque snaps and chill-ass stories to boot. For this week’s edition, we decided to talk to the stoners who prefer being extra prepared… by always having extra green on deck. Wolverine claws made of Js? Yes, please.

Before we dive into some interviews, @WhereYouSmoke had this anecdote to share:

On a particularly beautiful day in early summer, I was driving to a friend’s house with my boyfriend, just blasting our favorite music and chatting about our summer plans. As we were getting close, we gave him a call to let him know we were about to arrive, and he suggested that we go on a hike in Malibu. “There’s a big swimming hole,” he told us, and we were sold. He was with some other homies, so he decided to drive as well, and so we rolled up to his house and followed him to the Bu.

As we drove, I sat in the passenger seat and rolled up as many Js as I could. When we finally arrived, I had at least 10 rolled up, and as we started the walk to the swimming hole, we lit up two of the spliffs. Walking down the path, spotted with sun and shade, we all laughed and talked and shared stories from the past week.

When we arrived at the body of water, it was kind of crowded, but we went for a quick, faded dip anyway. After a little water, we wanted to light up again, so we went around the back of a big rock off everyone was diving off of  into the water.  We climbed up the rock  and all sat in a big circle off to the left, and continued our sesh. It was such a  gorgeous day, and it was an awesome relief to have all the spliffs we needed to just bask in the summer breeze and enjoy the company of all our closest homies.

All interviews have been edited for length and clarity. 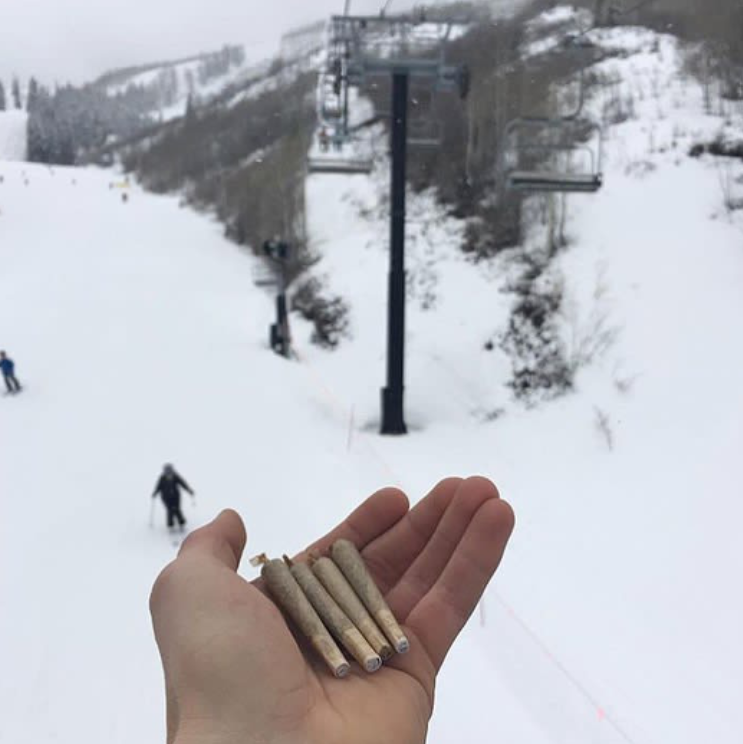 @WhereYouSmoke: Where was this photo taken?
@pirate_eyes_: This photo was taken in Park City, Utah. We were boarding and blazing like always!! I am a snowboarder and skier and smoker! I love the outdoors and spend no time indoors.

Do you always smoke spliffs?
I smoke heavy spliffs, which are my favorite, but I also own a bong that I smoke out of if I'm not rollin’ up.

What’s your reasoning for always having multiple Js on you?
On a normal day on the slopes, I'm rolling up an average of 4 to 6 doobies for my day! It puts me in my own world and zone. On top of that, if you ever find me on the mountain you can get ready to get ripped. I love to share with everybody that I can!

What’s your favorite high snack?
I love to eat fruit when I’m blitz! I love all kinds of fruit — it makes me feel good on the inside and gives me plenty of energy. I have so much love for Mother Earth and the things she has. Nothing better than burning bud out in the middle of nowhere with Mother Nature!

@WhereYouSmoke: Where was this photo taken?
@emkateawesome: This picture was taken in my father's homeland of St George, Maine. It’s about three and a half hours from my hometown and we were up there visiting with my grandparents, but decided to head to our favorite spot for a scenic burn. The day was gloomy, which is my favorite kind of day to burn because it’s more mysterious :)

Where did you learn to roll?
I remember watching my dad roll up my entire life. He would do it right on the living room table. The first time I ever tried surprisingly came out mad good for my first time. I guess from watching my dad and brother roll up my whole life; I like to think it’s in my genes ;)

Why did you have multiple Js that day?
We had multiple because we knew we were going on a long trip and didn't want to have to waste time rolling up in a car when we could pre-roll and just enjoy the road trip. Of course we smoked them all! It was a long, glorious day filled with friendship and blunts. I smoked these with my favorite people in the world to smoke with, my brother and my boyfriend. We sat on the rocks overlooking the sea and shared memories of my dad, picturing all the times he smoked in the same spot we were sitting when he was a teenager.

What’s the most beautiful part of nature when you’re blazing in the great outdoors?
Nature is where I feel most connected to absolutely everything. My dad died in 2011, and one of his favorite things was to smoke outside with the trees and the sea. So whenever I want to feel the closest to my dad, that’s what i do — I blaze outside by the trees or the sea. Nothing better than fresh air while you burn it down :) 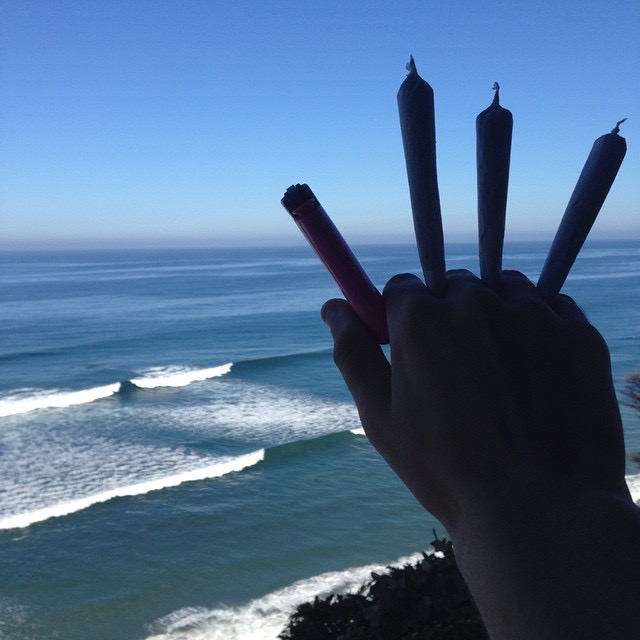 @WhereYouSmoke: Where was this photo taken?
@mehdymane: The photo was taken from my balcony, during the day... it was a solid day. I’m blessed to live at such a dope smoke spot. I had so many Js that day because I didn’t have backwood for the meantime. Big smoke > little smoke.

How do you find other dope spots for seshing?
I usually find out about dope smoke spots from snapchat, or finding one yourself after knowing the area pretty well, which can take a while but is well worth it.

What’s music do you like to blast while you blaze?
Favorite music to listen to... I can’t choose off the top of my head. But, I could always snap a bowl to ‘Still Blazin’ by Wiz Khalifa. Blazing in silence is fire as well, but the only time that happens for me is when my phone dies. That’s when I can listen to the waves crash and hear my bowl snap and crackle.

420
WORLD
TRAVEL
INTERVIEW
MORE...
@WhereYouSmoke
FOLLOW
@WhereYouSmoke is an Instagram account and online platform run by an anonymous artist. Visit http://whereyousmoke.com/ for more about his photo journeys alongside the herb.
Share this article with your friends!
NOMINATE YOUR POWER PLAYER
AD
By using our site you agree to our use of cookies to deliver a better experience.
Accept
Decline
MORE FROM MERRY JANE