CULTURE
Where You Smoke with @WhereYouSmoke: Hitting Double Black Diamonds While Burning Bud
AD
For this week’s column, we decided to pretend like it's not summer and spotlight some skiers and snowboarders who blaze before carving up fresh powder.
Published on July 5, 2017

Each week, we’ve asked @WhereYouSmoke to share a few favorite Instagram uploads with MERRY JANE, and so far it’s been nothing but picturesque snaps and chill-ass stories to boot. For this week’s edition, we decided to pretend like it's not summer and spotlight some skiers and snowboarders who blaze before carving up fresh powder. It goes without saying that we don't encourage any smokers to get fucked up before surging down a giant mountain. But for some veteran skiiers, weed is a must before hitting the slopes. Before we dive into some interviews, @WhereYouSmoke had this anecdote to share:

Last winter, I went to Mammoth Mountain in California with some friends, my first ski trip without my family. We were staying in an apartment that belonged to one of our friends, and when we arrived we were eager to get on the slopes. Before making our way to the mountain, we rolled up at least 10 joints in preparation for our rides. My one homie and I hadn’t been skiing in several years, whereas some of our other friends had been skiing consistently, so we decided to go down some greens and blues before heading to the larger, more challenging slopes.

While we were on the ski lift, we sparked up one of our Js and enjoyed the view, just chatting and laughing and wondering how we were about to fare on our first ski in half a decade. When we reached the top, we hopped off the lift and slowly made our way over to the slope. As we stood there, my friend started to panic a little bit. “I don’t think I can do this,” she said to me, talking herself out of it. “Of course you can!” I said. But she was not having it, and before I could convince her otherwise, she had somehow managed to get an employee on a snowmobile to give her a ride down the mountain.

So there I was, faded and standing atop a mountain all by myself. I was a little nervous, but I was really excited to be out in the snow — growing up in LA, chilling in the snow was a rarity. So I popped in my earbuds, took one final look around, and began to make my way down the mountain. Curving from left to right, right to left, the wind blowing across my face and my music blasting in my ears, I was truly in a winter wonderland. I could feel every sensation so vividly, from the muscles in my legs flexing to the orange hue my goggles were casting on the bright, white snow. Everything was simply heavenly. Not only did I recall how to ski, I was killing it! Up and down I went all day, blazing each ride up the ski lift and then flying down different slopes, music blasting. Combining skiing, weed, and my tunes was undeniably one of my favorite experiences smoking in the great outdoors.

All interviews have been edited for length and clarity. 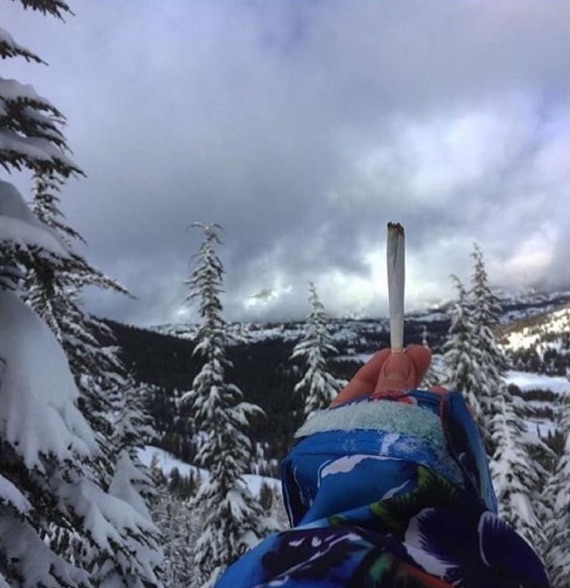 @WhereYouSmoke: Where was this photo taken?
@dillybong: This photo was taken in December, 2016 when my best homies and I drove up to Tahoe just after I turned 18. That day was so raw — we cheefed and snowboarded at Kirkwood. The weather was perfect and I remember we went super off-trail through the closed zone and found some crazy powder and built a jump right after we smoked the joint pictured above.

What does smoking in nature do for you?
When I blaze outside compared to inside it's a very different experience. Smoking indoors will usually make me lazy and I'll end up writing music or watching Jay Alvarez and Sam Kolder videos. But if I smoke outdoors, I'll usually go surfing or filming or skating or go explore some dope spots around the Bay Area.

What do you enjoy most about blazing and boarding?
Coming from a small town at sea level, my mind and body immediately experience changes when I get to the mountains. When I get high and snowboard, it literally feels like I'm floating on clouds. I've been snowboarding for about 12 years so I'm confident in my abilities after smoking. It's honestly not something I would recommend if you're a beginner because your mind and legs disconnect to an extent and your mind just observes the mountain as you’re cruising down and just appreciating life.

How do you find weed when you travel?
When I travel around the US, I can usually find weed or order it, but usually I travel internationally where it can be a problem, depending on where I am. I'm not always looking for it, but if I can stumble upon weed then it's always a plus! 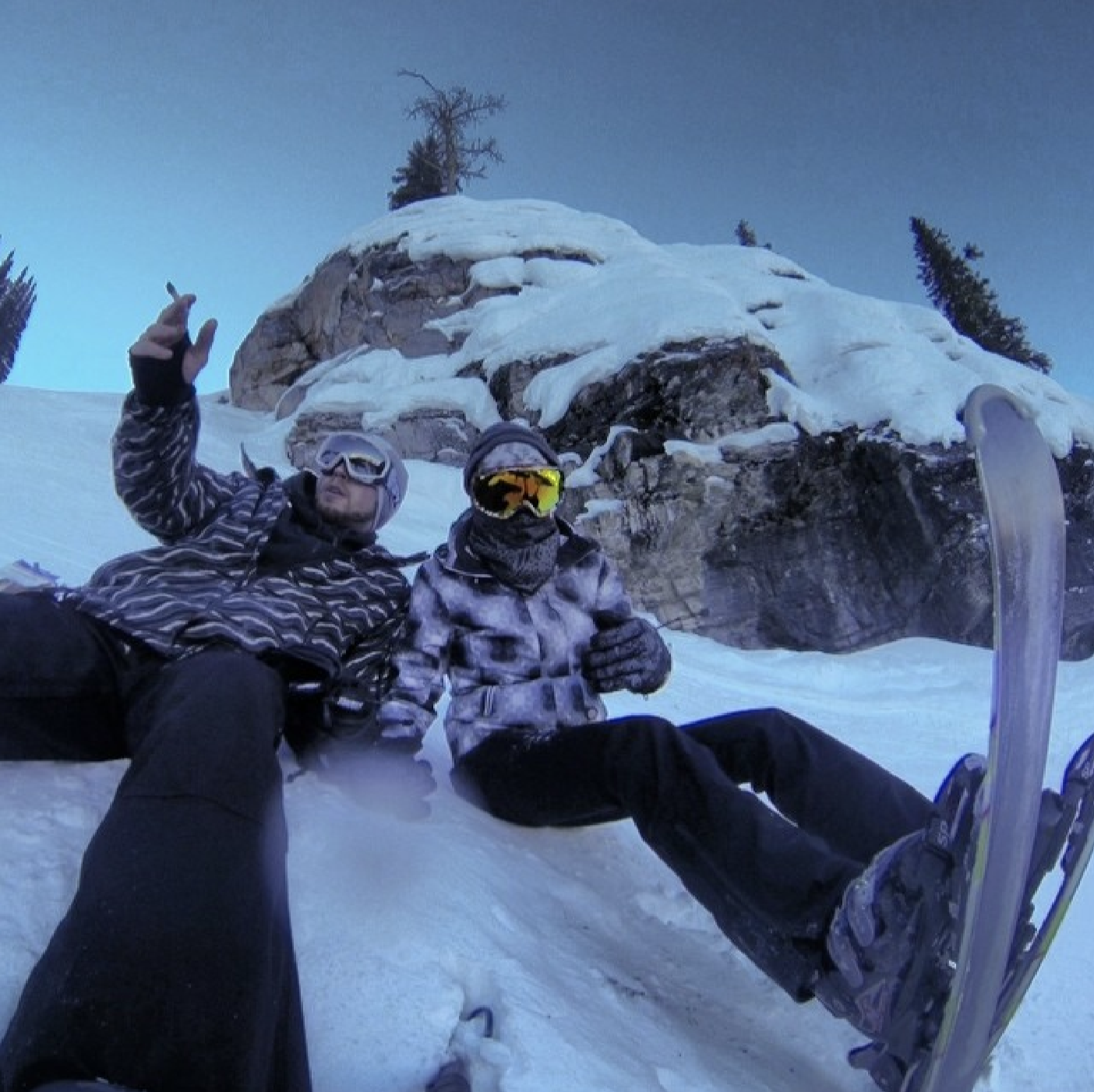 @WhereYouSmoke: Where was this photo taken?
@lukekmk: This photo was taken at Sunshine Village Ski Resort in Banff National Park, which is in Alberta, Canada. These were from a "birthday trip" for myself back in February of 2014. Any day on the ski hill is a blessing. If I could ski/snowboard full time, I'd do it in a heartbeat.

Do you prefer blazing and skiing, or blazing and snowboarding?
I've skied my whole life, the first time I was on skis I was only one year old. Back when I was around 22, I decided to take up snowboarding... My first run of the first day, I fractured my wrist! That didn't stop me, though. I've still been snowboarding to this day. I'm pushing myself to be as good on a board as I am on skis... I'd consider myself an expert skier, or at least very experienced. I get frustrated sometimes on the board because I know I can "do this" on skis. One of my favourite things to do is blaze on the mountain because the scenery is unbeatable. There is only ONE downside to toking up on the hill: It gives you the fear! Sometimes I'll sit myself on top of a double black diamond (the most challenging run possible on any ski hill) smoke up, stand up, and think to myself, “What have I got myself into this time?”

Why do you prefer being in nature when you blaze?
I find smoking while being outdoors and active much more fulfilling than sitting at home and being a couch potato. When you’re outdoors, you actually are able to appreciate the high and take in your surroundings, whereas you’re really missing out if you’re sitting at home eating junk food and watching mindless TV. Not only that, but I find that you lose motivation and end up sleeping half the time when you smoke at home. 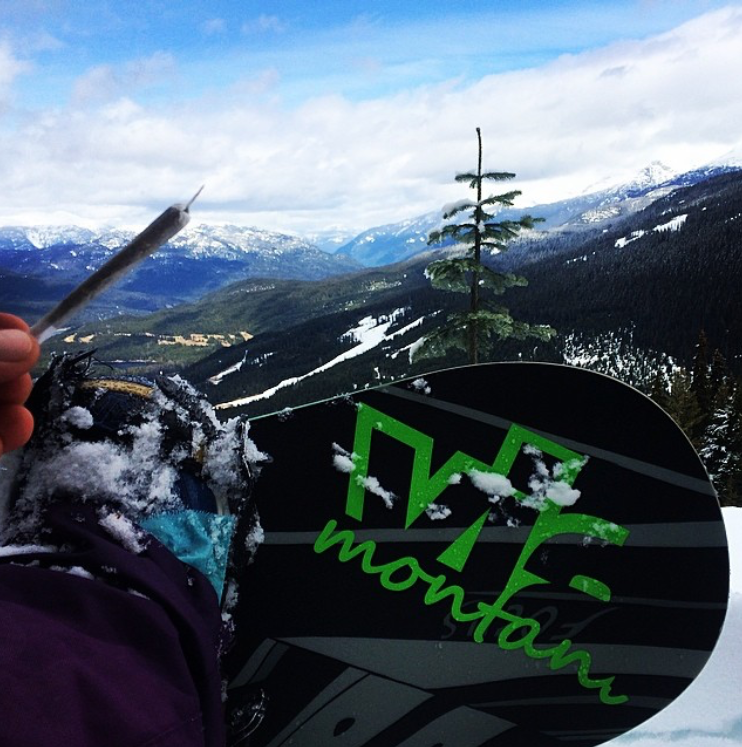 @WhereYouSmoke: Where was this photo taken?
@brunorie: This pic was taken at Whistler Blackcomb, a major ski resort in BC, Canada. We got to the place where the photo was taken by foot, and we had to walk about 30 minutes up a hill to get there. We found some super sick powder, so of course we had to get high at this point. We rolled up a doobie and had a rad time crushing the fresh snow.

What’s something awesome that’s happened to you while blazing and boarding?
I met my best Canadian friend by asking him, ‘Hey man, do you smoke weed?’ And he was like, ‘Fuck ya, of course!’ So we went back to my truck and had a joint in it, leading to us becoming really good friends.

Do you ever add the third element of music to your blazing and boarding routine?
Man, music is a big thing. I like to hear to all kinds of shit, like country in the truck, deep old hip hop on the slopes, and some random stuff all around. Snowboarding high gives you a totally different feeling when riding the powder. I feel blessed doing what we are doing. Being high makes it more fun to stick around with friends in nature and see the mountains. It makes me appreciate that I’m able to do what I really love to do.

TRAVEL
INTERVIEW
PHOTOGRAPHY
COLORADO
MORE...
@WhereYouSmoke
FOLLOW
@WhereYouSmoke is an Instagram account and online platform run by an anonymous artist. Visit http://whereyousmoke.com/ for more about his photo journeys alongside the herb.
Share this article with your friends!
NOMINATE YOUR POWER PLAYER
AD
By using our site you agree to our use of cookies to deliver a better experience.
Accept
Decline
MORE FROM MERRY JANE