CULTURE
What Weed Strains Will Chill You Out During a Halloween Panic Attack?
AD
The spooky season is here. You may need some weed to deal with it. Here’s how to figure out which buds will keep you chill, whether you’re escorting some trick-or-treaters or tripping balls at a haunted house.
Published on October 31, 2019

The Halloween holidaze provides adults an excellent excuse to play dress-up, if even for just one night. But while most of us glide through this evening without a care in the world, some of us may not deal so well with big crowds, monsters jumping out intending to scare the shit out of you, or twisted makeup that’s indistinguishable from real-life mutilation.

Thankfully, Ms. Mary Jane can and will come to the rescue.

Maybe you’re about to enter a haunted house for the first time, and you’re concerned you may take a swing at the first werewolf to leap out at you. Or maybe you’re escorting the kids while they trick-or-treat in the nice neighborhood, which can bring its own anxiety-ridden headaches. Or perhaps you get tense when your doorbell rings every 10 minutes, despite leaving your porchlight off and a sign on the door that says, “Go Away. No Candy.”

If you need to keep chill on Fright Night, here’s a handy guide for figuring out which weed strains you should toke to maintain your seasonal sanity.

For the record, everyone responds to cannabis differently, and even identical strains can produce different effects when they’re grown by different people. While we will include lists of trusted strain names, we’d rather give you the tools to figure out what works best for you, rather than present a one-size-fits-all product guide. 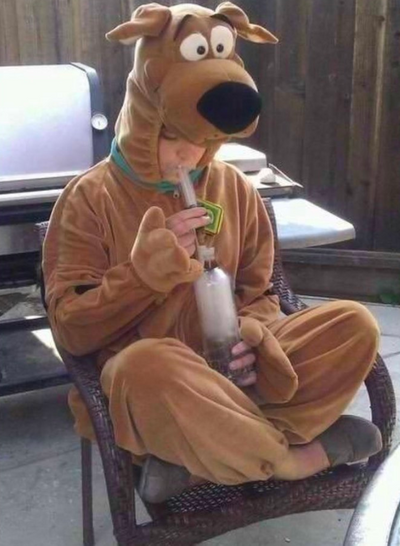 THC, the component of weed that gets people high, can both relieve stress or increase it. And while intense paranoia may be exciting while you’re watching a horror flick in the comfort of your own home, it may work against you at a crowded nightclub or haunted house. So, if you’re one of those people who gets super-nervous on high-THC weed, you may want to try something that’s got ample amounts of CBD, which can balance out the edge caused by THC.

While hemp flowers typically contain the most CBD of all smokable weed products, hemp can’t get you lit. And this is freakin’ Halloween. You want to get lit like jack-o-lantern, right?

Check Your Terpenes, Too

While scientists still haven’t confirmed what effects terpenes have on our highs — if they even have any true effects at all — there’s some sagely folk wisdom that suggests yes, terpenes can affect the kind of high you’ll experience.

A few human studies have confirmed that some terpenes, when inhaled through the nose, can reduce anxiety, too. The ones with the greatest potential for chilling you out are pinene, phytol, limonene, linalool, and beta-caryophyllene. If you use the smell test to distinguish terpenes in your flower, shake, or pre-rolled joints, you want your schnoz to pick up citrusy, flowery, spicy, and piney scents, which most strongly correlate to limonene, linalool and phytol, beta-caryophyllene, and pinene, in that order.

If you’re lucky enough to live in a state with legal weed, your local regulations may require lab testing data for the products. Many dispensaries now include terpene data along with cannabinoid levels (THC and CBD), so you can suss out which available strains may contain the four chill-out terpenes mentioned above. 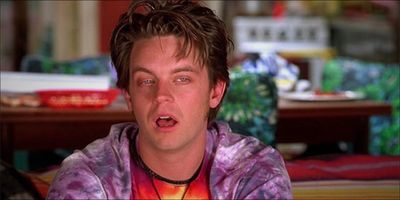 Which Strains Are Known for Keeping Tokers Chill?

If you don’t live in a place where weed is legal, or your dispensary doesn’t provide terpene data for its weed, you can always rely on a strain database to give you some ideas.

Keep in mind that unless your dispensary sources its weed from the strain’s original breeder, you don’t genuinely know if you’re smoking that exact strain. Furthermore, a bud’s contents can vary depending on how it was grown.

But anyway, according to Leafly and Weedmaps, here are some popular weed strains according to their dominant terpene content.

Gallery — Look Out for These Spooky THC Treats:

And here’s a short list of weed strains that offer a relatively good balance between THC and CBD content: Argyle, Cannatonic, Pennywise, Sweet & Sour Widow, and Dancehall. These are known as “one-to-one” (1:1) CBD-to-THC strains, though the ratio may not always be exactly one-to-one.

You could even top-off your favorite THC-rich weed strain with some CBD flower to round out the high. Some suggestions include: Harlequin, Charlotte’s Web, Treasure Island, and ACDC.

Regardless of how you go about your smoke-filled Halloween escapades, keep your friends close and your weed closer! Nothing will ruin a fun, spooky night out like shitting yourself after some random drunkard jumped out and yelled, “Boo!” from behind the bushes.

420
STRAINS
HALLOWEEN
CULTURE
MORE...
IN THIS STORY
CBD
Click to shop at our CBD store
Randy Robinson
FOLLOW
Based in Denver, Randy studied cannabinoid science while getting a degree in molecular biology at the University of Colorado. When not writing about cannabis, science, politics, or LGBT issues, they can be found exploring nature somewhere in the Rocky Mountains. Catch Randy on Twitter and Instagram @randieseljay
Share this article with your friends!
AD
By using our site you agree to our use of cookies to deliver a better experience.
Accept
Decline
MORE FROM MERRY JANE