CULTURE
What Puts the Purple in "Purp" Weed?
AD
We usually associate cannabis with green, but the plant’s flowers come in a variety of colors. Why exactly does this happen?
Published on March 18, 2019

The cannabis plant, like any other plant, contains several classes of chemicals. Cannabinoids like THC and CBD remain the most famous, but terpenoids like pinene and myrcene are gaining popularity as the public learns more about cannabis. Flavonoids and polyphenols are additional compound categories slowly coming to the forefront as researchers continue to crack cannabis’s biochemical profiles.

The purple color found in cannabis comes from another category of molecules called anthocyanins. Technically a blue-purple pigment, anthocynanins are responsible for the full range of cooler colors displayed by cannabis plants, from blue to violet. Other purply plants, such as plums and eggplants, also produce anthocyanins. Additionally, these compounds may confer health benefits, such as antimicrobial or antioxidative properties.

The green in cannabis comes from chlorophyll — the little verdant organelles that generate the plant’s energy from sunlight. Anthocyanins naturally reside in all cannabis plants, but the presence of chlorophyll often buries the purple light that would otherwise reflect from the flowers.

Because of chlorophyll’s purple-masking effects, anthocyanins become most visible after the curing process breaks down some of the buds’ chlorophyll. Growers can also force the coloring by fiddling with temperatures in a grow room. 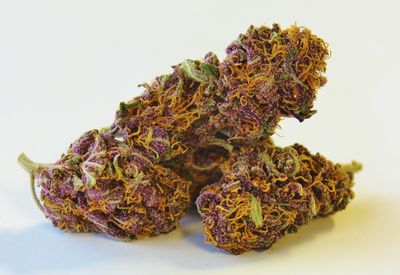 How to Grow Weed So Purple It’s Practically Black?

Black weed? That’s a real thing. BC Bud Depot in Canada sells a plant called The Black known for its unusually dark, deep violet shade. Although The Black’s lineage is a mystery, it likely doesn’t grow this way on its own.

In fact, it’s possible to cultivate purply cannabis plants in a way that minimizes chlorophyll production. To do this, simply lower the temperature during the 12/12 light cycle to 10°C (50°F) during the dark phase.

By lowering the temperature, the plant behaves as if autumn just started. Like brown and red maple leaves littering the streets in the fall, triggering a false autumn forces cannabis to cease chlorophyll production. If the plant already produced ample amounts of anthocyanin – strains such as Black Widow, Black Mamba, Black Diesel, or The Black – with the green gone, it will eventually appear black due to the anthocyanin concentration.

For growers looking for feeds or nutrients to jack-up anthocyanin production, there aren’t any. Only climate changes and genetics can get Mary Jane looking so regal.

AGRICULTURE
STRAINS
CULTURE
FARMING
MORE...
IN THIS STORY
CBD
Click to shop at our CBD store
Randy Robinson
FOLLOW
Based in Denver, Randy studied cannabinoid science while getting a degree in molecular biology at the University of Colorado. When not writing about cannabis, science, politics, or LGBT issues, they can be found exploring nature somewhere in the Rocky Mountains. Catch Randy on Twitter and Instagram @randieseljay
Share this article with your friends!
AD
By using our site you agree to our use of cookies to deliver a better experience.
Accept
Decline
MORE FROM MERRY JANE