CULTURE
What It’s Like to Infiltrate Criminal Organizations as a “RatSnake”
AD
MERRY JANE spoke to former ATF agent Vincent A. Cefalu, whose new book details the lives (and double-lives) of undercover operatives tasked with breaking up organized crime.
Published on July 30, 2019

All photos courtesy of the BenBella Books

The Bureau of Alcohol, Tobacco, Firearms and Explosives (known as the ATF or sometimes the BATFE) was founded in 1972 to protect the country from violent criminals, acts of arson, bombings, and terrorism, the trafficking of firearms and explosives, and the illegal diversion of alcohol and tobacco products. It was originally part of the Bureau of Internal Revenue, but the history of the ATF can be traced back to prohibition agent Eliot Ness and “The Untouchables,” the infamous crime fighters who battled Al Capone and his bootlegging gang in Chicago.

Despite its colorful history of law enforcement, the agency has faced criticism in recent times for its mishandling of the “Fast and Furious” investigation (unrelated to the film series), and the Waco and Ruby Ridge cases in the early 1990s. The ATF has developed a reputation for hard-charging agents who are hellbent on capturing the most nefarious bad guys, even if it means breaking the law themselves.

Just ask ATF operative Vincent A. Cefalu, who witnessed the inner-workings of the agency for 30 years and recently came out as a whistleblower. He claims that the law enforcement group has severe accountability issues, and the former agent would know: Cefalu worked in a specialty unit within the ATF, serving in a role that’s known as a “ratsnake” — someone who works deep undercover to break up organized crime groups.

In Cefalu’s new book, RatSnakes: Cheating Death by Living A Lie — Inside the Explosive World of ATF's Undercover Agents and How We Changed the Game, he offers readers an inside look at what it was like to work undercover, a job where one slip-up could cost you your life. To the ATF, “ratsnakes” were a necessary evil, as undercover agents could move through the criminal ranks and hierarchy with ease. These enforcement officers would go so far undercover that no one would ever suspect they were working for the feds.

The book dives into the risk-laden and secretive careers of these “ratsnakes.” In chapters like “Snake Code,” “Executive Douchebags,” and “The Cost of Doing America’s Business,” Cefalu explains how one approaches a clandestine operation, details moments when his cover was almost blown, and discusses what it was like to live a true double-life. MERRY JANE got in touch with the former agent and author to chat about the new book and get some insight into the trade. Here’s what the one-time “ratsnake” had to say. 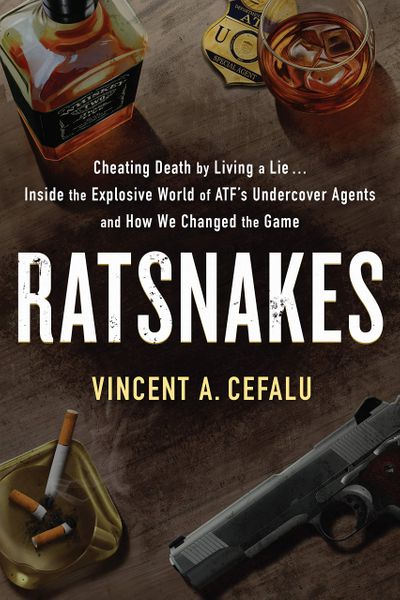 MERRY JANE: When did you decide to write a book about your career in the ATF, and why did it feel like the right time?

Vincent Cefalu: I actually started a very loose diary, for lack of a better word, or outline, in 2006. I did it because, collectively, we —  "The RatSnakes" — often discussed our dynamic world and were afraid our actions would be lost to history. Plus, having worked with such dynamic people within such a dynamic program within ATF, I felt their stories should be immortalized. I got serious about putting together a book around 2014 when I retired. Although I had to tell the stories through my eyes, the book is actually about this crew of undercover agents.

Why are undercover agents within the ATF called “ratsnakes”?

It was a moniker that was floating among us. It is said that the pioneers kept "ugly" ratsnakes in jars out of site. When rodents infested their homes, they would let the snakes out to hunt down and kill all the nasty rodents. When they were done, they would be placed back in the jar until the next infestation. Much like the snakes, ATF undercover agents were not the favorite children of the Bureau, and they kept us pretty much hidden until they needed us again.

How did you first get involved in law enforcement and the ATF and what made you decide to pursue that career path?

Since I was a young teenager, I was involved with law enforcement, only on the receiving end. I was a thug as a kid, so I had way too many interactions with law enforcement. I actually admired them. After a judge gave me a choice, jail or the Marines, everything changed. I became a military policeman and loved it. Then I became a street cop and loved that even more. It was nice not having to look over my shoulder anymore. I crossed paths with some feds over time and thought they were larger than life. Eventually, I met some ATF special agents, and that was it. They had a super robust undercover program, and since I came from the streets, it was only natural that I would return to them. That's it in a nutshell. My street experiences as a kid sort of prepared me for later undercover roles. It was a natural fit. 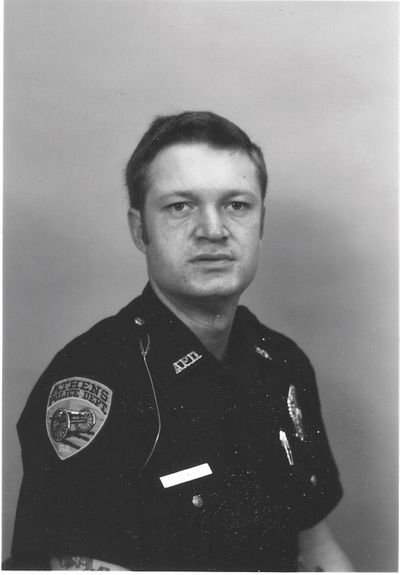 Most people think of the ATF as the law enforcement group that targets bikers, is this true and why?

The 1 percenter bikers, as I call them, put themselves in our sights decades ago with narcotics, firearms trafficking, and violent crimes. The truth is, biker cases make up a super small portion of our prosecutions. Because we had many cases over decades, across the entire country, we have followed their activities closely. We don't target them, but we don't ignore them, either. They have shown throughout history they are worthy of law enforcement attention. Notice I said 1 percenter clubs.

My personal opinion is that the Hells Angels and every club like them are gangs and criminal enterprises. In my humble opinion, when your [group’s] written bylaws are anti-law enforcement and have severe penalties for talking to law enforcement or reporting crimes, it's probably a “where there's smoke, there's fire” situation. Again, I am speaking of outlaw motorcycle gangs, aka 1 percenters.

What’s it like being undercover, playing a role, and being out there with only your own wits to keep you safe?

It's scary. It's challenging. It's exciting. It's an ever-changing environment and can evolve in seconds. You never know what to expect and have to pretend none of what goes on around you surprises or shocks you — even if it shocks the shit out of you. It's way different than traditional law enforcement where you can usually summon up all the backup you need in an instant. An undercover agent knows that even if you have a great cover team just down the block, they probably can't get to you fast enough when a meeting goes to shit. The best they can do is recover your body and/or call an ambulance. We try not to think of that during the process. What's the diciest moment you’ve ever experienced, and have you ever felt like your cover was about to be blown?

My partner and I had infiltrated a prominent biker gang. We came up with the idea to drop one of our wallets at the clubhouse knowing they would rifle through it. Of course we had fake shit in the wallet — pictures of naked women and other shit bikers might have. Unfortunately, a couple things in the wallet sparked their paranoia and they called us into the clubhouse to question us. They separated us, and when I got called in, the chapter president placed a .357 Magnum revolver on the table to start the interrogation. We worked the problem as planned, and they came away satisfied… or I'm quite certain I wouldn't be around to answer this question.

Why do so many undercover agents seem to have problems with the administrative types in law enforcement?

Undercover agents don’t conform strictly to normal policies and practices. If a uniform officer gets beat up, they must report it, make an arrest immediately, and prosecute the crime. An undercover may have to take the beating and come back at a later date to pursue the prosecution, so as not to compromise the undercover. That's just one example. There is a great deal of liability having your subordinates operate in a secret environment with very little oversight. Bad things can happen and the suits don't like to have to explain bad things. They'd rather just keep everything squeaky clean. But, of course, that’s not possible on all undercover assignments. Sometimes undercover meets happen in strip clubs or brothels. Sometimes there is drug use going on in an undercover’s presence. Most undercover events don't happen in churches. How do you go from living a lie to adjusting back to your regular life?

This is clearly the most challenging part of the job. It gets confusing sometimes. When you find yourself enjoying the dirty side of life more than your conventional side, it's time to take a break. We have protocols in place to help ensure that doesn't happen. But sometimes you are in and out so much that you can have some personality fragmentation. We train hard and constantly evaluate our undercovers to minimize the effects of prolonged undercover operations. We are just like everybody else, though. We love our kids and our wives and husbands, play sports, like cookouts, and that stuff is way stronger than a little adrenaline rush from meeting a bad guy.

What do you think about cannabis culture and what is the ATF’s relationship to it?

I grew up in the San Francisco Bay Area in the ‘60s and ‘70s. We were the original cannabis culture. It's gotten really complicated now for law enforcement and especially the ATF. Law enforcement officers don't get to infuse their enforcement of the law with their personal beliefs, no matter which side of the argument they are on. The elected officials are solely responsible for making law or changing laws. There are statutes that ATF enforces that are tied to federal narcotics laws, which currently include marijuana. One particular statute becomes troublesome with regards to marijuana: 18 U.S.C. Sec. 922 (g). This statute says if you are a user of illegal narcotics, which marijuana currently is under federal law, you may not possess a firearm. There are others, but in my mind, this law and state marijuana laws are on a collision course. 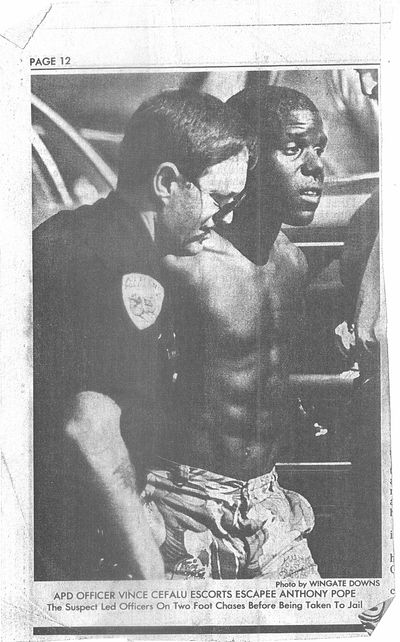 What do you think of the War on Drugs in retrospect, now that cannabis is getting legalized nationwide?

Since this question was directed solely at me, I will share my thoughts. I think the emphasis placed on marijuana over the decades could have been better spent fighting heroin, cocaine, designer drugs, and those drugs that are literally killing our youth. The problem with ignoring the marijuana trade is that huge violent criminal organizations benefit from trafficking weed. When cartels and that sort profit so much from marijuana, it's hard to look away and try to decipher who is a hippie grower from Humboldt County and who is a trafficker from Mexico. Just because it's hard to stop the flow of fentanyl into the country and onto our streets doesn't mean we shouldn't try.

For more on “RatSnakes,” order your copy via BenBella Books here

BOOK
HISTORY
CRIME
POLICE
MORE...
Seth Ferranti
FOLLOW
Seth Ferranti makes documentaries, films, comics, and writes for VICE, Penthouse, and OZY, among other publications. He spent 21 years in prison for LSD conspiracy charges and is now out in the world reaching for the sky. http://www.sethferranti.com/
Share this article with your friends!
AD
By using our site you agree to our use of cookies to deliver a better experience.
Accept
Decline
MORE FROM MERRY JANE