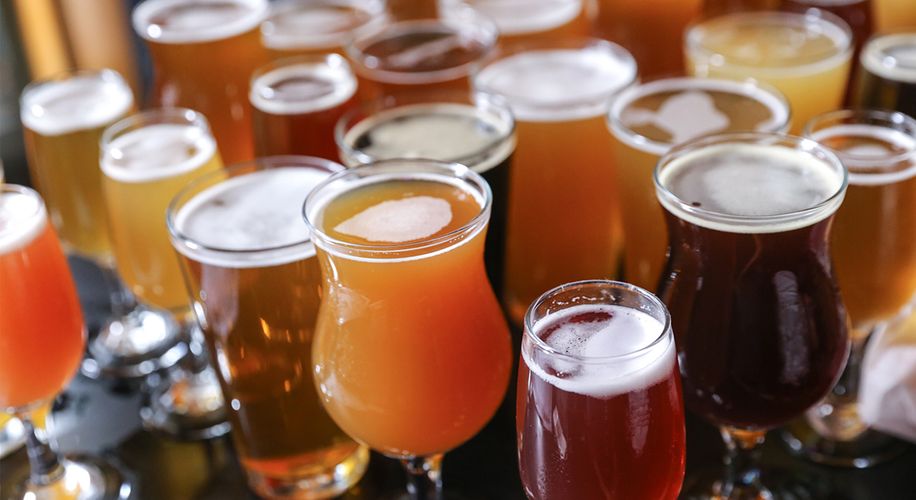 A look inside a clandestine craft brewery in Brooklyn that produces the “Irie PA” — a true cannabis-infused beer that’s 6% alcohol by volume and contains 25 milligrams of THC.

A look inside a clandestine craft brewery in Brooklyn that produces the “Irie PA” — a true cannabis-infused beer that’s 6% alcohol by volume and contains 25 milligrams of THC.

All photos courtesy of the author

As the popularity of recreational cannabis has grown from a wisp of smoke to a thick plume in recent years, a new demand has emerged for products marrying weed with other food and drinks. While consumers can now obtain weed-enhanced soda, candy, and pretty much every other type of foodstuff, many cannabis producers and business owners are keen on pushing the limits of infused products. To wit, one segment of this new class of ganjapreneurs is focused on combining weed with another wildly-popular but once-illegal drug — beer.

Craft brewers in states like Oregon, Colorado, and Vermont have already introduced beers made with cannabis ingredients. They include hemp-seed, CBD, and terpenes that add special aromas and flavors to their drinks without getting their customers high. Lagunitas, a well-known brewer, even hopped on the trend with its Supercritical IPA. On the other hand, Blue Moon founder Keith Villa recently announced that he's working on developing a non-alcoholic, THC-infused beer that will debut in Colorado later this fall. This drink will get its consumers high — but not drunk.

So unfortunately for fans of both bud and suds, there remains no commercially-available product containing alcohol and THC. (But that hasn't stopped some growers from experimenting.) This is due to regulations established in 2000 by the federal Alcohol and Tobacco Tax and Trade Bureau (TTB), stating that alcoholic beverages containing 'hemp or a hemp component' cannot contain a psychoactive level of the controlled substance THC.

Ganjapreneurs and brewmeisters are historically risk-friendly, however, as evinced by Simple Brewing Company in New York City. Every weekend, founder J3P0* and his partner Emily brew in the backyard of their Brooklyn townhouse on a half-barrel brewing system. They produce many different ales and lagers, but their most popular is the Irie PA: a THC-infused beer.

The beer's name is a twist on India Pale Ale and the Jamaican English word irie, meaning 'nice, good, or pleasing.' A twelve ounce bottle is 6% alcohol by volume (ABV), and contains 25 milligrams of THC. J3P0 — who's been brewing beer for over ten years — first created the bud-filled brew beer in 2014 for a 420-themed reggae party, at the special request of a musician friend. J3P0 had been a regular cannabis consumer for years, and educated himself about cannabinoids and terpenes, but the opportunity inspired him to evolve his interest from enthusiast to entrepreneur. After that initial 420 experiment, Simple Brewing was inspired to create a line of true THC-infused beer, unlike the products made today by Lagunitas or Keith Villa.

J3P0 explained how the Irie PA is made. The brewing process takes several days, and starts with a base of several malts including pilsner, German, and toasted malts. These provide a sweet flavor profile which is balanced by the bitter hops. The grains are steeped, then the liquid is collected and boiled. The hops are added to the boil periodically. "When you're done boiling it, you cool it down to ferment it," J3P0 said in an in-person interview. The beer then ferments for five days. "We let it ferment just a little but then we move it to a different fermenting vessel — and this is where the shit gets good."

During the secondary fermentation, he adds an ounce of lupulin powder, a hop extract with fruity, citrusy flavors. He then adds half an ounce of decarboxylated Thin Mint cannabis flower, and 1000 milligrams of a California-made tincture, meaning a cannabis extract made with alcohol.

"The tincture is THC, not CBD," J3P0 said. "Because we want this beer to be, well, psycho-fucking-active. I'm all for medical marijuana but this [beer] is unabashedly recreational." The flower doesn't add much THC, but imparts a hempy, weedy flavor so people know what they're drinking. The beer ferments for an additional four days, and then is transferred to a keg and carbonated, completing the brew cycle.

It was a trial-and-error process, though, and it took J3P0 several attempts before he struck gold with the magic recipe. For example, he initially put in the cannabis flower as a hop addition during the boil, which made the first batch only mildly psychoactive. One of J3P0's friends reminded him that THC is fat-soluble but not water-soluble, and suggested he add a tincture in the final stages of fermentation. With this innovation, the Irie PA was born.

"I think this is totally unique," J3PO said. "Nothing like this is commercially available. You can buy beers with weed ingredients or non-alcoholic beers with THC — but never have the two met [so formally], and that's what we wanted to do. And I think we do this really fucking well and it's coming into its own."

J3P0 and his partner don't sell the Irie PA in stores or bars, but they host private tastings at their home. Friends who catch the invite can enjoy a sampling of their different beers with home-cooked food and good music. They suggest a donation of $15 per bottle or $50 for a four-pack.

Reactions to the Irie PA vary, depending on the consumer. "These are pretty strong," J3P0 said. "Smoking weed is one thing, but everyone reacts differently to edibles. So I've had people come back and say they didn't feel much, then other people will say they couldn't move for a day."

2018 marks the first year the Irie PA will be available outside of a 4/20 party, but Simple Brewing is keeping a low-profile with its green-friendly beer. "I market it by just telling people, word-of- mouth [style]," J3P0 explained. "It doesn't have much social media presence, and we don't overtly advertise it. It kind of sells itself — you give it to a friend and they tell a friend. We like this direction a lot — making ourselves less visible and doing it kinda underground. For us, I think being elusive is better than being available." The strategy works. A keg of this beer never returns empty, such is the appetite for the hoppy and flowery beverage.

J3P0 hopes to develop the recipe further, in order to create variations of the beer with different THC levels, so customers can choose their proper dosage. He even wants to put small pot leaves on his bottles to indicate potency — like chili peppers illustrating a dish's spiciness on a restaurant menu. But Simple Brewing Company has several hurdles to overcome before J3P0 is able to expand the brand into something more than a black market, DIY operation.

Among many challenges the clandestine brewer faces with the Irie PA, the most salient roadblock is, of course, the illegal status of cannabis in New York State. In the absence of a legal market, J3P0 has to either source his cannabis ingredients through the local underground — where cost is not always ideal — or import them from out-of-state.

J3P0 certainly puts himself and his indie brewery at risk by selling the product in a prohibitionist state — a point he acknowledges. "I have some trepidation on the legality of this drink," he said. "Even if cannabis was legal, the government might have a problem with a drink like ours. I could see this going the way of the original Four Loko."

Others agree and suggest how Simple Brewing Company can position itself to stay afloat. "J3P0 and Emily shouldn't strive for growth, but rather [focus on] maintaining and improving quality," said Oleg MaryAces, a cannabis entrepreneur and co-founder of local CBD concentrate brand Lock & Key Remedies. He recommends that Simple Brewing maintains its strategy of limited output, too. "Scaling too fast will expose them to risk. Now is the time, pre-legalization, to build their reputation… If these guys are willing to take the risk and work as carefully as possible while there's little competition, that will position them as the leaders in this niche."

Joseph A. Bondy, an attorney with a focus on cannabis, was less optimistic. "If these guys have aspirations of becoming legitimate brewers," he says, "they are jeopardizing themselves now with this underground activity. And if caught they will be prevented from making their product when it becomes legal."

Bondy also worries if associating the more benign cannabis with the more harmful alcohol will cause social problems, like fights or drunk driving. Plus, he feels dosage is an issue, and notes that there should be a conservative limit of alcohol or THC in the product, since the intoxicants will compound each others' effects when combined.

That said, Bondy does think the beer could be legal soon. "If cannabis is made lawful federally," Bondy said, "then by definition a beer fermented with a lawful additive, like an herb or a spice, could of course have cannabis as an ingredient." But with legalization comes another problem: larger companies that can produce a similar product in huge quantities at lower costs will force small-batch brewers like J3P0 out of the market.

J3P0 shrugs off this grim forecast. "We're part of a niche market," he said. "We're not trying to compete with the macro-brewers. We envision ourselves as a neighborhood, mom-and-pop brewery, so our market is our local community." And should a cannabis-infused beer become fully legal, he would be happy to sell it at a small scale and continue keeping it local.

But for now, J3P0 hopes to slowly grow a community of fans for his beer. He is looking forward to hosting friends and family under the hot New York sun this summer, where the Irie PA is sure to be a hitmaker. "Weed is a big part of our lives," he said. "A healthy portion of THC and CBD in your life makes for a happier, better, and more chill occasion. And we love beer. So why shouldn't the two meet?"

*Names have been changed to protect the anonymity of the subjects

Alexander Lekhtman writes about drug policy, activism, and culture. He's also a musician based in New York City hoping to change the world through the power of both ledger lines and legislation.