CULTURE
What Is Synthetic CBD and THC and Are They Different From Natural Cannabinoids?
AD
Spoiler alert: Real cannabis flower is better.
Published on March 12, 2020

Trying to understand the rationale behind some of the US government’s decisions in relation to cannabis can be devilishly frustrating. Of the wrong turns the decades-long series of misguided efforts to eradicate cannabis has taken, the development of synthetic forms of the plant is not necessarily the victory one might assume.

Instead, there are several valid reasons to question the effectiveness of drugs like Marinol, which relies on a synthetic form of THC. This is especially true when compared to the more favorable results that come from using the real cannabis plant. Regardless of this disparity, the federal prohibition of cannabis has forced many doctors to instead rely on prescribing synthetic, legal (and less effective) alternatives.

To understand why synthetic cannabis is inferior to its natural counterpart, let’s start by looking at the drug at the center of the dispute: Marinol. 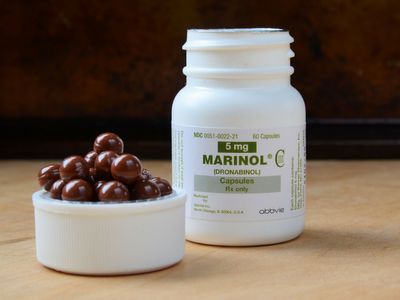 This pharmaceutical was first approved by the Food and Drug Administration (FDA) in 1985. At that time, it’s only approved use was to treat nausea and vomiting related to chemotherapy from cancer.  Over the years, it’s gone on to gain approval as a treatment for individuals suffering from weight loss as a result of anorexia or advanced HIV.

Marinol’s active ingredient is dronabinol, a synthetic form of THC. That means the plant is not involved in the manufacturing of this drug whatsoever, which is why pharmaceutical companies can, for the most part, freely manufacture, distribute, or sell it. Whereas the THC found in cannabis is a Schedule I substance considered as dangerous as heroin by the feds, dronabinol is only Schedule III. Other Schedule III drugs include codeine and ketamine.

As opposed to extracting cannabinoids from the plant, chemists are instead creating THC from scratch, which they argue is more stable than natural cannabinoids. Synthetic cannabinoid production shows no signs of slowing down, either.

How Is Marinol Different from Natural Cannabinoids?

As MERRY JANE has previously noted, the downsides associated with Marinol essentially boil down to two factors.

The first has to do with price. While medical marijuana patients are currently unable to utilize insurance to pay for cannabis, they aren’t saving much by using the stuff that’s coming from the pharmacy. Without insurance, a month’s worth of Marinol can cost over $600. Compare that to the cost of flower (Oakland’s Harborside dispensary currently sells half-ounces for $99) and it becomes increasingly difficult to understand the appeal behind this more expensive, less effective alternative to cannabis.

The other important factor is what consumers lose in terms of complementary cannabinoids. In a Frontiers of Neurology study published in 2018, researchers gave epilepsy patients either whole-plant cannabis CBD extracts or purified (or, isolated) CBD extracts. Though two-thirds of the patients studied reported an overall reduction in seizures, 71 percent of patients taking whole-plant extracts reported improvements. When compared to the 36 percent using isolated CBD extracts, researchers concluded that “CBD-rich extracts seem to present a better therapeutic profile than purified CBD.”

It’s now believed that the medicinal properties of cannabis are most effective when cannabinoids are consumed collectively. This is referred to as the “entourage effect” or “ensemble effect.” Essentially, the thousands of compounds (including cannabinoids, terpenoids, flavonoids, and more) in cannabis work better together than when consumed in isolation.

Given the fact Marinol relies on a synthetic form of THC, this means the drug contains no other cannabinoids. We thus call the form of THC that appears in Marinol an “isolated” cannabinoid because it doesn’t exist in concert with the other compounds it would naturally have around it. As we continue to learn more about the validity of the entourage effect, it's likely Marinol will become obsolete. 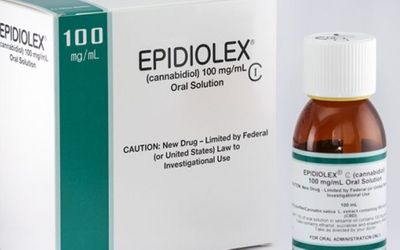 What About Synthetic CBD?

In 2014, the FDA approved the drug Epidiolex, which became the first cannabinoid drug to receive a “fast-tracking” designation from the agency. Doctors are currently allowed to prescribe the medication to patients over the age of two as a treatment for seizures related to two rare forms of epilepsy: Lennox-Gastaut syndrome and Dravet syndrome. Epidiolex, however, is not a synthetic product. Instead, it is derived from actual cannabis plants. 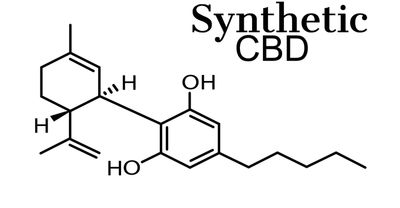 On the other hand, an announcement in 2018 from Zynerba Pharmaceuticals officially put synthetic CBD on the radar. The star of the show is Zygel, a drug that relies on a chemically identical CBD substitute called H2CBD (or 8,9-dihydrocannabidiol). Following this announcement, Zygel was also fast-tracked by the FDA. It is currently expected to be available by the end of 2020.

So, are synthetic cannabinoids more effective than natural ones? That depends on who you ask. If you're a member of the government, have a prohibitionist mindset, or are in the pharmaceutical industry, you might think so. But, if you've ever witnessed the miraculous benefits of natural, Earth-grown cannabis, you know that nothing compares to the healing power of the plant in its natural state.

CBD
THC
PROHIBITION
BIG PHARMA
MORE...
IN THIS STORY
CBD
Click to shop at our CBD store
Zack Ruskin
FOLLOW
Zack Ruskin is a cannabis and culture journalist living in San Francisco. Follow him on Twitter: @zackruskin.
Share this article with your friends!
AD
By using our site you agree to our use of cookies to deliver a better experience.
Accept
Decline
MORE FROM MERRY JANE