CULTURE
What Is “Strawberry Cough” Weed and Does the Strain Actually Taste Like Fruit?
AD
The Strawberry Cough cannabis strain has been immortalized in pop culture, and it almost became a Nike shoe, too. But does this variety of weed actually taste like some fresh-picked berries?
Published on May 13, 2020

Plenty of marijuana strains have names that indicate what a smoker is committing to once they take a puff. Amnesia Haze often induces a fugue that results in some trivial short-term memory loss. The strain formerly known as Gorilla Glue is stickier than bubblegum in the middle of the summer. And Wedding Cake kind of tastes like, well, a vanilla wedding cake.

But one of the first strains famous for matching its namesake with its nature is Strawberry Cough. And, as the name suggests, the real deal smells and tastes like wild strawberries.

Normally, this is the part where we briefly cover the strain’s known history. The problem with Strawberry Cough is that no one knows where it actually comes from. Its original breeder, place of origin, and even its genetics are mysteries.

According to stoner lore, legendary breeder Kyle Kushmann created it. But, he squashed that theory in a recent article. So, since there’s no way to track this strain’s chain of custody from the original mother to current-day sales, it’s possible that many of the buds being sold as “Strawberry Cough” aren’t actually what they claim to be. Regardless, if it’s labeled “Strawberry Cough,” it better remind you of that juicy, red eaterio fruit.

Strawberry Cough’s similarities to real strawberries cemented its place in stoner history with the sci-fi action-apocalypse film Children of Men. In the video clip above, Michael Caine’s character introduces the movie’s hero to his weed garden, extolling the delightful experience of coughing after taking a hit of Strawberry Cough.

“Taste it? Strawberries,” he exclaims with a chuckle. “This is Strawberry Cough!”

Nike also planned to incorporate Strawberry Cough into its line of Nike SB weed-themed sneakers. But the Strawberry Cough shoes got cashed faster than a one-hitter, due to the COVID-19 pandemic, since “coughing” now conjures images of people dying — instead of them blowing out a sweet cloud of berrified weed smoke. 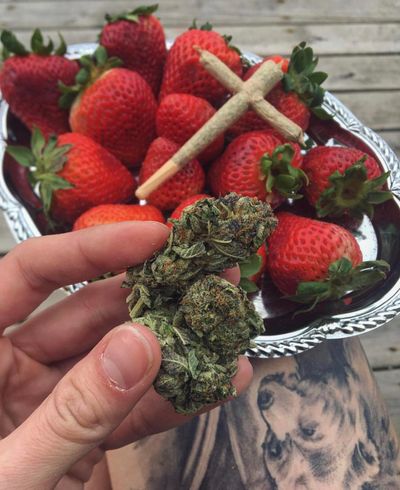 Smoker reports online confirm that Strawberry Cough both smells and tastes like strawberries. According to compiled lab data at Leafly, its THC levels typically hover around 17 percent, a modest amount that places this strain in the “average” potency category. Reports, generally, describe its buzz as mellow and uplifting, providing enough chill to unwind from a hectic day and enough energy to keep one from crashing out on the couch. But what makes Strawberry Cough isn’t the THC, it’s the terpenes.

Terpenes are molecules naturally produced by cannabis that give the plant its characteristic aromas and flavors. Terpenes may also affect the kinds of heady effects that consumers experience after getting lit. In Strawberry Cough’s case, its three most prominent terpenes are myrcene, pinene, and caryophyllene.

Myrcene, found in mangoes, lemon grass, and hops, contributes to weed’s earthy, fruity, and musky qualities, similar to cloves. Pinene, found in pine needles and some lime peels, smells of basil, rosemary, and, not surprisingly, pine. And caryophyllene brings the spicy scents found in black peppers.

Additionally, both Strawberry Cough and strawberry, the fruit, contain linalool, another terpene found in flowers such as lavender. The Strawberry Cough weed strain smells and tastes like strawberries because both plants produce the same aromatic chemical combinations that make up the essences of those earthly delights. So, the next time you want to give your tastebuds (and brain) a treat, get your hands on some Strawberry Cough — and enjoy!

STRAINS
HISTORY
MOVIES
CULTURE
MORE...
MERRY JANE Staff
FOLLOW
MERRY JANE is based in Los Angeles, California and is dedicated to elevating the discussion around cannabis culture.
Share this article with your friends!
AD
By using our site you agree to our use of cookies to deliver a better experience.
Accept
Decline
MORE FROM MERRY JANE