CULTURE
What Is Shatter and How Do You Hit It?
AD
It looks cool, it hits like a champ, and it’ll get you lifted faster than a rocket taking off from Cape Canaveral.
Published on August 12, 2019

Shatter is a relative newcomer to the legal weed scene. It looks like glass, hits like a champ, and feels delightful (or so I’m told). But what, exactly, is shatter? What makes it different from other waxes, hashes, or oils? And most importantly, what’s the best way to consume it?

How Shatter Is Made

Shatter is classified as an extract, so it’s made from cannabis’s extracted essential oils. Typically, this extraction is done with a hydrocarbon solvent such as butane, propane, or a mixture of the two. It can also be extracted with carbon dioxide, but not usually.

Once extracted with hydrocarbons, the raw oil undergoes some cleaning. The resultant bubbling sludge gets whipped, stirred, then placed in vacuum ovens, which gently heat the extraction while sucking out residual hydrocarbons and properly disposing of them.

Now that the extract has been cleaned of toxic solvents, it undergoes winterization. Winterization is a fancy name for “adding alcohol and filtering.” Basically, ethanol (usually in a relatively pure form like Everclear) gets poured into the extract. The contents are stirred or shaken then placed in a freezer. Cooling causes extraneous lipids and hydrocarbons (from the initial extraction) to coagulate, or clot. The mixture is run through a filter (kind of like coffee) to catch the lumpy, buttery crud and to separate the undesired elements from the ethanol mix.

Winterization is usually done three to five times to ensure the final product contains as little extraneous plant material as possible. Once the filtering steps are done, the ethanol is gently cooked off or evaporated from the mix, leaving behind delicious THC for your dabbing pleasure.

With shatter, the final product should be translucent, taking on the quality of amber-colored glass. At lower temperatures, this product can literally break apart into shards, hence the name shatter.

How Is Shatter Different From Other Extracts?

Shatter doesn’t offer anything special for the average toker. It comes in around the same potencies as other extracts or concentrates (70 to 90 percent THC). Where it usually differs is (1) cost and (2) ease of dabbing.

Imagine cannabis extracts existing on a spectrum that moves from containing the most plant components to containing the least plant components. On one end of this spectrum, you’ll find raw cannabis oil — the thick, black, sativa-saturated syrup called Rick Simpson oil, Phoenix Tears, or FECO (full-extract cannabis oil). Raw oil is essentially the plant in viscous form, so of all the different forms of cannabis extracts, it contains the most of everything: cannabinoids, terpenes, etc.

On the opposite end of the sectrum are isolates. Isolates are pure THC or CBD crystals/powders. They contain no terpenoids or other plant components.

Gallery — The Art of the Dab

Shatters sit right in the middle of the two extremes: raw oil and isolates. Shatters contain a lot of THC (some can reach as high as 90 percent), but they tend to lack other cannabinoids like CBD or CBG. (Though, to be fair, a few companies offer CBD shatters, if you’re into that.) Some craft shatters can retain some of their original terpene contents, but, typically, terpenes are lost during the winterization process and must be reintroduced to the final shatter product (for better or worse).

The main purpose of consuming shatter is to maximize THC ingestion while minimizing lipid ingestion. More on that below.

Also, shatters are usually cheaper than the more advanced extracts such as sauces and isolates. But they’re usually a little more expensive than budder waxes, since there are more steps involved in their manufacturing. 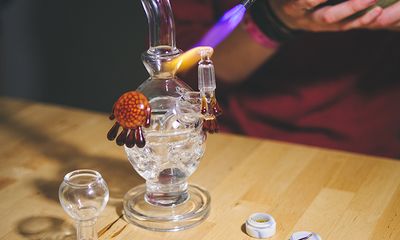 How Should I Consume Shatter?

Oh, let me count the ways.

Dabbing: The best way to get uh, ahem, a mind-shattering experience is to dab your shatter. Dabbing, if done correctly, will deliver the entire dabbed amount right into your lungs. It’s cost effective, it’s relatively simple, and it’ll get you fucked up. In fact, you could say shatters were designed for dabbing, since winterization removes the lipids that melt at much higher temperatures than the flavorful terpenes do. Dabbing should be done at the lowest possible temperature setting (if you’re a serious dab connoisseur, that is), and shatters leave behind little residue even when dabbed at the lowest settings.

Vape Pens: Many vape pen models today allow you to load your own shatter directly onto the coiled or ceramic heating element. Vape pens are basically minimalist, portable dab rigs (without the water filtration), and they’re ideal for staying discreet or toking on-the-go.

Smoking: If you’re not big on dabbing, or if you just prefer to puff it up old school, you can smoke shatter. Usually, this is done by rolling a small amount into a thin strip, like putty or dough, through a DIY process called “twaxing.” The strip can be placed atop your buds in a joint, blunt, or spliff. Or you can just drop some on top of bowl. Or if you’re a show-off, you can even wrap the strip around the outside of a blunt as heady decor. Warning: Smoking shatter produces intensely hot smoke, so keep a glass of water on-hand in the event of a coughing fit.

Edibles: Simply drop some shatter into a cooking oil or fat to dissolve it, and it’s ready to mix into your favorite infused dish. Other common extraction methods for edibles (such as heating butter with raw buds) makes it difficult to measure THC doses, and they’ll rarely be consistent between servings. Since shatter maintains a fairly consistent potency throughout the entire product, it’s easier to measure how much THC is going into your food with shatter than it is extracting THC from weed with cooking oils or butters.

420
EDUCATION
SMOKE
SHATTER
MORE...
IN THIS STORY
CBD
Click to shop at our CBD store
Randy Robinson
FOLLOW
Based in Denver, Randy studied cannabinoid science while getting a degree in molecular biology at the University of Colorado. When not writing about cannabis, science, politics, or LGBT issues, they can be found exploring nature somewhere in the Rocky Mountains. Catch Randy on Twitter and Instagram @randieseljay
Share this article with your friends!
AD
By using our site you agree to our use of cookies to deliver a better experience.
Accept
Decline
MORE FROM MERRY JANE