CULTURE
What Is Mescaline and What Does Tripping On This Psychedelic Drug Feel Like?
AD
Mescaline, which comes from the peyote cactus, boasts a long history of indigenous spiritual use. What is it, exactly, and how does the entheogen affect the brain?
Published on March 16, 2020

Pop culture ranging from Fear and Loathing in Las Vegas to The Matrix references a rare but natural psychedelic known as mescaline. What, exactly, is mescaline, where does it come from, and what does it do to someone who consumes it?

Mescaline, or what chemists call 3,4,5-trimethoxyphenethylamine, is an alkaloid that’s commonly found in the peyote cactus, though it’s also found in Peruvian torch, San Pedro, and other cacti, as well. Synthetic, or lab-made mescaline, is also available for research purposes.

If you’ve ever taken a trip out into the desert, and your tour guide advised you not to eat random local cacti if you got stuck in a survival situation, this is why: You might end up tripping balls or poisoning yourself for hours on end, under the hot sun while dehydrated, and that’s no good when you need your wits to stay alive.

But, if you aren’t stranded out in the middle of Death Valley, what will mescaline do to you? What are the psychedelic plant’s benefits, and what are its risks, if any? 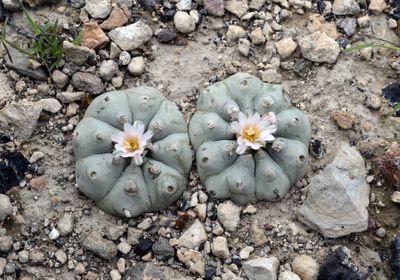 How Do People Consume Mescaline?

For thousands of years, indigenous people native to the Americas consumed peyote during spiritual ceremonies. To cultivate mescaline, the cactus’s buttons — which grow atop the cactus’s roots — are harvested. Once the buttons dry, they can be powdered to make mescaline capsules or brewed into a tea.

The typical introductory dose of peyote starts at around 10 to 20 grams of dried buttons, which should contain less than 100mg of mescaline. After consumption, mescaline takes about 1 to 3 hours to kick in, with residual effects lingering for roughly another 10 to 12 hours. Of course, trip duration and intensity is dose dependent.

And just for the record, it is illegal to cultivate or harvest peyote buttons in the US unless you belong to an indigenous tribe and are consuming them strictly for religious purposes. Even collecting peyote buttons in the wild is a felony, so leave that to the people who currently reserve the rights to the plant. Additionally, peyote takes forever to grow. Its unusually long growth period and high demand by unethical psychonauts has pushed the cactus onto the endangered species list. 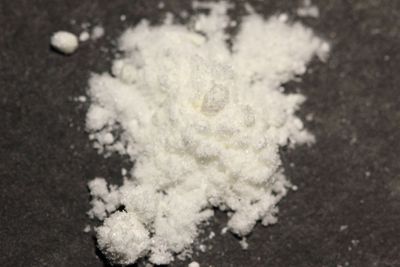 Above, mescaline in powdered form

When tripping on mescaline, visual hallucinations may include distorted shapes, geometric patterning, or fluctuating colors. Synesthesia, where senses fuse and merge, may also occur. Feelings of being disconnected from reality, deeply connected to the universe, or floating through a dream-like state are also common. Previously forgotten memories may resurface, and painful memories may be resolved. Unlike LSD or psilocybin, mescaline is not as widely known for typically triggering “bad” or “challenging” trips.

Are There Any Potential Benefits to Tripping on Mescaline?

Outside of religious use in indigenous ceremonies, mescaline (and peyote) are considered Schedule I drugs by federal law. In other words, the US government believes mescaline is an incredibly dangerous and addictive drug with “no accepted medical use.” (By the way, the feds consider marijuana a Schedule I drug right now, too.)

However, some recent studies show that mescaline could provide therapeutic benefits for some patients. Medicinal peyote is nothing new. Indigenous people have administered the plant for centuries to treat a variety of conditions such as arthritis, tooth pain, and even pain from childbirth (note that, with the last one, there’s evidence that peyote could cause birth defects).

One of peyote’s most promising benefits could be alleviating or even breaking two diseases that are ravaging indigenous communities in the US, Mexico, and South America: alcoholism and drug addiction. According to Dr. John Halpern, a Harvard Medical School psychiatrist, mescaline derived from peyote can curb drug and alcohol cravings for up to two months after consuming the cactus compound, with no additional risks for craving mescaline, which is non-addictive. 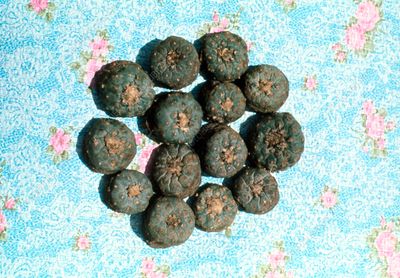 What Are the Risks of Tripping on Mescaline?

Mescaline, like most hallucinogens, carries some risks. The most common side effect is nausea and vomiting. People with mental disorders such as schizophrenia, manic-depression, or other conditions that can cause psychosis may want to avoid mescaline or peyote, too.

While tripping on mescaline, psychonauts and ceremonial participants should ensure they’ve got some friends nearby to monitor them. “Babysitters” of this sort should, ideally, be sober at the time, so anyone undergoing the psychedelic experience can receive proper, grounded guidance during the trip.

Overall, check your local laws before even thinking about trying peyote or mescaline. And most importantly, don’t go picking wild peyote buttons unless you (1) belong to a tribe and (2) know precisely what you’re doing. The only thing more tragic than going to prison for self-medicating would be driving this valuable, sacred plant into extinction.

HISTORY
PSYCHEDELICS
INFORMATIVE
INDIGENOUS COMMUNITIES
MORE...
Randy Robinson
FOLLOW
Based in Denver, Randy studied cannabinoid science while getting a degree in molecular biology at the University of Colorado. When not writing about cannabis, science, politics, or LGBT issues, they can be found exploring nature somewhere in the Rocky Mountains. Catch Randy on Twitter and Instagram @randieseljay
Share this article with your friends!
AD
By using our site you agree to our use of cookies to deliver a better experience.
Accept
Decline
MORE FROM MERRY JANE