CULTURE
What Is “Kosher Kush” and What Makes It a Weed Strain of Biblical Proportions?
AD
An inside look at Kosher Kush, the indica-dominant weed strain with otherworldly effects and religious roots that will make you even more of a true believer — in the divine power of cannabis!
Published on June 16, 2020

With a name steeped in biblical history and ancient Jewish dietary laws, Kosher Kush may seem like specialty cannabis just for devotees of Kabbalah and the Talmud. Don’t worry, though, the Kosher Kush faith is open to all who seek or, in this case, smoke it.

Like kosher food favorites such as bagels, brisket, and pickles plucked from big barrels of brine, Kosher Kush is a treat available to everyone. Also, like matza, the strain is highly likely to make you a convert to its divine sensations.

Kosher Kush has won multiple Cannabis Cup trophies and continues to convert tokers into true believers all over God’s green earth. So here are some Kosher Kush questions to which the rabbinical reefer team at MERRY JANE is blessed to be able to provide with answers. 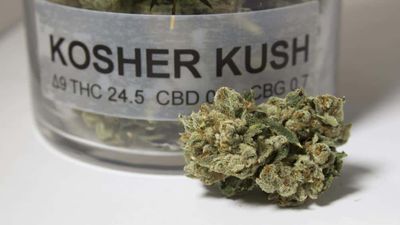 Why Is the Strain Called Kosher Kush?

On the one hand, we could say Kosher Kush came by its moniker by being the first commercial cannabis strain on record to actually be blessed by a rabbi.

However, before any clergy member officially anointed the present incarnation of Kosher Kush, the indica-dominant strain of unknown lineage originally developed a following in the Los Angeles area under the moniker “Jew Gold.” Given the inherent harshness of such a nickname, let’s thank the Green Goddess that the cultivators at Reserva Privada (itself a sub-division of DNA Genetics) subsequently rebranded it as Kosher Kush. 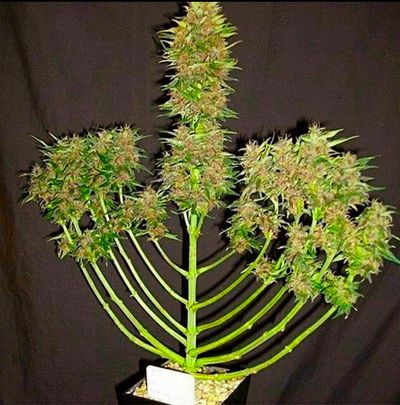 So Is Kosher Kush Actually Kosher?

The rabbi’s blessing adds a bit of dope divinity to Kosher Kush, but that alone does not make the weed properly kosher.

As a religious term, “kosher” refers to foods prepared using explicit biblical guidelines. In casual conversation, though, “kosher” has come to mean anything good, pure, righteous. So in the latter sense, Kosher Kush more than ably earns its moniker.

That stated, Judaism’s ritual connections to marijuana date back thousands of years. According to biblical scholars, the Hebrew word “kaneh bosm” — considered to mean “cannabis”—appears five times in the original text of the Old Testament.

Check out these two potent examples of pot’s presence in the Good Book: Exodus 30: 23-15 contains a cannabis oil recipe used by Moses and, in Isaiah 43:24, God himself rages, “You have not bought any fragrant calamus [cannabis] for me, or lavished on me the fat of your sacrifices!”

In the context of physical history, Israeli archaeologists recently unearthed evidence of burnt ritual cannabis in the ruins of a 2,700-year-old Jewish temple. Their report concluded, “It seems feasible to suggest that the use of cannabis on the Arad altar had a deliberate psychoactive role.”

Another tie to kosher foods is that Kosher Kush is revered for its taste — an earthy, lip-smacking combination of pine, citrus, and spices. Oy, that’s delicious!

What Are the Effects of Kosher Kush and Will I See God?

While no one can specify who (or what) you might encounter after firing up a bowl of Kosher Kush, we can proclaim forthrightly that this hugely indica-heavy strain packs a godly wallop. On the low end, it’s known to clock in at 20 percent THC, with some tests and reviewers placing the THC content at even higher levels (and the key word there is “higher”).

Kosher Kush hits hard with a potentially overwhelming impact of total mind and body relaxation. As such, it’s recommended to be used at night, or at least at a proper time and in a mellow setting where “couch-lock” is a definite and desirable possible outcome.

“Miracles” are not ours to call. Medical marijuana resources, however, report that Kosher Kush has proven remarkably effective in addressing issues of anxiety, stress, strain, and, perhaps above all, insomnia. Numerous users also report that Kosher Kush resulted in them enjoying a great stretch of peaceful sleep after imbibing. 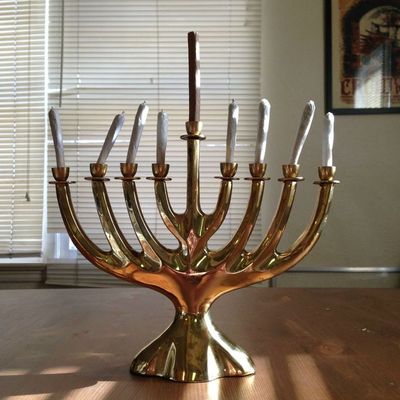 Is Kosher Kush Related to Any Other Strains?

Indeed, Kosher Kush has adhered to the biblical direction to be fruitful and multiply. Kosher Kush has gone on to generate hybrids that include Family Jewels, Miss USA, and Nicole Kush. Now do yourself a marijuana mitzvah and get your hands on this holy herb the next time you visit a dispensary.

RELIGION
STRAINS
HISTORY
FLOWER
MORE...
Mike McPadden
FOLLOW
Mike McPadden is the author of "Heavy Metal Movies" and the upcoming "Last American Virgins." He writes about movies, music, and crime in Chicago. Twitter @mcbeardo
Share this article with your friends!
AD
By using our site you agree to our use of cookies to deliver a better experience.
Accept
Decline
MORE FROM MERRY JANE