CULTURE
What Is Kief and What's the Best Way to Collect It From Your Weed?
AD
Sometimes scraping that delicious, potent kief can be a chore, but MERRY JANE’s got your back with some ideas for making the process a little less time-consuming.
Published on June 4, 2019

Lush buds of dank flower are great and all, but who here hasn’t hit a bowl of pure kief at least once?

Kief, sometimes spelled “keef,” is the name for the glandular resin sacs produced by cannabis flower, otherwise known as trichomes. If you’re still scratching your head, it’s all the crystally, dusty, sticky stuff that builds up in the bottom of your weed containers and grinders.

Kief contains more cannabinoids, like THC or CBD, and terpenes, like limonene or myrcene, than any other part of the plant, which is why its one of the major ingredients for crafting quality pressed hashish or dabbable extracts. Some dispensaries sell small bags or bottles of kief, too.

Kief can be consumed several ways, as well. It can top-off a bowl, get twisted up into a joint, or smoked all by its lonesome, no buds needed. Vaporizing kief draws in most of the good stuff while leaving behind just a smidge of ashy residue. But to get enough kief to catch a buzz can be a bit of a challenge, which is why MERRY JANE’s got your back with some ideas for making your adventures in kief-scraping a little less time-consuming — and frustrating. 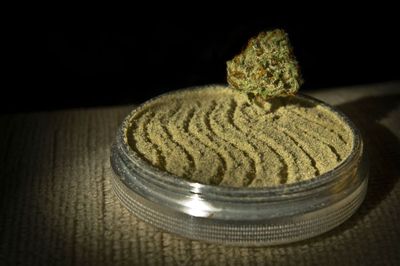 First off, if you don’t have a multi-compartment weed grinder with a kief-catch, get one. These grinders come equipped with a metallic screen and a detachable bottom compartment (called a “kief tray”) where the ground-up weed drops all the kief dislodged during the grinding process.

Not much kief will drop from a single bud, so it may require several rounds of grinding flower before you get enough kief to actually smoke. 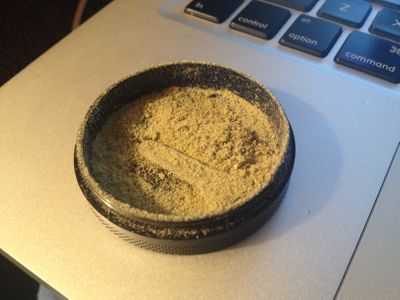 While regular and consistent grinder use will eventually separate enough kief to puff on, there are a couple of tricks to maximize kief collection. The first is to simply shake the grinder left-to-right after grinding, but before removing the ground-up buds. (Shaking up-and-down jostles the kief up into and back down through the buds, so it’s not the most efficient method.)

The second is to shake the grinder with the addition of a “grinder coin.” Just add a coin, like a penny or a quarter, to the same grinder compartment where you’ll find the kief screen. The coin further agitates the shaking process, knocking off a few more pieces of kief than you would without it.

If you’re really trying to get the most bang for your buck when it comes to consuming kief, go with cheesecloth or silk screens instead. Rubbing buds over these screens works just like a grinder, except finer cloths/screens will sift out larger, extraneous plant particles. This screening process is what traditional hashish makers use to make hash. 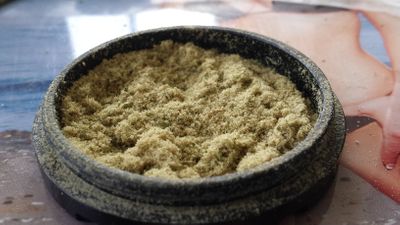 Okay, great. You’ve got a wafer of pure kief chillin’ on the bottom of your grinder. What now? How do you get it all out?

Cannabis trichomes are notoriously fragile. Just pressing on the kief can make the resinous sacs explode, leaving behind a glue-like smear across the bottom of your kief-catcher. Thankfully, many grinders come with a tiny plastic spatula designed for transferring the kief from your grinder to your pipe.

If you didn’t get a spatula with your grinder, spoons marketed for babies work just as well. If a razor blade can fit in the kief-catcher, that can also work wonders for scraping kief. If a razor blade is a tad too Scarface for you, try a small paint brush or even a screw or toothpick instead. 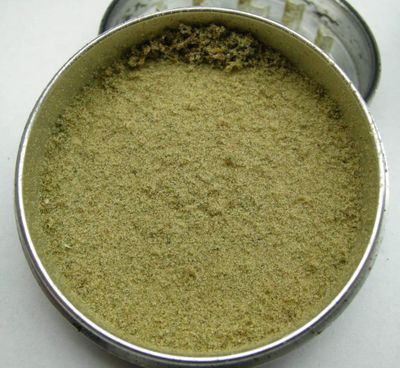 Sometimes scraping that delicious kief can be a chore, especially if you’re doing it in a heated environment. Because kief is basically tiny sacs of oil, heat can make them melt, including the heat generated by the friction caused from scraping.

To avoid a gooey mess, try refrigerating the kief first, such as by placing the grinder in a freezer for a few minutes. You could let it sit in there long enough to freeze, but freezing kief isn’t necessary.

Keep in mind that the tools you use to scrape kief could also transfer heat, so placing those in a refrigerator beforehand can help, too.

Basically, you just need three steps to get kief: agitation to knock the kief off the buds, separation to sift the kief from the buds, and then scraping to transfer the kief into a smoking or vaping device. Kief serves as an excellent way to consume cannabis while minimizing the toxic free-radical production from plant material that happens when burning it.

However, just because there’s less plant matter being combusted doesn’t mean you won’t cough up a lung, so keep some cold water handy in the event you inhale more than you can blaze, so to speak.

420
HOW TO
POTENCY
CULTURE
MORE...
IN THIS STORY
CBD
Click to shop at our CBD store
Randy Robinson
FOLLOW
Based in Denver, Randy studied cannabinoid science while getting a degree in molecular biology at the University of Colorado. When not writing about cannabis, science, politics, or LGBT issues, they can be found exploring nature somewhere in the Rocky Mountains. Catch Randy on Twitter and Instagram @randieseljay
Share this article with your friends!
AD
By using our site you agree to our use of cookies to deliver a better experience.
Accept
Decline
MORE FROM MERRY JANE