CULTURE
What Is Ice Wax and How Do You Make It?
AD
Never heard of ice wax? We beg to differ. Here's the scoop on this luscious concentrate, and how to make it at home.
Published on February 11, 2020

If you’ve visited a cannabis dispensary any time in the last several years, you’ve probably noticed that marijuana flower is sharing shelf space with an increasing number of concentrates. The selection can be overwhelming for some, with dozens of products to choose from: rosin, shatter, oil, budder, sauce, and myriad others waiting to be dabbed or vaped. Another cannabis concentrate that is growing in popularity is ice wax, which is also known by several other names including water hash, bubble hash, and ice water hash. But what exactly is ice wax, and how is it made?

Ice wax is made from the glandular trichomes of cannabis that have been separated from the plant material by agitation in ice water. These potent weed crystals are then collected through a sieving process. Since ice wax can be made with a small investment in materials, and without the use of volatile solvents such as ethanol or hydrocarbons (like butane and propane), it is popular with many home gardeners. Properly made, ice wax can be a potent concentrate that is both high in THC and rich in flavorful terpenes. With the application of heat, high-quality ice wax will bubble and melt instead of burning, a characteristic responsible for the nicknames full melt (because of what it looks like) and bubble hash. 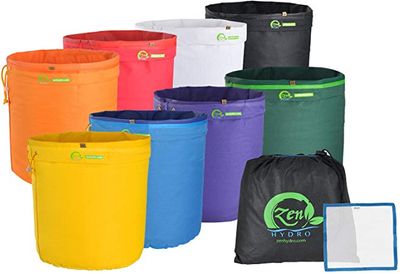 To make your own ice wax at home, you’ll need to acquire a few inexpensive supplies from a local grow shop or online retailer. First, you’ll need a set of sieving bags, commonly sold as bubble bags under several brand names. Bubble bags are available in 1- and 5-gallon sizes, or even bigger for large-scale operations. They’re available in sets of three, four, five, or even more bags, each having a differently sized filter screen (measured in microns, or one-millionth of a meter). More bags allow you to separate the ice hash into different grades based on trichome size.

You’ll also need several towels and a 25-micron screen for drying the ice wax, and a couple of dull butter knives for collecting it from the screens. And don’t forget to pick up three clean plastic buckets the same size as your bubble bags. You’ll also need plenty of ice, a hose with a spray nozzle, and a large wooden spoon or length of doweling for stirring.

Of course, cannabis is also required for this process. It doesn’t matter if you use fresh-frozen flowers or dried and cured buds. You can use top-quality flowers if that’s all you can get, but sugar leaf trim and larfy popcorn buds can make great ice hash, too, giving the grower a productive option for their less-than-primo weed.

Regardless, the herb you use should be glistening with trichomes — if you don’t see any with the naked eye, it’s probably not worth your time and effort to process into ice wax. The quality of the bubble hash you make depends on the quality of the cannabis you use. Mediocre weed will produce ice wax of the same ilk. You’ll want up to about 200 grams or so for 5-gallon bags and less than 50 grams for the 1-gallon size. 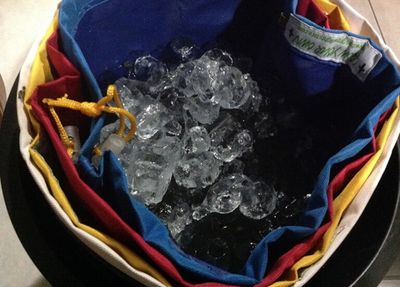 How to Make Ice Wax: Washing the Hash

Set up your bubble bags by placing them in one of the buckets, starting with the bag that has the smallest micron size and working your way up to the largest, one bag inside the next. Alternate the layers of ice and cannabis until the bucket is almost full, and then top off with cool water.

Allow the ice, water, and cannabis to sit for at least five minutes to give the trichomes a chance to get cold and brittle. Then, begin agitating the mixture by stirring. As you agitate, the trichome heads will break away from the plant material and become suspended in the water. The more you stir, the more you’ll break up the plant matter. Many ice wax makers will start with an agitation time of only a minute or two to produce an initial wash of the highest quality ice wax.

After agitation, pull the first bag with the plant material and ice out of the rest, allowing the water to flow through the filter screen and back into the bucket and remaining bags. Set the first bag aside in a separate bucket to be washed again, if desired. One at a time, pull the bubble bags out of the bucket, allowing the water to flow back into the container. Once the water has drained away, a layer of golden-hued trichomes will remain on the filter screen. Rinse the trichomes with the hose for a couple of minutes to wash away any impurities. 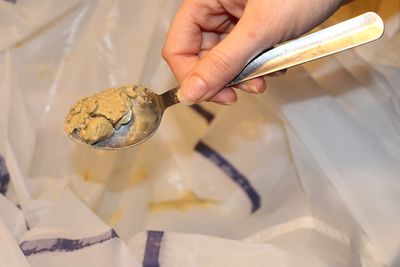 How to Make Ice Hash: Collect and Dry the Trichomes

Use a butter knife to gently scrape the mass of trichomes away from the screen and transfer them to the 25-micron screen placed atop an absorbent towel. Keep in a clean, well-ventilated place until completely dry. The ice wax can be enjoyed as is or grated with a Microplane to produce a crumbly bubble hash that resembles light-brown sugar. Store in an airtight container in a cool place. Enjoy with a hash pipe or dab rig, or use the ice wax as a topper for the weed in a bowl or joint for extra-potent hits.

If you grow pot and are looking for a way to use your trim and small buds, try making ice wax. You just might find that you prefer the intense high and complex flavors even more than your best flower.

420
HOW TO
CULTURE
DABS
MORE...
A.J. Herrington
FOLLOW
A.J. Herrington is a freelance writer focusing on cannabis news, business, and culture and has written for publications including High Times, Sensi, and HEMP. When he's not banging away at the keyboard, you'll probably find him tending to his plants in the garden.
Share this article with your friends!
AD
By using our site you agree to our use of cookies to deliver a better experience.
Accept
Decline
MORE FROM MERRY JANE