CULTURE
What Is Humulene and What Are the Benefits of This Cannabis Terpene?
AD
What do weed and beer have in common? Humulene, a terpene with rich, aromatic flavor and medicinal properties.
Published on April 17, 2020

Hops and weed are so closely related to one another, they’re basically cousins. Both plants belong to the Cannabacae family, and both share some biochemistry in common. One of the compounds found in both weed and hops is humulene, a terpenoid molecule known for its earthy, spicy qualities. 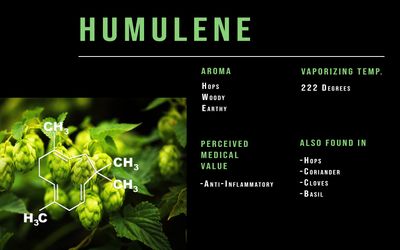 What Can Humulene Do, Exactly?

Humulene is one part of cannabis that scientists have studied for quite some time (unlike, say, THC, which comes with a lot of restrictions for researchers). Humulene’s most notable property is its ability to fight cancer and kill tumor cells, though it also possesses anti-inflammatory effects and can act as a natural pesticide and antibiotic, too.

Humulene’s anticancer powers may partially explain why whole-plant cannabis extracts are more effective at killing tumor cells than THC or CBD alone. Studies show that humulene can slow the growth of or even destroy cancer cells that start in the liver, the colon, the skin, the prostate, the lungs, and the breasts.

On top of all that medicinal bad-assery, humulene can work as a natural product to fight against bacterial infections. And it’s not just microscopic bugs that hate the terpene. Many insects also can’t stand it, meaning it can serve as a natural pesticide, as well. In fact, humulene’s antibacterial and anti-pest powers may explain why so many different kinds of plants evolved to produce it.

If you want to pump up your humulene intake, there are some weed strains known to produce more amounts of this terpene over others. Keep in mind that a plant’s genetics only partially contribute to any terpene’s content. The plant’s grow conditions, feed type, and feeding schedules also play a big role.

Since new hybrid strains hit the legal weed markets every few months, check the labels on your bud containers. Many labels feature the lab test data for that batch, and may list the terpenoid contents, as well. Just look for “humulene” and see if it’s listed at greater than 0.0 percent.

If your pot shop doesn’t include terpene contents on the labels, you can also train your nose to sniff out humulene. The terpene usually presents as an earthy, woody, slightly spicy aroma with subtle hints of citrus for especially sensitive schnozzes. Basically, humulene smells a bit like many well-crafted, microbrewed beers. 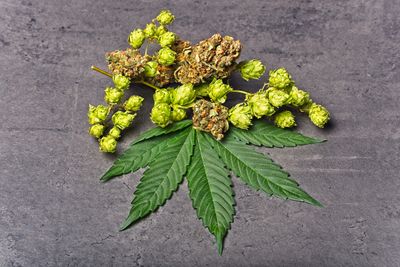 What Other Plants Produce Humulene?

Basically, you can get your daily dose of humulene from good weed. But you can also get humulene from simply maintaining a balanced diet with a variety of herbs, fruits, vegetables, and natural spices, too.

So, toke up, stay heady, and keep healthy!

AGRICULTURE
HISTORY
CULTURE
CANNABINOIDS
MORE...
IN THIS STORY
CBD
Click to shop at our CBD store
Randy Robinson
FOLLOW
Based in Denver, Randy studied cannabinoid science while getting a degree in molecular biology at the University of Colorado. When not writing about cannabis, science, politics, or LGBT issues, they can be found exploring nature somewhere in the Rocky Mountains. Catch Randy on Twitter and Instagram @randieseljay
Share this article with your friends!
AD
By using our site you agree to our use of cookies to deliver a better experience.
Accept
Decline
MORE FROM MERRY JANE