CULTURE
What Is “Blueberry” Weed and Do All “Blue” Strains Descend From This Legend?
AD
The cannabis strain Blueberry forever changed the weed game by introducing fruity aromas, juicy berry notes, and deep, richly colored hues to a legion of new plants that bear its name — and genetics.
Published on May 20, 2020

But among each of the names listed above — which is just a fraction of the “Blues” out there — there’s one consistent factor: Every one of ‘em likely spawned from a cross of the legendary Blueberry strain and some other plant. 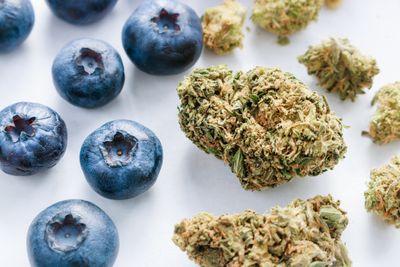 A Brief History of Blueberry, the Strain

Blueberry’s history, like all legends, took on a life of its own over the decades. As it goes, some time at the end of ‘70s, famed weed breeder DJ Short returned from Asia with a plant that looked, smelled, tasted, and smoked like nothing the West had ever seen or blazed before. It’s purported genetic lineage, too, has been hazier than a college dorm bathroom with a wet towel shoved under the door. Some sources say Blueberry came from a cross of Purple Thai with a Thai landrace, while others claim it’s a three-way cross that includes an Afghani landrace, as well.

But in 2017, Willamette Week put the bedtime stories to rest. In an interview with JD Short, the son of DJ Short, the world learned that Blueberry is actually the product of four different cannabis chemovars.

"It's Thai, Chocolate Thai, Afghan, and Oaxacan," JD told Willamette Week. "Those were the four strains DJ started with. All his strains started with those genetics."

"When it first came out, what set his stuff aside was that he had stabilized the color purple, with berry and fruit," JD continued. "A lot of the herb that was around at that point was spice weed, or it was the Afghan, which was skunk. DJ came along with these things that were berry and purple, and it just blew people's minds."

Both DJ and JD are still breeding primo weed — DJ Short being based in California at Old World Genetics, and his son in Eugene, Oregon at the aptly named Second Generation Genetics. And they still offer Blueberry’s genetics to cannabis companies across the West Coast. 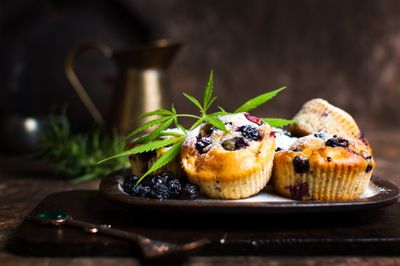 What Makes Blueberry So Damn Blue… and Berry?

Blueberry weed gets its blue and violet hues from anthocyanins, pigment molecules that only become visible where there’s no green chlorophyll on the buds or leaves. But anthocyanins, as far as we know, don’t do anything for the strain’s heady effects or its aromatic qualities. (Anthocyanins, however, may confer some health benefits.)

What set Blueberry apart from all of the skunk weed in the ‘80s was its unique terpene profile. Cannabis naturally produces terpenes for protection against the environment, but these molecules also generate the lush scents and unforgettable flavors that accompany Blueberry.

According to lab data at Leafly, Blueberry’s three most common terpenes are myrcene, caryophyllene, and pinene. The combination of myrcene and pinene’s herbal, floral essences with caryophyllene’s rabbit-punch to the senses would explain why Blueberry blew everyone away who first encountered it nearly half a century ago.

Does Every Strain with “Blue” in It Likely Come From Blueberry?

Short answer: In nearly every case, yes. Longer answer: If Blueberry wasn’t the strain’s parent, it was likely its grandparent.

Seriously, look on any weed strain database and just start scrolling through all the strains with “Blue” in their name. Within two generations of that plant’s lineage, you’ll more than likely find Blueberry somewhere in there. That’s just how powerful, ubiquitous, and stable Blueberry’s genetics have proven, despite 40 years of its existence.

And the name game also stands as a testament to the strain’s popularity: Blueberry is now so synonymous with “Blue” that it’s possibly been forever cemented into the weed community’s language, branding, and imagination.

STRAINS
HISTORY
FLOWER STRAINS
INFORMATIVE
MORE...
Randy Robinson
FOLLOW
Based in Denver, Randy studied cannabinoid science while getting a degree in molecular biology at the University of Colorado. When not writing about cannabis, science, politics, or LGBT issues, they can be found exploring nature somewhere in the Rocky Mountains. Catch Randy on Twitter and Instagram @randieseljay
Share this article with your friends!
AD
By using our site you agree to our use of cookies to deliver a better experience.
Accept
Decline
MORE FROM MERRY JANE