CULTURE
What Is an E-Nail and Will It Help You Get High as Shit?
AD
Dabbing with a torch is so 2012. Ditch the pyrotechnics and upgrade to an e-nail already.
Published on August 14, 2019

You’re at a party, and you and your friends are about to get lit. Someone whips out the weed extracts, the dab rig ascends from its immaculate stash box, and, seemingly out of nowhere, your host produces a giant canister of propane to get things cracking.

That propane might make the rookies nervous, though. Blow torches have that effect on some people.

Thankfully, tokers are a crafty bunch, and the engineers among us have already figured out ways to ditch the torch when dabbing. Besides reducing the chances of a fire hazard, torchless dabs offer some benefits you won’t find with a primitive, non-electrified nail. 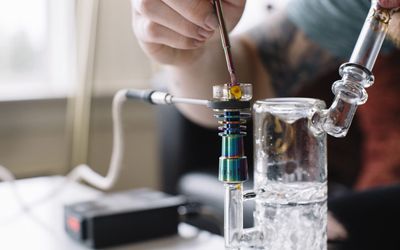 E-nail, short for electronic nail, lets cannabis consumers enjoy their dabs without waving around a whooshing display of industrial pyrotechnics. E-nails are usually made from titanium alloy, ceramic, or quartz, but their electronic components also allow you to control the temperature. Plus, the whole process of passing your buddy a dab rig is infinitely easier.

Since e-nails don’t require torches, they take a lot of guesswork out of the heating process. On a traditional dab rig, the upper rim of the nail is heated with the torch’s flame, especially with ceramic nails, which can crack or shatter if they become too hot or are unevenly heated on a regular basis. E-nails evenly distribute the heat throughout the nail, which can preserve the nail in the long run.

As noted earlier, most e-nails come with temperature controls. Depending on the product, dabbers can either dial in a specific temperature (for savoring those delicious terpenes or maximizing the effects of certain cannabinoids) or choose a generalized temperature setting (e.g. low, medium, high).

Also, sharing weed among friends and fam is a custom in the cannabis community. By switching to an e-nail, passing a rig around becomes much easier. The risk of your stoned-ass buddy dropping your gear and shattering that new glass is no longer a threat.

Some e-nails will maintain their temperatures until dialed down or turned off, meaning you can just leave that sucker on during the sesh, and it’s ready for a dab any time someone wants one. No need to sit around for 10 minutes while the nail gets hot. (Admittedly, metallic nails are much better suited for leaving on this way; ceramic nails are inherently fragile and should be allowed to heat up slowly and cool down just as slow.)

How to Care for an E-Nail

E-nails contain electronic components, so they require additional maintenance compared to regular ol’ nails. However, many of the same hygiene practices for blow-torch dabs apply to e-nails, too.

First, ensure the e-nail stays dry at all times. Some have anti-moisture measures built in (seals, etc.), but some don’t. And if you’re taking dabs off a decent rig, you’ve likely got a water filter or water-filled bubble base. Just make sure you always inhale when dabbing; accidentally coughing, sneezing, or laughing into the rig’s mouthpiece could shoot water right up into the e-nail.

Second, clean your damn nail after every damn dab. While dabbing at extremely high temps will vaporize every last drop of concentrate from the nail, dabbing at lower temps — which many cannabis connoisseurs prefer — leaves behind a residue. As that residue pools and stews on a hot nail, the molecules in it begin to break down into degradation products. Some of these degradation products are toxic.

We still don’t understand all the risks related to dabbing ultra-potent weed extracts (if there are any), but it’s safe to assume whatever breaks down in the residue aren’t the cannabinoids and terpenes we know and love, but are instead inferior chemical imposters that may compromise some people’s health.

To clean an e-nail, simply wipe a cotton swab along its business end while it’s still warm. The residue should come right off. If the nail has already cooled and the residue has congealed or solidified, you can warm the nail up again to clean it, or apply a small amount of cleaning solvent (like rubbing alcohol) to get rid of the icky stuff. Just double check that you cleaned off the solvent afterward, too. 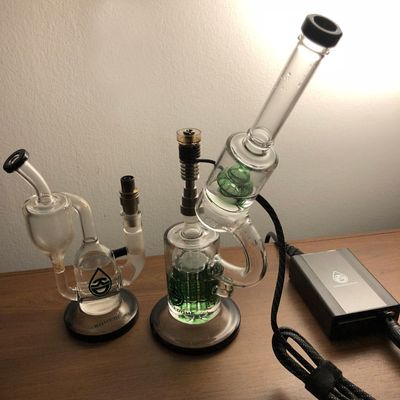 Where to Get an E-Nail

Alright, did I convince you to update your dab apparatus with some high-tech gadgetry? You’re probably wondering, then, where you can get your hands on one of these e-nails.

E-nails come in two “flavors,” if you will: either as standalone nails that can drop into any glass rig, or built-into the rig itself. For the latter, a product like Puffco’s The Peak offers portability, a rechargeable battery, and a built-in ceramic e-nail with qualitative temperature controls (low, medium, high, way high).

For standalone e-nails, check out your local dispensaries or headshop. If you’re gonna go all-out, might as well drop a benjamin or two on a high-end e-nail like the CloudV Electro Mini, 710 Life, Bee Nail, or Dr. Dabber’s Boost.  And since e-nails aren’t regulated or restricted (in most places), you can order them online from sites like Grasscity or Vaporizer Chief. Or you can skip the middleman and go straight to the Chinese wholesalers at DHGate.

So, what are you waiting for? Step up that dab game and put the final e-nail in that torch’s coffin!

CONCENTRATES
INFORMATIVE
SEO
SHATTER
MORE...
MERRY JANE Staff
FOLLOW
MERRY JANE is based in Los Angeles, California and is dedicated to elevating the discussion around cannabis culture.
Share this article with your friends!
AD
By using our site you agree to our use of cookies to deliver a better experience.
Accept
Decline
MORE FROM MERRY JANE