CULTURE
What Is “AK-47” Weed and What Makes the Legendary Strain Absolute Fire?
AD
Over the past few decades, AK-47 has been one of the go-to pot strains for potency and breeding. But are the marijuana variety's effects as menacing as its name suggests?
Published on May 11, 2020

If you’ve been to a pot shop that carries classic cannabis strains, you’ve likely seen a jar labeled “AK-47” sitting alongside the likes of other legendary buds such as Blueberry, Bubba Kush, White Widow, Chem Dog, and Northern Lights. And while the weed scene is known for, ahem, colorful strain names, why did an assault rifle inspire this particular plant’s moniker? 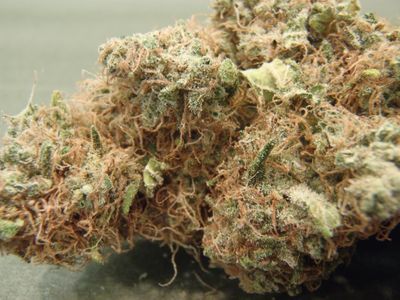 The original AK-47 — as in the gun, not the ganja — is a rifle designed by Russian engineers back when the US was helping the world recover from WWII and ramping up nuclear tensions with the USSR. As one of the most steadfast products of the Cold Wars’ arms race, the AK-47 became popular with communist armies and militias from Asia all the way to Latin America. It’s initials stand for “Avtomat Kalashnikova,” with “avtomat” meaning “automatic” and “Kalashnikova” referring to the (in)famous Russian Lieutenant-General who invented the gun, Mikhail Kalashnikov. The “47” refers to the year the gun’s design was completed, in 1947.

US troops who fought in Vietnam, Iraq, and Afghanistan faced off against combatants who were armed with AK-47s. Ironically, AK-47 weed is helping some American veterans deal with the PTSD brought on by combat. Today, the AK-47 is still in worldwide production. American, European, Asian, and Russian arms manufacturers all produce and distribute some variant of the AK-47 rifle model.

So, what is AK-47, the marijuana strain? According to the reputable weed breeder known as Simon at Serious Seeds, he originally developed AK-47 in the ‘90s by crossing four iconic landrace strains: Afghani, Thai, Mexican, and Colombian. Although Simon has never explicitly stated why he named this landrace mega-hybrid “AK-47,” it’s possible the name came from the gun’s popularity in countries of the strain’s genetic origins. The Afghani and Thai militaries regularly assign their troops AK-47 rifles. Additionally, Mexican drug cartels favor the AK-47 rifle for its simplicity and reliability, whereas the Colombian terrorist group FARC got its AK-47 carbines direct from the USSR.

But AK-47 the weed strain, despite its namesake’s deadly legacy, is anything but dangerous, lethal, or menacing. Genuine AK-47 bud is known for offering a deeply chillaxed, couch-locking high. Many user self-reports claim that although the strain is definitely a knock-out, it can also stimulate creativity or whuppin’ ass on video games. 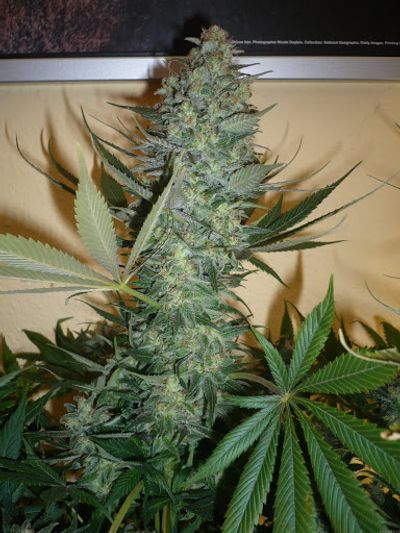 In terms of THC content, AK-47 regularly tests around 16 percent THC, which actually places it slightly below-average in terms of THC levels. So, given these not-so-impressive THC amounts, how does AK-47 provide its well-known, potent blast to the head? The answer may lay in the strain’s terpene profile.

Terpenes are aromatic compounds that give weed its characteristic smells and flavors. A growing body of evidence suggests that terpenes may also affect the kind of high someone experiences. In AK-47’s case, the strain’s three most prominent terpenes are myrcene, caryophyllene, and pinene, according to the lab data at Leafly. Myrcene is known for contributing to some strains’ “couch-lock” effect. Caryophyllene reduces anxiety and potentially “takes the edge off” of THC, while pinene is known for heightening alertness and mental focus. These three terpenes combined, along with the strain’s cannabinoids, could explain why AK-47 can glue a toker to their chair while keeping their mind active.

Basically, if you see some AK-47 at your local dispensary, do yourself a favor and load up on some of that flower. Its tried-and-true genetics, consistency of effect, and decades worth of acclaim make it a surefire winner when it comes to getting lit AF on the dankiest of dank.

STRAINS
EDUCATION
FLOWER
FLOWER STRAINS
MORE...
MERRY JANE Staff
FOLLOW
MERRY JANE is based in Los Angeles, California and is dedicated to elevating the discussion around cannabis culture.
Share this article with your friends!
AD
By using our site you agree to our use of cookies to deliver a better experience.
Accept
Decline
MORE FROM MERRY JANE