CULTURE
What Is a Spliff and How Do You Roll One Correctly?
AD
Here’s what you need to know about mixing tobacco and cannabis.
Published on August 15, 2019

Some cannabis consumers find spliffs to be an abomination. With so much fanfare made over terpenes and flavors, why would you ever want to literally let your joint’s flavor go up in smoke by tossing in some tobacco?

It’s a fair question with several answers, but before we get there, let’s get some basic terminology out of the way.

A spliff is a mixture of both cannabis and tobacco, plain and simple. This differs from a joint, which is rolled exclusively with cannabis. A blunt, meanwhile, also contains only cannabis but is rolled with thicker, more durable wraps made of tobacco (often dark brown).

US cannabis consumers are likely less familiar with spliffs than their European counterparts, who largely prefer a blend of pot and tobacco, or even hash and tobacco. These cultural distinctions are likely the result of the way smoking has become integrated into European (as well as Asian) culture. 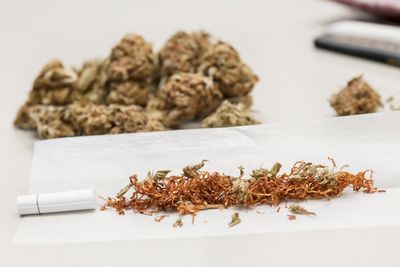 Why Would I Smoke a Spliff?

As for the reasons as to why individuals may prefer spliffs over joints, there are several common arguments to consider.

Cannabis is not an inherently convenient substance to grind and roll all on its own. One benefit of using tobacco is that it lessens the overall stickiness and resistance when it’s time to roll up.

Aroma is indisputably the most difficult aspect of cannabis consumption to hide. If you’re smoking pot in a traditional form (aka combusting flower with a lighter), the aroma that will result is pretty much impossible to deny. By smoking a spliff, the “stench” will be drastically lessened, leading to a less obvious scent. This assumes, of course, that you don’t mind the smell of burning tobacco…

Another reason some consumers opt for spliffs is that they like the experience of smoking a joint but don’t wish to ingest that much cannabis in one sitting. By adding in tobacco, you reduce the overall amount of cannabis in the joint.

In today’s legal landscape, pre-rolled joints can pack a seriously potent punch. Spliffs are a great alternative for people who like to chainsmoke, particularly if you’re with a group of friends and only have limited amounts of bud. The more tobacco you use, the less stoned you’ll get, which can help make a sesh last longer.

The main reason people smoke spliffs, of course, is that they like them. It is also only fair to note that the argument against smoking spliffs is also quite clear-cut: tobacco is bad for you.

The process of rolling a spliff isn’t drastically different from the standard procedure employed to roll a joint, but here are a few pieces of advice to ensure an easy-burning blaze sesh.

While many categorize all types of tobacco as “bad” and leave it at that, using a quality brand will make a huge difference when it comes to your spliff. Using roll-your-own tobacco, which often come in pouches, should do the trick. We prefer brands like Amsterdam Shag and Golden Virginia, though Bali Shag will work.

American Spirit and Drum both make rolling tobacco, but they are often very dry, which will make it harder to roll. In general, the more moist your tobacco is — but not too moist! — the easier it will be to twist it, light it, and hit it.

Avoid shopping for your spliff tobacco at establishments that look like they haven’t gotten a restock since the last Summer Olympics. Rolling tobacco is always prefered to breaking open a machine-rolled cigarette, which is generally dry and full of more additives. 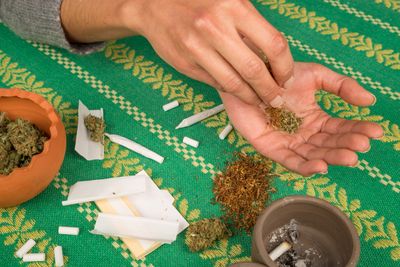 When we roll joints, the final flourish is always to twist the end and seal it. This works well for cannabis, which is slower to burn, but not as well for spliffs. Roll your next spliff without the end twisted (unless you’re taking it on-the-go) and see if it lights any easier!

If you want to smoke a cigarette, smoke a cigarette. The average spliff has at least 50% or more cannabis, but some people prefer tobacco-heavy smoking experiences. Be wary of sharing a spliff with any friends who quit smoking cigarettes — the tobacco might trigger a relapse. Many say the best spliff has about 25% tobacco, but to each his own!

Pot etiquette dictates that you always tell someone if something has hash or is otherwise exceptionally potent before offering them a hit. The same can be said for spliffs. Many folks would prefer not to smoke tobacco at any point in their lives, and it's your job to ensure that an unknowing hit of a spliff doesn’t spoil that. Tell people what you’ve rolled and let them decide whether to partake. Worst-case scenario? More spliff for you!

EDUCATION
TOBACCO
CIGARETTES
PRE-ROLL
MORE...
Zack Ruskin
FOLLOW
Zack Ruskin is a cannabis and culture journalist living in San Francisco. Follow him on Twitter: @zackruskin.
Share this article with your friends!
NOMINATE YOUR POWER PLAYER
AD
By using our site you agree to our use of cookies to deliver a better experience.
Accept
Decline
MORE FROM MERRY JANE