CULTURE
What Exactly Is THCV and What Does the Cannabinoid Do to You?
AD
Do you ever wish there was a cannabinoid that actually got rid of the munchies? Well, meet THCV.
Published on September 10, 2019

By now, it’s fairly well known that cannabis has a special class of chemicals known as cannabinoids. For decades, the most popular (and sought after) was tetrahydrocannabinol, or THC. Over the last several years, cannabidiol, or CBD, took center stage for its health benefits and potential to treat debilitating conditions such as epilepsy and chronic pain.

Today, minor cannabinoids such as cannabigerol (CBG) and cannabinol (CBN) have also gained attention for their possible therapeutic effects. But the there's another cannabinoid garnering attention for more than just treating seizures and pain. It's called THCV, or tetrahydrocannabivarin, and more and more people are starting to use it.

But what exactly is THCV, and what does it do when you consume it? 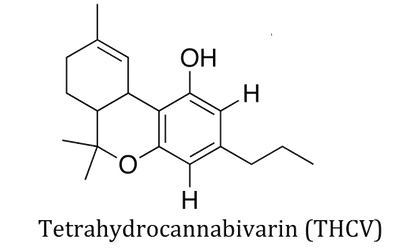 Like all cannabinoids, THCV is formed in the glandular trichomes found on cannabis plants, particularly the flowers. THCV begins as cannabigerovarin acid (CBGV-A), which, along with cannabigerolic acid (CBG-A), is one of the two precursor cannabinoids from which the others are derived. CBGV-A is converted into THCV-A (tetrahydrocannabivarin acid) through the action of enzymes. THCV-A is ultimately converted to THCV with the application of heat or light through the process known as decarboxylation.

THCV and THC are chemically similar, but their effects on the body and mind are different. Like THC, THCV is psychoactive, producing a high that can be more intense and psychedelic than THC, although for a shorter duration of time. Both THC and THCV are active on the endocannabinoid system’s CB1 and CB2 receptors, but at low doses THCV seems to act as an antagonist of the CB1 receptors. This means that small amounts of THCV may actually inhibit the buzz from THC. At higher doses, however, THCV serves as an agonist for CB1 receptors and the cannabinoid's own psychoactive effects become more apparent.

Although research into the effects of THCV is limited, preliminary studies show that the cannabinoid may have several important medical benefits for humans. One effect of THCV that's drawing a lot of attention is its apparent ability to act as an appetite suppressant, an attribute that could actually mitigate the “munchies” commonly associated with smoking pot.

One study found that this characteristic of the compound could potentially treat obesity. THCV could also one day be used as a therapy for diabetes. Current research shows that, together, CBD and THCV seemed to help type 2 diabetes patients maintain glycemic control; while another study found that THCV may actually help regulate blood sugar levels.

THCV also shows potential as a treatment for epilepsy. In a 2015 study, the compound was found to have anticonvulsant properties. THCV was also determined to be a possible treatment for disorders such as Parkinson’s disease, according to research conduted in 2011. The study determined that THCV is an antioxidant that has neuroprotective properties and could delay neurodegenerative diseases. In 2015, a UK study concluded that THCV could have “therapeutic potential for ameliorating some of the negative, cognitive, and positive symptoms of schizophrenia.”

Like many other cannabinoids, THCV also has anti-inflammatory effects, according to a 2010 study. The research found that the compound reduced signs of inflammation and pain in mice. THCV may also act on CB2 receptors in bone marrow and improve bone health, according to research published in 2007.

So, to say the cannabinoid has a multitude of uses is an understatement. Clearly. 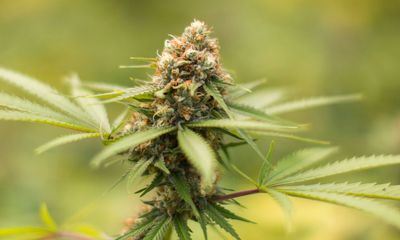 What Cannabis Strains Are High in THCV?

Although most common strains have trace amounts of THCV, many cultivars that have been hybridized to incorporate African landrace genetics show higher levels of this cannabinoid. Durban Poison, for example, can have levels of THCV of up to 0.5 percent. Pineapple Purps is reputed to have up to 4 percent of the cannabinoid. Other strains with a higher-than-average amount of THCV include Girl Scout Cookies, Cherry Pie, Doug’s Varin, Face Off OG, and Jack the Ripper. Strains high in THCV have a reputation for being more euphoric than others, but some attribute this trait to similar terpene profiles.

In July 2019, California cannabis brand Flow Kana announced the release of a new strain, Pink Boost Goddess, boasting THCV levels of up to 4.24 percent. In a press release, the company touted the appetite-suppressing qualities (among others) of the flower being grown in small batches by independent farms.

“We believe there is great healing potential in sungrown flower that possesses this rare THCV cannabinoid and are honored to play a role in bringing this unique cultivar to market,” said Michael Steinmetz, the CEO of Flow Kana. “We are grateful for the farms, like Emerald Spirit Botanicals, who have prioritized keeping this seed stock heritage alive through generations.”

As more strains of cannabis high in THCV hit the market and research into the cannabinoid’s effects continues, even more beneficial uses of the compound are sure to be found. In the meantime, if you’re looking for weed that doesn’t give you a bout of the munchies, give a strain high in THCV a try.

420
HEALTH
SCIENCE
CANNABINOIDS
MORE...
IN THIS STORY
CBD
Click to shop at our CBD store
A.J. Herrington
FOLLOW
A.J. Herrington is a freelance writer focusing on cannabis news, business, and culture and has written for publications including High Times, Sensi, and HEMP. When he's not banging away at the keyboard, you'll probably find him tending to his plants in the garden.
Share this article with your friends!
AD
By using our site you agree to our use of cookies to deliver a better experience.
Accept
Decline
MORE FROM MERRY JANE