CULTURE
What Exactly Is a Thai Stick, and How Do You Smoke One?
AD
Thai Sticks are essentially the OG cannabis cigar. When rolled properly, they burn like velvet. So how do you make one for yourself, and why aren't they more popular in 2019?
Published on August 16, 2019

Even the most experienced cannabis connoisseur may be unfamiliar to the world of Thai Sticks and how they're smoked. Put simply, these green giants are whole-bud cannabis cigars wrapped in plant leaves. However, when you peel back the layers on these weed kebabs, you’ll find that there's far more going on than you might imagine. 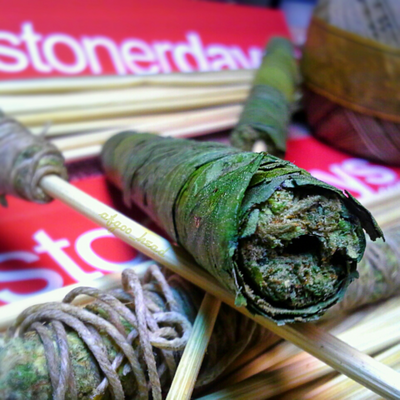 History of the Thai Stick

Thai Sticks were introduced to America after the Vietnam War, when soldiers came back to the US straped with these potent blunts. And Americans imediately fell in love with them because they got you high as hell. Many believed the Thai Sticks of yesteryear had opium in them, but no one knows for sure. Realistically, it was probably the hash oil used to bind them that convinced people they were puffing on something stronger. These original cannagars were likely more potent than American weed was at the time. 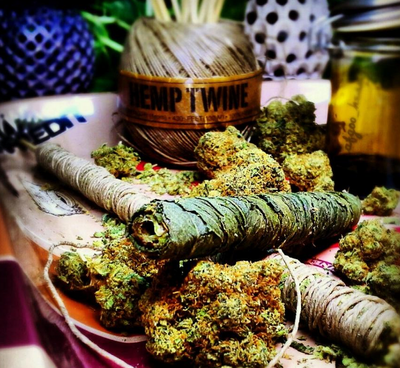 How Do You Make a Thai Stick?

First, take your bud and skewer it with a bamboo stick, kebab-style. Long before Americans got their hands on Thai Sticks, it's believed that the bamboo skewers were dipped in opium, which obviously launched smokers into a wild high. Today, however, hash oil or sugar water is used to coat the skewer, helping the seedless nugs mold around the stick. The choice between using hash oil or sugar water depends on how high the smoker wants to get.

Once the cannabis secures tightly around the stick, the buds are then wrapped in plant material, tied with hemp wick, and vacuum-sealed to cure. Most smokers choose to wrap their Thai Sticks in leaves from the marijuana plant, similar to the way Southeast Asian cuisine uses banana leaves to wrap certain dishes. In other words, you can tailor your Thai Stick to your preferred method of smoking.

While it may seem odd to vacuum-seal your weed instead of smoking it right away, sealing it allows the buds to cure, an integral step in the Thai Stick creation process. Curing allows for the moisture to leave the buds while allowing the natural oils and terpenes to come to the surface for a supreme smoking experience. The wrapping and curing process is often repeated two or three times to ensure all of the moisture has left the buds.

Some veteran smokers even choose to dip their Thai Sticks in hash oil or wax, and sometimes even roll it in kief after the final curing process, creating the ultimate layered blunt. 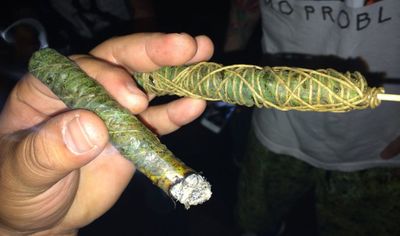 How Do You Smoke a Thai Stick?

Though the process of creating Thai Sticks is time-consuming and complex, smoking one isn’t. Once your Thai Stick has been assembled and cured, you simply untie the string, remove the stick from the center, and smoke! It might seem a bit strange to have a tunnel running through your Thai Stick, but without it, the lack of airflow would make inhalation impossible. 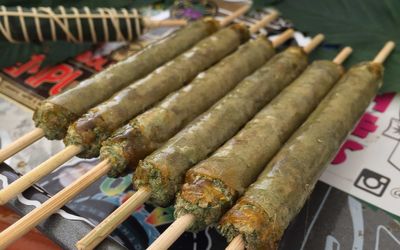 Why Haven’t I Heard of Them?

Like many mind-altering substances, Thai Sticks had their heyday in the '60s. Nowadays, many Americans have no idea what Thai Sticks are, as the practice is almost exclusively embraced in Thailand.

There’s no one particular reason why these green giants are no longer popular in the States. But they may have a resurgence, as the marijuana industry continues to grow and evolve. Plus, who doesn't want a blunt that burns for six hours and gets you high as fuck?

Thai Sticks are whole-bud cannabis cigars — next level blunts, if you will — wrapped in leaves. It’s not an easy process to make one, but if you can figure it out, it'll be one of the finest highs of your life. The perfect Thai Stick may take weeks to cure. But if you have the patience, the final result is worth it: you might just feel like you're getting high for the first time, all over again.

HOW TO
EDUCATION
THAILAND
BLUNTS
MORE...
MERRY JANE Staff
FOLLOW
MERRY JANE is based in Los Angeles, California and is dedicated to elevating the discussion around cannabis culture.
Share this article with your friends!
AD
By using our site you agree to our use of cookies to deliver a better experience.
Accept
Decline
MORE FROM MERRY JANE