CULTURE
What Are Weed Diamonds and How Do You Make This Super Pure Form of Cannabis?
AD
Move over Marilyn Monroe, because diamonds are a stoner’s best friend, too.
Published on April 16, 2020

While potency, taste, and safety may represent the holy trinity of valued pot product characteristics, it’s hard to beat the aesthetics of crystalline THCA. In the beloved romantic comedy Gentlemen Prefer Blondes, Marilyn Monroe gives an iconic performance of “Diamonds Are a Girl’s Best Friend,” but today, THCA “diamonds” aren’t entirely dissimilar to the high-end gemstone at the center of her song.

Both are rare, and as a result, expensive. However, unlike the diamonds we wear in rings, THCA diamonds must be refined from extracted cannabis oil. Weed diamonds are also unique in that they won’t get you high unless properly heated — at which point, get ready...

To help consumers better understand this relatively new addition to the panoply of cannabis products, here’s a primer on weed diamonds and how they’re made. What Are Weed Diamonds?

These things are a bit complex! Essentially, weed diamonds are crystals created by extracting the live resin from a cannabis plant using a cold-extraction method and then applying pressure to that oil by means of a chromatography machine until it takes its signature crystalline form.

This temperature part of the extraction is key, because unlike THC, THCA is what’s known as an inactive cannabinoid. THCA, which stands for “THC acid,” is basically just the same THC we know and love with a few extra atoms attached. Those extra acid atoms means THCA will not provide the psychoactive properties that consumers expect from ingesting THC — unless it is activated with heat. This process is known as decarboxylation.

As for the name “diamonds,” it’s pretty self-evident once one sees what crystalline THCA actually looks like. Rarely larger than a few millimeters across, these diamonds are 99 percent THCA, with the remaining 1 percent consisting of other terpenes and cannabinoids. Weed diamonds thus represent the purest form of the plant’s most famous cannabinoid available today.

The key to unlocking the THC from THCA is to smoke or vaporize these crystals. However, it’s important to remember that diamonds are essentially the Everclear of cannabis. The THCA potency of commercial flower is often around 25 percent, while concentrates regularly test anywhere between 70 and 90 percent. Diamonds, by contrast, are just a hair shy of 100 percent THC, which is why even experienced consumers often treat THCA crystals as a heady sesh supplement as opposed to an entree.

Consumption of diamonds often includes “capping” another, less potent concentrate such as wax or shatter by topping it off with some bits of THCA crystals. Remember: Diamonds have the potential to be four times stronger than hitting a joint.

In order to fully understand the appeal, and luxurious cost, of weed diamonds, it helps to understand how they’re made. 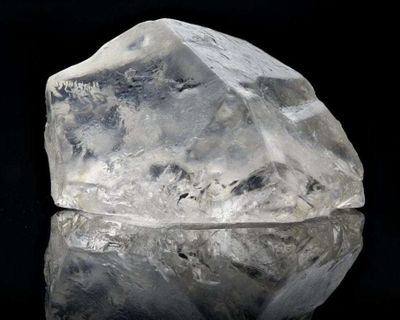 How Do You Make Weed Diamonds?

Unlike some of the other how-to guides at MERRY JANE, weed diamonds require some seriously heavy-duty machinery, as well as expertly handling some incredibly toxic and volatile solvents. In other words, you’ll likely blow yourself up trying to make THCA diamonds before you’ll ever get to bang them on a dab nail. Only certified pros should attempt this, and even then, only in a regulated lab with extensive safety measures in place.

Step I: Make hash oil using a live cold-extraction method. The goal is to ensure the THCA does not convert to THC as a result of the extraction process. THCA will crystallize under the right conditions; THC will not.

Step II: Put the oil through a winterization process, which is just mixing the oily extract with Everclear, freezing it, then filtering the product.

Step III: Soak the winterized hash oil in a methanol liquid before using a rotary evaporator (or rotovap) to remove the methanol.

Step IV: Wash the oil in a pentane solution to remove any remaining plant matter residue. Run the rotovap again.

Step V: Here’s where the chromatography machine comes into play. It essentially puts pressure on the oil that compounds it into crystalline form.

Step VI: Allow the diamonds to dry for three to 12 days.

Viola! That’s the secret to weed diamonds. Again, this a process best left to expert professionals. Good thing several brands currently offer THCA crystals for sale in US markets, so you don’t have to risk your life or your neighbors’ just to get lit. These dank diamonds may be pricey, but who can put a cost on (best) friendships?

HISTORY
CULTURE
EXTRACTS
CANNABINOIDS
MORE...
Zack Ruskin
FOLLOW
Zack Ruskin is a cannabis and culture journalist living in San Francisco. Follow him on Twitter: @zackruskin.
Share this article with your friends!
AD
By using our site you agree to our use of cookies to deliver a better experience.
Accept
Decline
MORE FROM MERRY JANE