CULTURE
What Are Trichomes and Do I Want Them in My Weed?
AD
Get crystal clear on what’s in your cannabis.
Published on July 25, 2019

Cannabis without trichomes would be like a pool without water: deprived of one of its central ingredients (but probably still fun for skateboarders).

Simply put, trichomes are resin glands. They are also a fundamental component of what makes pot so special. You may know them better as that layer of crystalline frost on cannabis nugs, buds, and leaves. In some cases, you may rue them as the culprit for your sticky fingers after rolling a joint.

Though trichomes are indeed both of those things, they are also much more. They are the proverbial factories that produce terpenes and cannabinoids — the two things that, together, essentially define a given flower’s flavor, effect, and potency.

Understanding trichomes can be a critical element in determining what varieties of cannabis will work best for an individual. If you’re ready to learn more, here’s a crash course behind pot’s secret ingredient. 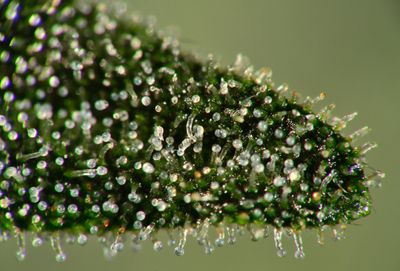 Etymology enthusiasts should note that “trichomes” derives from the Greek word tríchōma, which translates to “growth of hair.” That’s an apt choice, as cannabis trichomes do tend to resemble fine hairs. As for their function, trichomes offer different benefits to different plants (they also exist on all manner of plants, algae, and lichens). When it comes to cannabis, they act as a form of defense for female pot plants, thanks to their bitter taste and pungent scents. Furthermore, they also help protect against ferocious winds and potentially harmful UV rays.

There are many varieties of trichomes, but only three types contain THC and other medicinal cannabinoids:.

Bulbous trichomes: The tiniest of the three (10-15 micrometers).

Capitate sessile trichomes: The middle option by both size and amount.

All three types of trichomes produce cannabinoids and secrete essential oils, which we rely on to define the characteristics of different strains.

Farmers must often trust their own observational skills when it comes to gauging plant health.

In the case of cannabis, they’re often looking closely at trichomes, as their lifecycle runs parallel to that of the whole plant. The maturation of a cannabis plant usually coincides with a change in trichome color, most often evolving from clear to cloudy to amber. By watching for telltale signs in color transition, farmers can see if their crop is progressing as expected.

In some cases, however, trichomes will not necessarily change color when maturation occurs, so it's imperative that farmers know the specific characteristics of the type of cannabis they’re growing and what environmental variables may affect its growth cycle and trichome production. 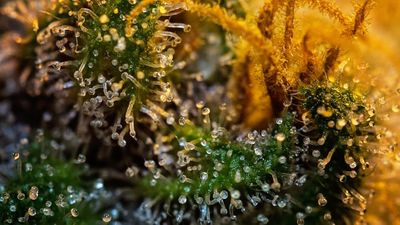 Given what we know, should you be looking at trichomes to determine what types of cannabis to buy?

First starters, trichomes are pretty dang cool to look at it. So if only for curiosity’s sake, why not take a minute or two to check out the thing you’re about to decarboxylate (aka heat) and ingest into your body? You’ll be amazed at what you can see just with a magnifying glass.

More practically speaking, there is no guarantee that an abundance of resin glands will directly equate to more THC, CBD, or other healing cannabinoids and terpenes. It is, however, a sign of a healthy plant — and the aesthetic appeal trichomes add is undeniable.

If you want to really take your trichome tutorial to the next level, you may want to think about learning how to make kief, hash, or shatter. All three are, in essence, concentrated trichomes separated from the main cannabis flower. The main difference in the three is form, with kief being a powdered form of hash (which is pressed), and shatter representing one of several outcomes when you concentrate cannabis resin.

Keep an eye out for those trichomes! They’re more than just beautiful lil crystals and hairs.

AGRICULTURE
STRAINS
EDUCATION
CULTIVATON
MORE...
IN THIS STORY
CBD
Click to shop at our CBD store
Zack Ruskin
FOLLOW
Zack Ruskin is a cannabis and culture journalist living in San Francisco. Follow him on Twitter: @zackruskin.
Share this article with your friends!
AD
By using our site you agree to our use of cookies to deliver a better experience.
Accept
Decline
MORE FROM MERRY JANE