CULTURE
What Are the Strongest Weed Strains of All-Time?
AD
Potency always varies based on how the cannabis is grown, but generally speaking, certain plants have proven stronger than others throughout weed history.
Published on June 10, 2019

Ever since ancient goat herders puffed the first bowls in history, tokers have always looked for stronger, danker weed.

Before cultivation became as sophisticated as it is today, weed usually contained only 1 to 4 percent THC. Now, we’ve got plants cranking out THC contents higher than 30 percent, which was once thought to be impossible.

While THC content is a good indicator for strong weed, bud potency isn’t based on THC alone. Other cannabinoids likely fiddle with the intensities (and onsets) of our highs, and there’s evidence that additional plant components, like terpenes, could contribute, too.

Assessing potency gets even more complicated with cultivation methods and lab-testing nuances, which have yet to become standardized. So bear in mind that this isn’t necessarily a list of strains with the highest reported THC percentages (though we’ll include those), or the richest terpene profiles. It’s not even a list of the best-selling buds, but sales were something we considered.

Rather, this is primarily a list of those strains which consistently brought tokers back for more; a collection of plants with iconic reputations — reputations they acquired for good reason. And while this list may not be complete, we’d argue it’s a comprehensive start. (We will likely publish a follow-up to this story, so stay tuned.)

Many of the uber-dank strains mentioned below made the final cut — above all others — because of their prominence in pop culture. For instance, Chemdog got its start in the parking lot of Grateful Dead concert back in the 1990s, and today, the band’s former drummer, Mickey Hart, exclusively sells Chemdog pre-rolls through his new celeb weed company. Or in the case of Green Crack — which supposedly got its moniker from Uncle Snoop himself — rose to fame because its speedy, mind-racing effects were branded right into its name.

So, without further ado, here are the famous strains that forever changed the breeding and weeding games because folks couldn’t get enough of them.

Chemdog ’91 is today’s grandma of commercial weed. But the strain became legendary because of its exceptionally high potency, which is saying a lot, considering its origins among Deadheads. The highest THC value ever recorded for Chemdog was at 32 percent from a High Times Cannabis Cup batch cultivated by Denver’s Next Harvest.

Not every weed strain gets its own song by the heady heroes Cheech and Chong, but, as they once sang, “Acapulco Gold is – badass weeeeed!”

Acapulco Gold is a Mexican landrace strain that originates from a region near Acapulco, hence the name. When it’s buds are broken up, it should exude a scent reminiscent of charred wood or burnt coffee.

Acapulco Gold usually tests above 20 percent THC, making it hella strong by both today’s standards and during its heydays in the ‘60s and ‘70s.

Lore says OG Kush’s birthplace is somewhere in Florida – an unusual origin story for weed plants with renowned reputations. This strain was likely the product of Chemdog crossed with a Hindu Kush landrace, and it’s since gone on to produce its own popular progeny, such as GSC, SFV OG, Ghost OG, Bubba Kush, and Headband.

OG Kush is typically marketed for its borderline-trippy psychoactive effects, which could be desired among some of the more experienced tokers, but not so much with novices. On average, OG Kush buds come in around 20 to 25 percent THC. 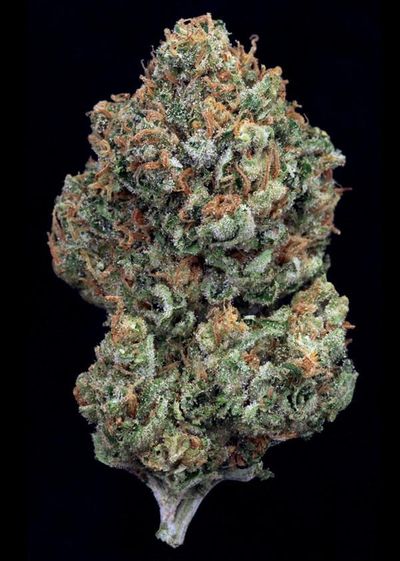 Although labeling a medicine “poison” may be a tad counterintuitive to the destigmatizing of cannabis (“Green Crack,” anyone?), Durban Poison’s name hasn’t dissuaded us from smoking boat-loads of it.

Hailing from South Africa (which recently legalized!) and introduced to the US by the illustrious breeder Ed Rosenthal, this strain was a top-seller in Colorado in 2017, becoming one of the first plants to knock Blue Dream from its previously reigning spot.

True Durban Poison should smell a little piney with some earthy-sweet notes not unlike licorice roots. Its potency has some wide variability, too – between 15 to 25 percent – so make sure to pick some up from only the best growers.

GSC used to be known as “Girl Scout Cookies” until a certain outdoorsy youth organization claimed trademark infringement. Born from a marriage of OG Kush and Durban Poison (which makes the aforementioned Chemdog part of its powerhouse lineage, as well), GSC has swept up awards from major cannabis competitions due to its candied flavors, chillaxed highs, and firey potencies of 25 to 28 percent THC.

Its progeny include pretty much every strain with the word “Cookies” in its name. 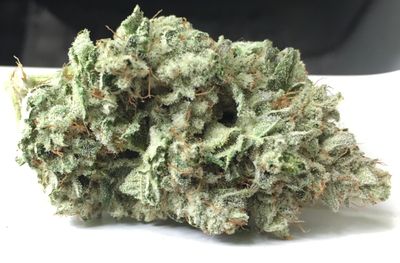 The Glue a.k.a. GG a.k.a. Original Glue, like GSC, used to be known by another name – Gorilla Glue. This was because its buds are so sticky you could practically sell ‘em as industrial adhesives on late-night infomercials.

Another top-seller in Colorado in 2017, GG often swapped the number-one spot with Durban Poison, depending on the week back then. It consistently tests above 20 percent THC, and some batches have reached as high as 32 percent. Heady strength aside, it’s also popular for its unique bouquet, which carries hints of gasoline mixed with hot chocolate. 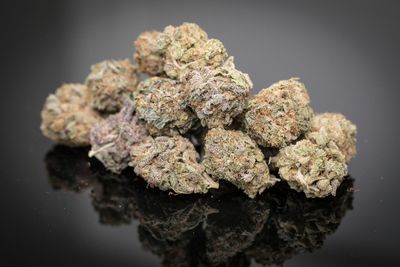 Unlike The Godfather of the cinematic mafia series, Godfather OG won’t make you sleep with the fishes, but it could put you to sleep — as in, in a bed. Or if you’re the graveyard-shift gamer type, it might lock you to the couch harder than the deflated kids in those infamous anti-weed PSAs.

At one point, Godfather OG held the top THC crown with values testing at a whopping 34 percent, making it one of the strongest weed strains ever recorded. However, most batches typically crank out between 25 to 28 percent THC, which is still nothing to sniff at.

Brownie Scout is fairly new to the weed scene, but given its purported THC content, don’t let the innocent name fool you: it’s a veritable Godzilla rampaging among the lowlier kaijra.

As its name implies, Brownie Scout has roots in GSC (formerly called “Girl Scout Cookies”), specifically the Platinum GSC strain, which was bred from OG Kush, Durban Poison, and a third strain. And given Brownie Scout’s genetics, this makes it yet another strongest-strain-of-all-time that descended from Chemdog.

According to recent lab tests, Brownie Scout may be the weed with the most THC content ever grown, with a peak at 37.5 percent THC. Its breeders claim it consistently produces over 30 percent THC. But since these values come only from a Green Thumb Industries (GTI) dispensary in Illinois, to get a shiny Brownie Scout badge, devoted tokers will need to relocate to the Prairie State. GTI currently markets Brownie Scout for “anxiety, pain, and insomnia,” so expect its smoke to be a knock-out.

As we mentioned at the beginning, this isn’t a complete list. Cultivators constantly improve their grow game, and new, stronger plants are appearing on dispensary shelves every day. And again, “best” and “strongest” strains are two entirely different beasts. High THC content doesn’t necessarily mean superior flower. For reference, the top-winning flower at The Emerald Cup rarely tests above 23% THC.

But for hardcore tokers on the lookout for plants that pack a punch, check out Green Crack, Strawberry Cough, Blue Dream, White Widow, Headband, Bruce Banner, Pineapple Express, Northern Lights, or White Fire OG. Assuming, of course, that your local dispensary hasn’t already sold out of them.

AGRICULTURE
STRAINS
HISTORY
LIST
MORE...
IN THIS STORY
CBD
Click to shop at our CBD store
Randy Robinson
FOLLOW
Based in Denver, Randy studied cannabinoid science while getting a degree in molecular biology at the University of Colorado. When not writing about cannabis, science, politics, or LGBT issues, they can be found exploring nature somewhere in the Rocky Mountains. Catch Randy on Twitter and Instagram @randieseljay
Share this article with your friends!
AD
By using our site you agree to our use of cookies to deliver a better experience.
Accept
Decline
MORE FROM MERRY JANE