CULTURE
What Are the Best Blunt Wraps for Serious Weed Smokers?
AD
Even with all the new high-tech ways to smoke weed, blunts will always remain one of the most OG methods for getting lit.
Published on September 18, 2019

If you’ve finally mastered the art of twisting joints, you’ll probably want to move on to more advanced rolling techniques. And nothing demonstrates a toker’s devotion to the cause more than a perfectly crafted blunt. (Actually, getting arrested while campaigning for cannabis is probably the best demonstration, but let’s assume most of us can’t afford to do that.)

Blunts are “weed cigars” made by rolling up cannabis flower with cigar wraps. They’ve been around for a long time, but they became incredibly popular in the ‘90s after rappers like Snoop Dogg and Dr. Dre made them marijuana mainstays in their lyrics.

Why smoke a blunt when a plain ol’ joint would suffice? Blunts are usually bigger than joints, which means you can stuff a lot more weed in one than you could a mere “marijuana cigarette.” And since cigar wraps are made with tobacco, they contain nicotine. Although nicotine can be addictive, it also constricts the blood vessels, which increases blood pressure. And some folks swear that the slight uptick in blood pressure makes the weed hit just a little bit faster and harder than it would otherwise.

Gallery — Fancy Ass Blunts for When You're Feeling Luxurious:

Besides the above mentioned reasons, blunts taste fuckin’ delicious, too. And they burn slowly, meaning your sesh will last longer than it would with a classic pre-roll.

But what truly makes a blunt isn’t the weed. It’s the wrap. And to ensure you always roll the very best blunts, you need to start with the best wraps, first. 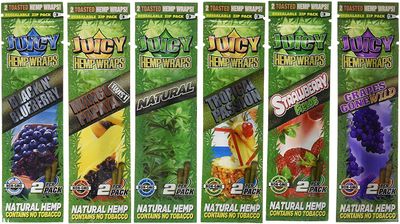 So, about that nicotine thing. A lot of cannabis smokers are current or former cancer patients, and smoking anything that contains nicotine may not be beneficial to their health. Thankfully, there are non-tobacco blunt wraps available, and some of the coolest brands aren’t made with just any kind of paper: These are made from cannabis itself. Just ask Lobo Cannagar, which makes weed cigars rolled into cannabis leaves. Yes, that means you’re smoking a green stogie.

Hemp wraps are still relatively new, but since they don’t contain nicotine or THC, you can buy them pretty much anywhere (read: gas stations). And in case you’re wondering, yes, they roll into blunts just as easily as tobacco wraps.

If you prefer your wraps to come packed with the candied flavors of fruit snacks, try a Juicy Jay’s Juicy Wrap. These triple-dipped hemp wraps are so, well, juicy, you may not even have to lick the wrap to seal it. They’re perf for those living in dry, blunt-wrap-killing environments like Colorado, as Juicy Wraps stay moist much longer than most other wraps, too. 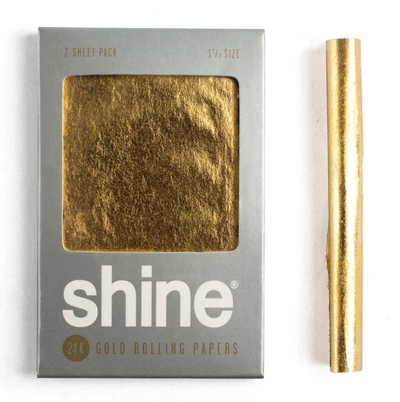 Smoking a cigar in public is one of the most baller ways to let everyone know you’re a boss. Blunts confer that same smokey authority, but if you’re gonna flaunt your badassery, might as well go whole-hog and twist that sucker with a wrap made of 24-karat gold.

Shine Gold Blunt Wraps are literally made from real, edible gold, and these things shine so bright, Rihanna just might cash in her diamonds for ‘em. But since they’re made with actual gold and not some sparkling paint, these wraps can put a dent in the bank account at $35 for a pack of two. “Ain’t nothin’ sweet but the Swishers!” rapped Lil’ Wayne over the 2011 track, “I’m On One.” Swisher Sweets are one of the most popular cigars for rolling blunts, but there’s a catch: Swisher doesn’t make blunt wraps, per se. Instead, tokers must slice open a Swisher Sweet cigar to remove the tobacco inside before stuffing it with weed.

Swisher Sweets come in a variety of flavors, but the original vibes best with most strains. It tastes like a normal cigar dipped in sugar, which is especially dope as you approach the end of the sesh and the bitter weed tar starts gunking up the blunt. Sometimes the standard-sized blunt wrap isn’t enough. Sometimes you gotta go big, real big. White Owl Wraps’ Xtra line are oversized, and you can fit an entire eighth of weed into one of these bad boys if you have nimble fingers. While some folks may consider that wasteful, you can minimize the loss by making sure everyone keeps passing that dutchie to the left. Speaking of dutchies, Dutch Master cigars are how blunts got that nickname. Dutch Master is old school with their cigar wrap production, and they retain that natural, earthy tobacco taste into each one. These wraps, even the flavored varieties, go well with earthy, gas-y weed strains. 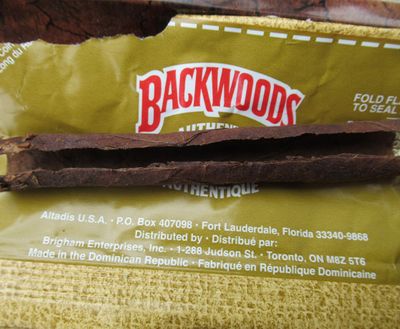 The ultimate display of one’s blunt-rolling prowess is the legendary Backwoods blunt. Like Swisher Sweets and Dutch Masters, Backwoods doesn’t supply empty blunt wraps. You’ll have to peel the wrap off the cigar, but these papers are much trickier to work with than Swishers. That’s because Backwoods cigars are rolled with actual (and brittle) tobacco leaves, not smooth tobacco paper fashioned from pulp.

If you’ve never tried to make a blunt from a Backwoods cigar, check out our guide on rolling your own like a pro. Now enjoy that blunt!

EDUCATION
CANNABIS CONSUMPTION
BLUNTS
SMOKING
MORE...
Randy Robinson
FOLLOW
Based in Denver, Randy studied cannabinoid science while getting a degree in molecular biology at the University of Colorado. When not writing about cannabis, science, politics, or LGBT issues, they can be found exploring nature somewhere in the Rocky Mountains. Catch Randy on Twitter and Instagram @randieseljay
Share this article with your friends!
AD
By using our site you agree to our use of cookies to deliver a better experience.
Accept
Decline
MORE FROM MERRY JANE