CULTURE
What Are the Benefits (If Any) of Eating Raw Cannabis Flower?
AD
There are many ways to consume cannabis and get high. But will eating dank nugs get you stoned and improve your health, or is it just a waste of weed?
Published on February 25, 2020

In case you haven’t noticed, cannabis edibles have come a long way since the stem-laden brownies of yesteryear. The legal cannabis industry, until recently flush with investment capital, has come up with myriad new ways of eating weed.

Gummies, cookies, capsules, mints, chocolates, hard candies, and even beverages — all infused with THC — can now be found at dispensaries in legal jurisdictions. Cannabis edibles have become so popular that sales of food and drinks containing THC in the United States and Canada could top $4 billion by 2022, according to data from Arcview Research.

But are all of those edible products really necessary? Do you really have to fork over your hard-earned cash to buy edibles or spend valuable time making them? If you can get your hands on some tasty nugs, why go through all the hassle? Can eating weed by itself get you high, and what are the benefits of gobbling some green?

Unfortunately, the answer is no. The fact is, live cannabis plants and freshly-harvested marijuana flowers have little-to-no THC. Instead, this herb is high in THCA (or tetrahydrocannabinolic acid), an unactivated form of THC that is non-intoxicating. To get you high, the THCA must be converted to THC, which can be accomplished with the addition of heat in a process known as decarboxylation. The THCA is converted naturally when pot is smoked or vaped thanks to heating it upon inhalation. Edibles made with cannabis flowers or concentrates also have to be decarbed in order to get you lit. Even dried and cured buds, which undergo some decarboxylation as they age, still contain mostly THCA.

Another reason eating weed won’t get you high is because, by itself, THC has little bioavailability. Unless the THC molecules are infused into alcohol or fat (such as butter or oil), or are processed to make them water-soluble, they aren’t going to be absorbed by the body when eaten. Womp womp...

But even though eating weed won't get you conventionally stoned, there are benefits to consuming raw flower. 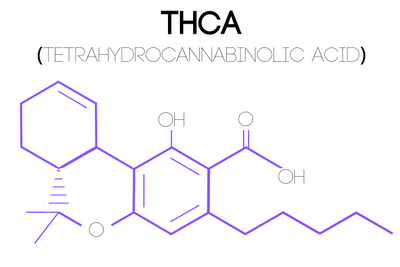 What Are the Benefits of THCA?

Eating weed is a thing. In fact, consuming fresh and fresh-frozen cannabis is becoming a bit of health craze. Even though THCA isn’t psychoactive, it still has beneficial properties for health and wellness. Many medical marijuana patients prefer formulations with THCA for times when getting lit on their medicine isn’t appropriate.

Research shows that THCA has several benefits that warrant further study. In 2013, researchers determined that cannabinoids including THCA might slow the growth and spread of some cancer cells. Another study in 2012 found that both THC and THCA can act as neuroprotectants that promote brain health. And, research in 2011 found THCA has anti-inflammatory properties. 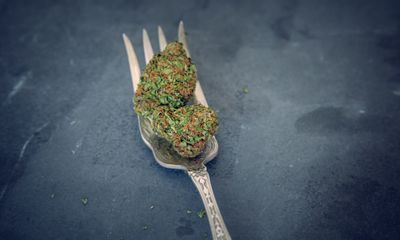 So, Is Cannabis a Food?

“You only need it as a medicine when you have forgotten it is food,” Courtney told Fox News (an admittedly shady outlet...).

“I believe this plant, having evolved over millions of years, is put together to support that system,” he said. “It’s clear that this plant is incredibly important for cell health, which at its best prevents disease.”

Courtney suggests that his patients consume cannabis, either fresh or fresh-frozen, as a regular addition to their diets. Fresh cannabis can be ingested by juicing, blending into smoothies, or chopped and added to salads or other recipes.

“When it’s consumed as a leafy green vegetable, you get the whole profile of the plant,” he said. “My experience day in and day out is overwhelmingly positive with patients who are using it.” 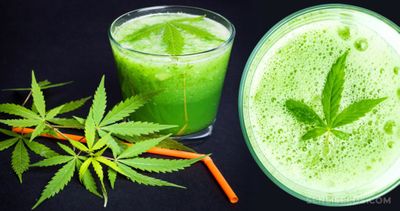 So, Where's the Proof?

One of those patients is Katie Marsh of Madawaska, Maine, who uses fresh cannabis to treat rheumatoid arthritis. She was looking for a way to treat her condition without using the powerful pharmaceuticals that are typically recommended, which can come with dangerous side effects.

“I white-knuckled it through the pain and only took pain killers when I absolutely needed them,” Marsh said.

Then she went to see Dr. Courtney, who helped her determine which cannabis strains were most likely to help her. After getting a bag of fresh cannabis from a local grower, she started juicing weed daily, mixing it into a fruit smoothly to make the taste more palatable.

“I saw results very quickly. Within a matter of a couple of days I was able to stop the prednisone and ibuprofen,” she said. After 11 months, although she was still experiencing pain in her feet from damage caused by her condition, the disease was in remission.

So while it’s true you can’t get high from eating weed, you still might want to give it a try if you use cannabis medicinally. It might be just what your body needs to help it get back on track.

THC
CANNABINOIDS
CANNABIS CONSUMPTION
FLOWER
MORE...
A.J. Herrington
FOLLOW
A.J. Herrington is a freelance writer focusing on cannabis news, business, and culture and has written for publications including High Times, Sensi, and HEMP. When he's not banging away at the keyboard, you'll probably find him tending to his plants in the garden.
Share this article with your friends!
AD
By using our site you agree to our use of cookies to deliver a better experience.
Accept
Decline
MORE FROM MERRY JANE