CULTURE
What Are THC and CBD Suppositories and Do They Actually Work?
AD
Cannabis suppositories are a hot topic at the moment, and their efficacy proves that marijuana is a medical miracle, no matter how it gets up inside you...
Published on April 7, 2020

For most of us, consuming cannabis is a function of the mouth. We smoke it, we vape it, and we eat it. Sometimes, maybe, we drink it. However, as society continues to embrace the leaf of life, the means of ingesting marijuana’s inherent magic are expanding in terms of techniques, technology, and, well, points of entry.

Cannabis suppositories are a hot topic at the moment. They exist in both rectal and vaginal forms, come in THC and CBD varieties, and, according to experts, they output fast, powerful results with little to no side effects — including the feeling of getting high.

Pot that that slips up your south side is also, apparently, nothing new.

As the rectal health organization Back Door Medicine explains, “For over 5,000 years, cannabis has been recorded as a healing medicine…. Enemas and suppositories (specifically) have a recorded history of over 2,000 years.” 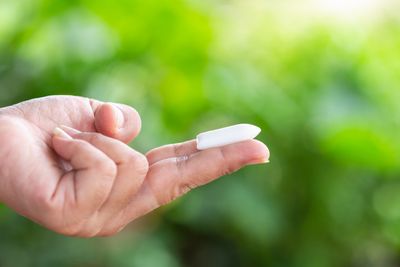 How Do Cannabis Suppositories Work?

Making THC and CBD suppositories is simple. It involves combining cannabis-infused oil with a base oil such as cacao butter, heating the mix, and pouring it into oval-shaped molds. The molds are then frozen, the oils harden, and workable cannabinoid delivery devices result. Then, you know where they go from there...

Upon being inserted into the proper cavity, the body absorbs the cannabis suppository’s active ingredients directly into the bloodstream, bypassing the liver. That’s why THC suppository users don’t get stoned. Health experts also say that’s what makes THC and CBD suppositories such potent forces in evolving medical treatments.

For patients who have issues with oral consumption such as lung disease, difficulty swallowing, or extreme nausea, cannabis suppositories are proving revolutionary. Among the conditions reportedly being addressed with CBD and THC rectal suppositories are chronic pain, gastrointestinal disorders, anxiety, depression, eating disorders, and hemorrhoids.

In 2013, no less a hemp hero than Tommy Chong proclaimed he beat prostate cancer with the use of marijuana suppositories. It makes sense, as cannabinoids have been medically determined to fight prostate cancer by pinpointing and eliminating cancer cells while leaving healthy cells untouched.

Exploring the same physical vicinity, a 2019 medical study determined that cannabinoid compounds may inhibit the growth of colon cancer. THC suppositories take that particular battle right to the front line. 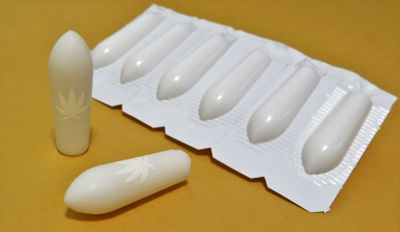 How Else Can Cannabis Suppositories Benefit Us?

CBD and THC suppositories also appear to be at the forefront of women’s health. Perhaps we should add, “again.” The study “Women and Cannabis: Medicine, Science, and Sociology” notes that ancient Egyptian healers used cannabis suppositories as far back as 3,000 BC.

Dr. Melanie Bone, a renowned OB/GYN specialist, said she recommends vaginal cannabis suppositories for severe cramps, pelvic pain, PMS, dysmenorrhea, and for certain sexual issues. “A lot of people have a lot of pain with intercourse,” Dr. Bone said. “I will try vaginal suppositories on those people, and some I do have nice success with it.”

A 2019 study also determined that medical cannabis is the most effective treatment for endometriosis, an extremely painful condition in which a woman’s uterine lining grows outside her uterus. Endometriosis affects about 10 percent of all women of reproductive age, and, beyond the debilitating pains, it can cause infertility and gastrointestinal issues.

Another study, titled “Cannabis Use, a Self-Management Strategy Among Australian Women With Endometriosis,” stated, “Women report good efficacy of cannabis in reducing pain and other symptoms, with few adverse effects reported.” The study also concluded that cannabis-using women experienced a decrease in gastrointestinal problems, nausea, anxiety, depression, and insomnia.

As evidence of the treatments’ efficacy, numerous endometriosis patients actively endorse vaginal suppositories infused with CBD and THC as bringing relief to their conditions. In the end, cannabis suppositories are revealing yet again that marijuana is a medical miracle, no matter how it gets up inside you.

HEALTH
MEDICAL MARIJUANA
INNOVATION
CANNABIS CONSUMPTION
MORE...
IN THIS STORY
CBD
Click to shop at our CBD store
Mike McPadden
FOLLOW
Mike McPadden is the author of "Heavy Metal Movies" and the upcoming "Last American Virgins." He writes about movies, music, and crime in Chicago. Twitter @mcbeardo
Share this article with your friends!
AD
By using our site you agree to our use of cookies to deliver a better experience.
Accept
Decline
MORE FROM MERRY JANE