CULTURE
Weed Is a Refuge: Old Pal and Shepard Fairey Team Up for Immigration Art Show
AD
The 'Legalize Humanity' art show is designed to give viewers insight into the struggles faced by refugees and immigrants navigating the sticky US immigration system.
Published on February 4, 2020

Lead image by Shepard Fairey via

Cannabis is so much more than getting high. It’s political. It’s cultural. It’s medicine. It’s also art. This past weekend, an art exhibition opened at a gallery in Los Angeles that emphasizes these truisms while also spotlighting the plight of underserved refugees and immigrants struggling to make a new life in the United States. Legalize Humanity, a benefit for the non-profit organization the Refugee and Immigration Center for Education and Legal Services (RAICES), will run at the Subliminal Projects gallery, which was founded by Shepard Fairey in 1995, through February 8th.

The event is being held in collaboration with cannabis brand Old Pal’s Legalize Humanity campaign, which was created to raise awareness around marginalized communities by supporting non-profits that serve these groups. A portion of proceeds from the show and Old Pal Provisions’ line of art prints, T-shirts, and accessories designed by LAND will benefit RAICES, which was founded in 1987 to assist Central American refugees attempting to navigate the US immigration system.

RAICES provides free or low-cost legal assistance to thousands of immigrant children, families, and refugees, as well as other services including social programs and bond assistance. The group also has an advocacy team that focuses on changing the conversation to support immigrant rights through public appearances and engagement on social media.

In response to the Trump administration’s family separation policy, a grassroots Facebook campaign called "Reunite an immigrant with their child" was launched in 2018 as a fundraiser for RAICES. After going viral, the campaign raised more than $12 million for the nonprofit, making it one of the most successful Facebook fundraisers ever. 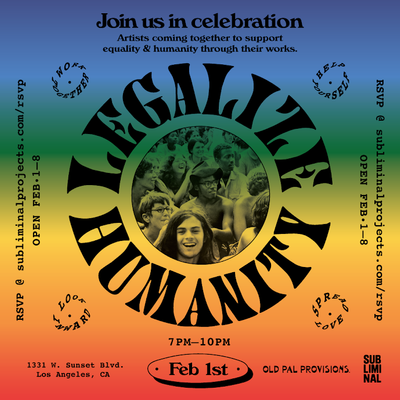 The Legalize Humanity pop-up exhibition will bring together Southern California artists to support marginalized communities with their works, many of which attempt to give viewers insight into the challenges faced by refugees and immigrants with imagery from their own experiences and those of their families. Contributing artists for the Legalize Humanity art show include Buckley, Camilla Engstrom, Ed Templeton, Ernesto Yerena Montejano, Evan Hecox, Hilda Palafox (aka Poni), LAND, Matt McCormick, Paul Windle, Petecia Le Fawnhawk-Maggiori, Sofia Enriquez, Shepard Fairey, Sterling Bartlett, Swoon, and others.

Enriquez, a painter and sculptor who currently lives and works in California’s Coachella Valley, tells MERRY JANE that the theme for Legalize Humanity hits close to home. Her parents immigrated to the United States from Mexico before she was born, determined to leave behind the poverty they experienced there. When Sara Kaplan, the associate director at Shepard Fairey’s Subliminal Projects gallery, told Enriquez about the upcoming exhibition, she says she jumped at the chance to help share the immigrant experience.

“I wanted to pull things from my memory of why my parents left Mexico,” she said in a telephone interview.

Enriquez’s contribution to the exhibition, an acrylic on wood painting titled Mucho desmadre (translated by the artist as “really big mess”), conveys the contrast between life for citizens of the United States and the immigrants who so fervently want to be welcomed into the fold. Enriquez depicts herself in the piece, surrounded by images of a family home left behind as she sits puzzling over legal documents. Even though they are written in a language she is fluent in, their meaning is difficult to decipher. She wants people to consider what a similar situation would be like for a refugee who doesn’t speak the language and is caught in a system set up to work against them.

“The less English you know, the more fucked you are,” said Enriquez. “I've been seeing that, and I just feel like this is not okay, you know?”

She also wants the work to inspire viewers to empathize with immigrants and refugees, and to realize they deserve dignity and rights just like anybody else. “It's that simple,” she said. “They're people. They're human beings that want a better life.” 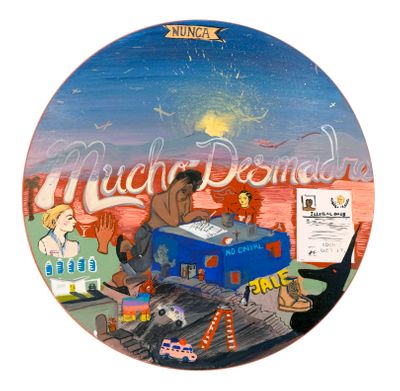 Allison Pankow, the chief marketing officer at Old Pal, believes that such empathy, especially when followed by action, can help make a better world not just for immigrants and refugees, but for everyone.

“It is our human values of compassion and the desire for harmony that strengthens connection and helps build community — a distinction that we can all sometimes take for granted,” said Pankow in a press release. “Moving forward with hope, trust, and love, Old Pal’s vision is to help people realize their power to create real change for humanity, communities, and the environment, with the emphasis that everyone in this world deserves the right to live with dignity and the support of their fellow humans. Even small steps in choosing who and what we support with our dollar can make a lasting impact ”

The 'Legalize Humanity' exhibition will be on display from February 1st-8th at Subliminal Projects: 1331 W. Sunset Boulevard, Los Angeles, California. Admission is free.

CALIFORNIA
ART
CULTURE
MEXICO
MORE...
A.J. Herrington
FOLLOW
A.J. Herrington is a freelance writer focusing on cannabis news, business, and culture and has written for publications including High Times, Sensi, and HEMP. When he's not banging away at the keyboard, you'll probably find him tending to his plants in the garden.
Share this article with your friends!
AD
By using our site you agree to our use of cookies to deliver a better experience.
Accept
Decline
MORE FROM MERRY JANE