CULTURE
Weed Eater and Diaper Changer: An Interview with Comedian Doug Smith
AD
A thriving stand-up career. A chart-topping new comedy album. A proud new father. And he still has time for weed. Meet Doug Smith, an inspiration for dads and heads everywhere.
Published on January 14, 2020

All photos by Eric Michael Pearson, courtesy of Doug Smith

Comedian Doug Smith was once stabbed in the face by a deranged assailant, but to hear him tell it, the incident was a breeze compared to fatherhood. Thankfully for Smith — whose sharp, self-deprecating style of comedy has made him a staple of the New York stand-up scene and earned appearances on Conan as well as his own web series (the self-defense satire, Secret Weapon) — the challenges of parenthood can be tempered by weed.

And as he details on his debut comedy LP, Barely Regal — which debuted at No. 1 on the iTunes comedy chart in December, 2019 — marijuana has helped him balance his career with parental responsibilities. “I know it can make me more patient and easygoing if I’m feeling stressed,” he said. 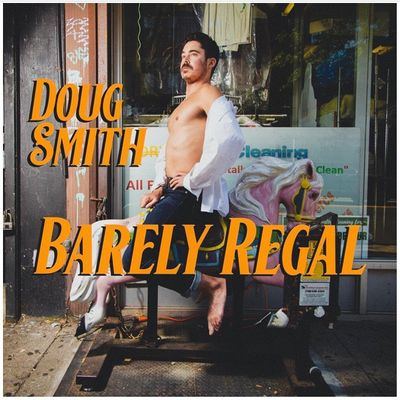 Weed also assists the stand-up in delivering smart, irreverent comedy. Another Barely Regal track, “We Like to Party,” neatly sums up both Smith’s approach to weed and his stand-up persona, which suggests a stoner and one-time hellraiser using his wits to navigate fatherhood and other grown-up concerns.

When his wife expresses concern over their son discovering his vape pen, Smith uses it as an opportunity to poke fun at himself and parental paranoia while also praising his kid’s nascent smarts: “She’ll go, ‘What if he gets high?’ I’ve had this thing for over a year — I’m not sure I’m getting high. He gets a decent hit off that thing, he’s fucking earned it.”

MERRY JANE caught up with Doug, who shared his thoughts on the pleasures and perils of performing stand-up, writing jokes, and being a dad while stoned. 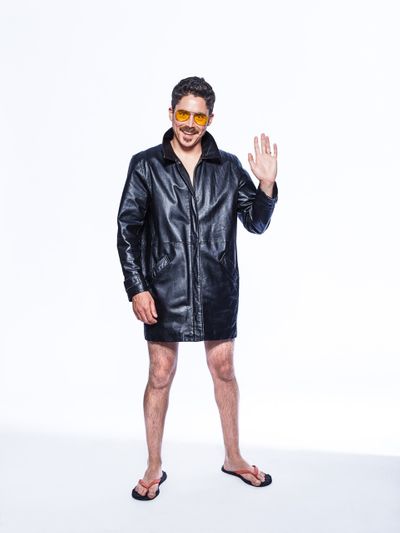 Doug Smith: [It was at the] Super Ego open mic at Parkside Lounge on the Lower East Side of Manhattan. I moved to New York City four years prior to pursue a standup career, but I had wasted all that time just being a drunk whore. I was doing improv at the time, because I felt like I could only handle being on stage if I was with seven other people. I was a very inconsistent improviser, and knew I was just spinning my wheels. But one of my friends on my improv team, Luke Cunningham, was actively pursuing standup, and I would always pick his brain after practice.

“Is it terrifying? What do you do if no one laughs?” I’d ask.

He said, “Well, who’s laughing at this shit?” referring to the improv.

I realized that with stand-up, you have some control. You can prepare. I already had some jokes written. I just had to take the plunge. So, the only New Year’s resolution I’ve ever made was in January 2009, when I vowed to do an open mic. It was abysmal, and everyone hated me, but luckily, I’m strongly motivated by spite.

How about the first time you tried weed?

I was raised a Jehovah’s Witness, so drugs, along with pretty much everything else, was forbidden. But by the time I was 17, I definitely had one foot out the door. Another girl in my congregation was in a similar position, so we gravitated toward each other. One time, I met her at this kid’s house in Norwalk, Connecticut. He had a shaved head, tattoos, and a gold grill. He was our age, but he looked like a grizzled ex-con. He had this pit bull puppy who kept pissing on the carpet. He didn’t even try to mop it up. He sprayed the piss stain with Clorox.

It was a very strange scene: playing Street Fighter and drinking Coronitas while multiple bleach spots spread across the floor. Eventually, he brought out a bubbler. I took a huge rip and immediately fell in love. I stayed another four hours smoking and drinking and then drove home to beat my curfew. I woke up the next morning, completely baffled as to how I got home. But I definitely wanted to get my hands back on that bubbler.

You mention vaping on Barely Regal. Is that your preferred method?

It was for about two years. It was just so damn convenient. Sleek, sexy. Just pull a pen from your pocket and toke wherever you want. And no smell! Took a lot of the stigma away from being a pothead. But, of course, that was too good to be true. People started dying, and even if I get cartridges from a “reputable source,” I get beyond paranoid the second I take a hit. So, now I’m back where I started: choking on ash from a one-hitter while setting my mustache on fire.

I like them if I have four hours to kill. I’ve had some serious freakouts, though. I did Conan in 2016 and popped a celebratory [infused] Tootsie Roll the second I stepped off stage. A few hours later, I’m having a full blown panic attack in my hotel room. All I wanted to do was take a shower, but I was shaking so hard I was afraid I’d slip and crack my head open. So, I just lay in bed naked, with a face full of makeup, thinking, “At least if I die, this will make things easier for the mortician.” Then, I thought, “No! I will not die alone in a hotel room!” That’s my biggest fear. So, I put on sweatpants and went down to the lobby so if I died, I would not be alone, but [instead] in front of a bunch of kids on a field trip to Universal Studios.

Have you ever written a joke while you were stoned?

Sure. Write high, edit sober. Actually it’s more like write high, realize it’s total dogshit sober. Weed definitely gets the creative juices flowing, but I do come up with some complete nonsense sometimes. But I [also] love how it opens your mind to letting every possible thought flow through you. It helps me get out of my own way, which is exactly what I need.

Have you performed while you were high?

Yes. Disastrous. There used to be a couple shows in NYC where that was the gimmick. Comics get high as fuck backstage and then do a set for a crowd that is also high. Everyone is in on the joke. But when you’re high, and the crowd is not, and you’re trying to keep your shit together... it’s terrifying. 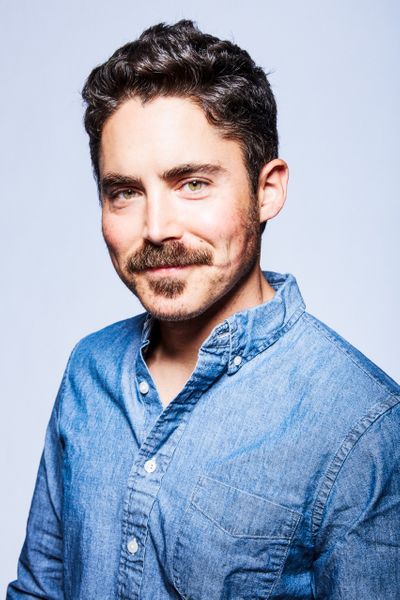 Does it help your comedy in any other way?

I like to smoke after a good set. The [natural] high [you get] from destroying a crowd is like drinking a gallon of Red Bull. It can keep you buzzing for hours, which, if you get off stage at 12:30am and you need to drive your kid to school the next morning, is not a good thing. So, I’ll smoke some indica to knock myself out.

Has your stand-up changed over time?

Absolutely. It’s probably hard to believe, seeing as how my biggest claim to fame is a 15-minute story about getting my face slashed, but I started out as a silly one-liner guy. “You guys into teabagging? Not me. What’s so great about dipping your balls in a cup of boiling water?”

Aside from trying to smuggle weed into Mexico, as you mention on the Barely Regal track “Weed Eater,” what was the best idea you conceived while stoned, but turned out to be a real disaster?

I just saw Uncut Gems while stoned outta my gourd, and that was a disaster. Probably the most stressful movie I’ve ever seen. Does not need to be enhanced with an extremely potent sativa.

They’re not all a bunch of freeloading shithheels bleeding their wives dry. Plenty of them are, I’m sure. But a lot of us are on career paths that free us up during daytime hours. Comedians, musicians, drag queens. It’s a pretty great setup I’ve got. My wife is a psychoanalyst who works during the day, and then she relieves me at night so I can do gigs. My son is almost never without at least one parent around. He’s got it too good, and he’s gonna wind up an entitled little prick.

Let's also dispel some myths about weed use and being a dad. There are new dads who love weed, but also might think that once the baby arrives, there's no more weed.

I definitely thought that. You have no idea what you’re doing, and you just want to keep them alive. If you’re prone to paranoia, weed will not help you feel like a more competent parent. I remember taking two weeks off from smoking after my son was born. My wife was out one night, he was asleep, and I thought it’d be safe to take a couple tokes off my one-hitter. Ten minutes later, I’m hovering over my son in his bassinet with my dirty, resin-crusted finger under his nose, checking his breathing and muttering, “I’m a bad dad. I’m a bad dad.” Now, I have a better handle on things.

Is there ever a parenting scenario where it might help to be stoned?

It’s very obvious when I’m high. My eyes look like paper cuts. So, I don’t really want him seeing that and wondering what the fuck happened to me. But if it’s a mild high, it can definitely enhance story time or arts and crafts. Anything where you need to get in touch with your [personal] inner child. Next time you go to the beach, sneak a quick toke in the bathroom and watch your kid’s eyes light up as you build the most bitchin’ sand castles he’s ever seen.

You have a number of projects going at any time: stand-up, your web series Secret Weapon, appearances on Comedy Central. How do you balance all of them and still have time to be a stay-at-home parent?

It’s tough to compartmentalize work, family, and downtime. They’re all important. It’s easy to be with your kid and come up with an idea for something, pull out your phone, and start typing away. But then you’re not being present, and your kid picks up on that. When you’re with your kid, be with your kid. When you’re not, don’t squander that precious time. Stay focused and work. When you have all the time in the world, it can fuel procrastination. Having a kid has made me way more disciplined than I ever thought possible.

When your son grows up, what will you tell him about weed?

[*Nate Dogg voice*] “Smoke weed everyday.” It’s medicine. It doesn’t agree with everyone, but if it makes you calmer, less anxious, and more creative, go for it.

What's next for you? Where can people next see you live, on the web, on TV?

My album Barely Regal is available now on all platforms. I’ll be at the Moontower Comedy Festival in Austin, TX in April, and hopefully back on the boob tube soon. Check my website www.dougsmithcomedy.com for tour updates, and follow me on Instagram @whodougsmith for video clips and links to shows around NYC.

INTERVIEW
ENTERTAINMENT
HUMOR
CULTURE
MORE...
Paul Gaita
FOLLOW
Paul Gaita has written for Variety, the Los Angeles Times, Costco Connection, The Fix, The Los Angeles Beat, and many other publications and websites. Visit his website http://bypaulgaita.com/
Share this article with your friends!
AD
By using our site you agree to our use of cookies to deliver a better experience.
Accept
Decline
MORE FROM MERRY JANE