CULTURE
Weed 101: What Are the Average Prices for Pot by Weight?
AD
A primer on the cost of cannabis by volume: ounces, eighths, grams, and so on!
Published on October 24, 2019

When it comes to bud, the choices at modern-day dispensaries are seemingly endless. Once you’ve dedicated some time to deciding what flower strain you’ll be bringing home, there’s also the matter of just how much of it you’ll need.

Understanding how cannabis is portioned is an excellent way to feel more confident when making a purchase. Buy too much cannabis and it risks going stale. Buy too little and… well, who wants to imagine a fate that bleak? Instead, let’s go over all of the different options you’re likely to encounter when it comes to cannabis costs by weight. 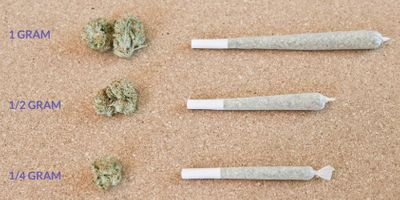 Prices noted below refer to expected cost at licensed, legal dispensaries. Expect prices on the unregulated market to vary wildly. It should also be noted that eighths, quarters, half-ounces, and ounces are all commonly-rounded to even numbers when sold but actually run to the thousandths place. For instance, an ounce of weed is technically 28.345 grams. We’ve all just agreed to be cool with 28 grams, so let’s go with it. Okay, we’re starting large (but for good reason). Some cannabis consumers will not be interested in purchasing an ounce, but it’s important for anyone buying weed to understand the vital role ounces play in how we measure cannabis.

An ounce — sometimes called a “zip” — is the equivalent of 28 grams, thus common measurements like an “eighth” or a “quarter” refer to a percentage of an ounce. Do the math and you’ll find that an eighth equates to 3.5 grams. A quarter, by extension, is then 7 grams.

For reference, pre-roll joints available at dispensaries often weigh either a gram or, in the case of “mini” joints, half of a gram. This means purchasing an ounce is the equivalent of buying 28 joints or 56 mini joints. Now that we have a baseline, let’s get into how the pricing for cannabis works.

Gallery — Moldy Marijuana and Signs That Your Bud Is Bad:

What Does It All Cost?

A gram of cannabis is likely to be the smallest quantity available for purchase at a dispensary. While some may feel that a gram is all they’re likely to need, the only true purpose for buying weed at a size this small is to “test” a strain you’re curious about before making a bigger commitment. Regardless, one should expect to pay between $5 and $15 for a gram. As we’ll see throughout this guide, it’s necessary to offer a range, as prices tend to be higher on the East Coast (where resources are far less abundant).

In the past, we’ve explained what a “dub” of weed means (a $20 purchase from the black market), as well as a “dime” of weed (a $10 purchase from the black market). Sometimes a dub or dime may equal a full gram, but that all depends on the person selling you bud under the table. If you go into a dispensary, asking for a “dub” might result in some blank stares from your budtender.

If an eighth is 3.5 grams, and a gram costs between $5 and $15, what does an eighth cost? Do you feel an attack of standardized testing PTSD coming? Don’t worry, we’ve got the answer. By the logic above, eighths should cost between $17.50 and $46.50. That’s not exactly the range one should expect, but it’s not miles apart either.

It’s probably safer to think of eighths as being in the $25 to $50 range. Anything less than $25 (not including discounts and sales etc.) and one should give some serious thought to the quality of the flower in question. For eighths priced in excess of $50 — of which there are many — feel free to ask a budtender what makes it so costly. It could be that you’re about to get something super rare and delicious, but it could also be a red flag that your dispensary is jacking their prices up.

Now we’re talking! If an eighth is the gold standard for a moderate cannabis consumer interested in trying different strains, a quarter (aka 7 grams) is like buying it at Costco. If you love a strain and don’t want to have to make a quick return visit to grab another eighth, a quarter is definitely the better way to go. Let’s continue on to see where the savings really start to add-up. 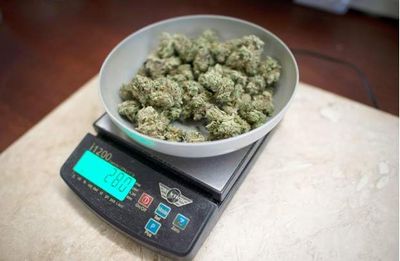 We’re going to group half-ounces and ounces together because the main talking point for both is the idea of savings. Half-ounces equate to 14 grams and often costs between $100 and $150, although there are definitely deals to be had at this quantity. For instance, Bay Area delivery service Eaze offers half-ounces of Old Pal for $50. That’s partially because Old Pal is pre-ground flower only suitable for joints. The point here is that anomalies to the cannabis price structure are anomalies for a reason.

Ounces, meanwhile, equal 28 grams and are priced anywhere from $100 to $300. Many dispensaries offer deals on ounces, which accounts for the lower end of this range. In any case, if the quantity isn’t overwhelming, there’s no question that your wallet will thank you for buying in bulk.

Now hopefully your next dispensary trip will be easier to navigate, sans-confusion. But when in doubt, ask your budtender questions! They’re there to help. And, oh yeah, you can and should leave your scale at home — the dispensary won’t short you on a purchase! Happy toking, y’all.

DISPENSARIES
EDUCATION
CULTURE
INDUSTRY
MORE...
Zack Ruskin
FOLLOW
Zack Ruskin is a cannabis and culture journalist living in San Francisco. Follow him on Twitter: @zackruskin.
Share this article with your friends!
AD
By using our site you agree to our use of cookies to deliver a better experience.
Accept
Decline
MORE FROM MERRY JANE