CULTURE
Weed 101: How to Roll the Perfect Joint
AD
Spoiler Alert: Twisting up the perfect doobie will require a ton of practice and a lot of wasted rolling papers.
Published on December 13, 2019

The joint, known to dorks the world over as the “marijuana cigarette,” remains a popular weeded mainstay despite the rise in fancier pot tech such as vape pens, transdermal patches, and… infused bedding.

But the joint ain’t no rookie consumption method. To properly roll one requires experience, so if you’re brand new to the ganja game, don’t feel too discouraged if you can’t get it right on your first, uh, 100 attempts.

Before we dive into how to twist up one of these bad boys, let’s look at some of the advantages to rolling your own joint as opposed to, well, any other consumption route.

First, joints are hella convenient. You can roll up several, place them in a relatively sturdy container, then blaze up whenever the opportunity strikes. Joints are also very much shareable, so they’re great for social smoke seshes.

Second, rolling your own joints gives you power over what goes into your lungs. You can mix-and-match strains that best suit the effect you’re going for, or you can twist in other weed products like hash, kief, shatter, wax, crumbles, or — gasp! — even tobacco, you rebel.

Third, joints are fuckin’ sexy. But how do you roll a perfect one? 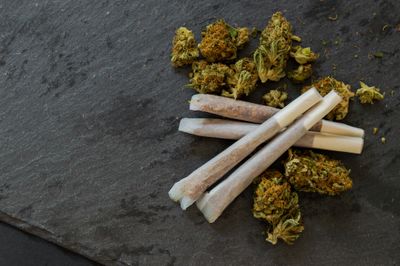 Before you can properly roll a joint, you need to break up your weed first. The easiest way to do this is with a grinder, which should evenly tear up your flower to workable shreds. If you don’t have a grinder, you can do this step by hand. Just ensure the flower is dry before attempting this, otherwise you’ll end up with a pile of sticky chunks that won’t burn well.

One of the trickier steps with rolling a joint is getting the weed onto the actual rolling paper. If you’ve got your pack of papers with you, the cover flap on the pack should serve as a flat edge for scooping up the weed and placing it into the paper. If you don’t have a pack with you, a credit card or business card works well, too.

You can transfer the weed to the paper with your fingers, but this can be time-consuming and frustrating. Trust me: Stick with a flat edge, and you can complete this step in just a quick motion or two.

When you transfer the weed to the paper, make sure the glued end of the paper is furthest from you, i.e. you shouldn’t have to contort your neck Cirque du Soleil style to lick the glue.

Step Three: Even It Out

Once the weed is on the paper, gently use your fingers to even out the weed pile so it’s roughly uniform across that center fold. This doesn’t need to be perfect, but the roll will be so much smoother if you do this.

OK, so this is the part where 99 percent of first-timers will mess up. And that’s fine. Mistakes are part of the learning process.

Now, how you actually perform the roll depends on a few factors, such as the sizes of your hands and fingers, your individual manual dexterity, and what kind of joint you’re going for. Let’s assume you’re going for the standard, no-frills joint.

Press the front flap of the paper closest to you (e.g. the flap that doesn’t have glue), over the weed so it’s touching the other flap (the one with the glue). Continue pressing the front flap over and down on the weed until the weed begins to form a roll or cylinder. Again, this roll doesn’t need to be perfectly uniform.

The key here is to push the roll into place with just enough pressure. If you roll the weed too tight, it won’t stay lit, if you can even pull on the thing. If you roll it too loose, the paper will burn faster than the weed does.

There’s no tried-and-true trick for getting the pressure, and the roll, just right. That will require a lot of practice, but once you get it, you’ll literally be able to feel it in your fingertips. 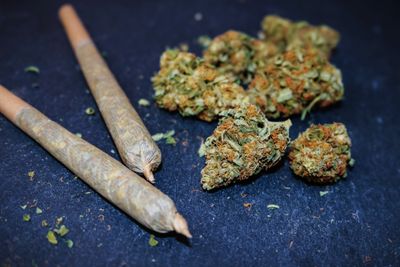 Once you’ve pushed the front paper flap down to the point where it’s about to pop the weed back out, stop there. Lick the glued end, then start twisting the weed upward. Some folks recommend doing this in one fast, simple motion. Others roll upward carefully, repositioning their fingers with each successive twist until the joint is complete. You’ll figure out which way works best for you as you continue to practice.

If you did the roll-up step correctly, the glued side should naturally twist onto the rest of the joint, sealing it. Feel free to give that sucker another lick just to be sure, though.

Step Six: Light It Up, Take a Puff, and Pass It to the Left-Hand Side

So, dope, you’ve got your first proper joint twisted up. The best way to light one is to place the tip of the joint to the tip of the lighter flame. One sharp inhale should draw enough heat to the joint tip to get it lit. If you stick the joint tip directly into the flame, you may scorch too much of it, leading to runs in the paper that will effectively wreck your smoke sesh. 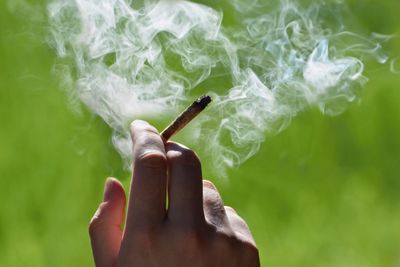 Extra Info to Keep in Mind

If rolling joints by hand just isn’t working out for you, you can buy a simple rolling machine to do the heavy lifting. Additionally, some cannabis consumers prefer their joints with filters or “crutches,” so they don’t inhale a mouthful of weed chunks with every hit. You can make a crutch from any piece of thick paper or cardboard, then slip it at one end of the joint before you start rolling it (so, somewhere between Step Three and Step Four of this guide).

And there you have it! If you’ve never rolled a joint before, just keep practicing, note your mistakes and think of ways to resolve them, and keep trying. Everyone has their own individual style when it comes to rolling a joint, so it’s impossible to devise a one-size-fits-all technique for twisting your own. Happy smoking, y’all!

CULTURE
CIGARETTES
PRE-ROLL
FLOWER
MORE...
IN THIS STORY
CBD
Click to shop at our CBD store
Randy Robinson
FOLLOW
Based in Denver, Randy studied cannabinoid science while getting a degree in molecular biology at the University of Colorado. When not writing about cannabis, science, politics, or LGBT issues, they can be found exploring nature somewhere in the Rocky Mountains. Catch Randy on Twitter and Instagram @randieseljay
Share this article with your friends!
AD
By using our site you agree to our use of cookies to deliver a better experience.
Accept
Decline
MORE FROM MERRY JANE