CULTURE
Weed 101: A Ganja Guide to the Various Parts of a Bong
AD
Looking for your next glass piece? Well, it helps to first know the anatomy of the gear you're buying. Let’s break down the intricacies of the weed world’s most notorious smoking accessory: bongs.
Published on March 23, 2020

Gather ‘round folks, because class is in session. When it comes to cannabis consumption, the tools of the trade are half the fun. And in the case of smoking, bongs are pretty much weed amusement parks. But, with so many different types of water pipes crowding the shelves of head shops and online marketplaces, it can be hard to know what’s what and what type of bong might be best for you.

Thankfully, we’ve got a degree in glass anatomy, so let’s break down the ins, outs, and intricacies of the weed world’s most notorious accessory.

What Is a Bong?

In the most simple terms, a bong — or “water pipe,” as smoke shops were once forced to call the device — is any smoking pipe that uses water filtration and contains a removable bowl piece. But with so many materials, parts, accessories, and adaptors, that definition can feel a little broad.

These days, most bongs are made out of glass, ceramic, silicone, or plastic. Sure, that makeshift piece your uncle made out of a watermelon, PVC pipe, and socket wrench still counts, but when it comes to buying a bong and not making one, most have a similar structure. 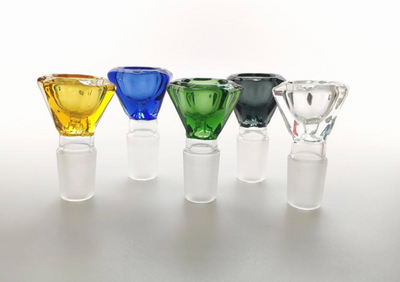 What better way to start our anatomy lesson than with the place where the weed goes. No matter the material, shape, or style, every bong will have a bowl. Bowls are shaped like, well, their namesake, and cradle the ground up bud waiting to be lit. Like every other part of the bong, bowls come in a variety of styles, with some deep and narrow, some shallow and wide, and others so big that they can accommodate an eighth of flower or more for all your party pack needs.

Bowls are open on both ends to allow smoke to travel freely into the body of the piece, and they are removed mid-hit to allow airflow to more easily clear the chamber. To save already-smoked ash from mucking up the bong water, some bowls are equipped with glass screens to catch the material, while many smokers use cheap mesh brass or metal screens to achieve the same effect.

If the bowl on your bong is fixed in place and uses a carb (or finger hole) for air, you’re not holding a bong at all, and are instead smoking out of a bubbler.

Once your bowl is packed, you need somewhere to put it. On most bongs, that’s where the slide comes into play. Slides are traditionally crafted in three standard sizes — 10mm, 14mm, and 18mm — and connect the bowl to the body or water chamber of the pipe.

The main function of the stem is to elongate the bowl so that the smoke travels directly from the bowl into the water held in the main chamber — instead of just billowing freely into the mouthpiece. Depending on the bong, stems can either be fixed in place or easily removable. In the latter case — called a slide — the stem is easier to clean, but can often get stuck to the bowl when it’s gunked up and time to clear the chamber. So be careful!

In classic depictions of hazy basement smoke sessions, the chamber of a bong is typically round or convex at the bottom and more narrow closer to the mouthpiece. But these days, bong’s have evolved past the Jeff Spicoli special to works of high art. So while you can still get classic  bong designs made from every material imaginable, skilled glass artists have evolved their skills and now make intricately-designed borosilicate sculpture art that you can use to get stoned.

The chamber of the bong is also where you will find a variety of technical additions and extra filtration accessories. Percolators — or “percs” for short — are extra filtration add-ons that are built into the body of the bong. They add extra pathways for the smoke to travel, giving it ample time to cool and filter before each hit reaches the mouthpiece. Percolators come in all shapes and sizes — from honeycomb and showerhead, to spiralized or tree-shaped — but at the end of the day, they are all designed for a similar purpose.

Additionally, a number of bong chambers include three interior prongs as it moves towards the mouthpiece. These prongs, pinches, or ice catchers are mostly found in larger bongs and can be used to hold ice, which will further cool the smoke and create an extra smooth hit.

The most self-explanatory part of a bong, the mouthpiece is where you inhale the smoke. Most mouthpieces are affixed to the body of the bong, but some newer pieces allow for interchangeable mouthpieces that are housed by a joint similar to the bowl and can be removed like a slide.

For first time bong users, the most important thing to remember about the mouthpiece is to put your lips on the inside, not the outside, and to make sure it’s clean before you pass it. 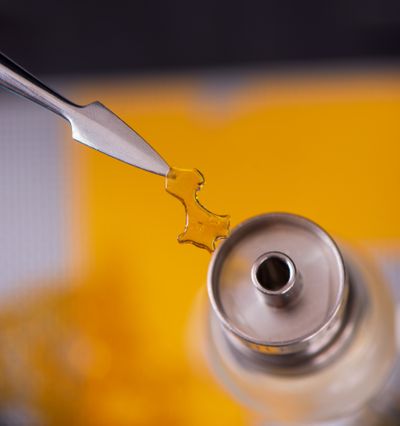 As cannabis concentrates have exploded in popularity over the past few years, a new type of bong has taken over significant shelf space at head shops across the world. Dab rigs are constructed exactly like traditional bongs, except for the bowl, which is instead replaced by what dabbers call a nail. Made out of quartz, ceramic, or titanium, dab nails are heated to high temperatures with a blowtorch, allowed to cool, and then used to vaporize a variety of cannabis extracts. Since the nail is so hot from the blowtorch — or electric coils in the case of e-rigs — the nail instantly vaporizes the dab, turning it into a billow of smoke that is then filtered and inhaled just like a regular bong.

Because dab nails are so hot and do not need to be removed to clear the chamber, rigs typically do not have a removable slide, and come with a joint that directly attaches the nail to the body or chamber of the piece.

Of course, with so many talented glass blowers, foldable silicone bongs, and even ceramic pieces that look lovely, there are nearly endless possibilities for cannabis lovers to explore when it comes to bongs. But now that you know the difference between a slide and a stem, where to pack your pot, and where to inhale, you’re ready to hit the head shop and pick out your next consumption companion.

EDUCATION
CULTURE
GLASS
PIPES
MORE...
Zach Harris
FOLLOW
Zach Harris is a writer based in Philadelphia whose work has appeared on Noisey, First We Feast, and Jenkem Magazine. You can find him on Twitter @10000youtubes complaining about NBA referees.
Share this article with your friends!
AD
By using our site you agree to our use of cookies to deliver a better experience.
Accept
Decline
MORE FROM MERRY JANE