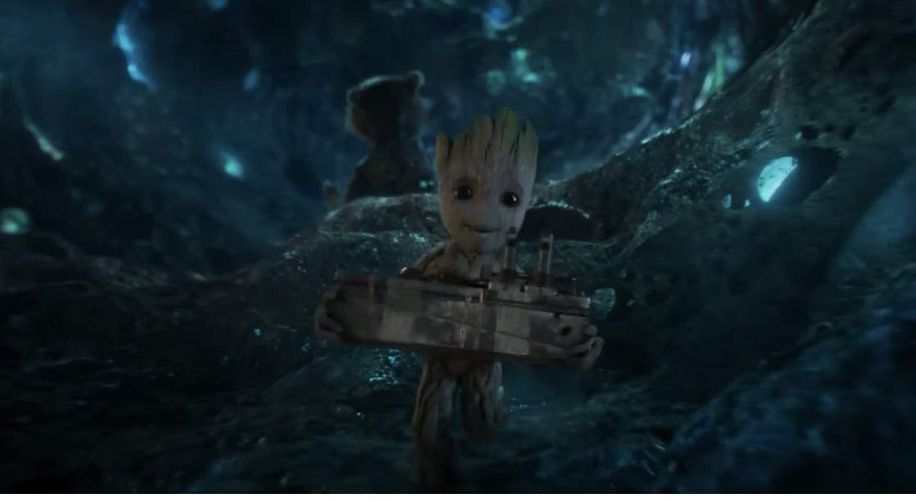 The Second “Guardians Of The Galaxy Vol. 2” Trailer Is Here

Star-Lord, Rocket, Drax, Gamora and baby Groot are back.

Star-Lord, Rocket, Drax, Gamora and baby Groot are back.

The first film came as a surprise success, and broke the bank all around the world. This was unexpected because it wasn’t a particularly popular Marvel comic to begin with, was not directed by one of the big players in the industry and didn’t feature any huge names at the time. The film proved that Marvel could attract audiences to the theatres simply with the power of their name, which created quite the shock wave through Hollywood.

Most people saw the original film (and enjoyed it) so it seems fair to say that Marvel will try to recreate the successful elements of the first movie in the sequel. The trailer gives us big action pieces, witty one liners and a lot of baby Groot (who has quickly became a fan favorite). All in all, it looks exactly like everything we want to see except it probably won’t have the freshness the original film had, and it’ll surely play out like most Marvel films today.

Helming the flick is still director extraordinaire James Gunn, the man behind the splatter film Slither and the script of Zack Snyder’s Dawn of the Dead remake. He’s a very crafty filmmaker with a wicked sense of humor. It would be amazing if he could make an R-rated version of Guardians, but since Marvel is sadly owned by Disney there is about as much chance of that happening as an X-rated Mickey Mouse cartoon seeing light of day.

All the main players are back, our main man Chris Pratt as the lead (let’s hope he gets cast as Indiana Jones), Zoe Saldana as the green alien (she sure loves alien roles), Dave Bautista, and of course Vin Diesel and Bradley Cooper voicing Groot and Rocket Raccoon. This time, there’s some also newcomers, and Gunn has attached the talents of our beloved Kurt Russell (playing Pratt’s father), Rocky Balboa himself and French actress Pom Klementieff.

Needless to say, the trailer and cast make for a promising film, and considering the recent successes Marvel has had, this sequel will surely be one of the biggest movies of the coming year. Even if it doesn’t hold up to the standards set by the first film, this will most likely be an extremely entertaining excursion to the theater. We’ll just have to wait until May 5, 2017 to indulge.

Watch the Guardians of The Galaxy Vol. 2 trailer here.