CULTURE
Think You Know Weed? Ngaio Bealum and Daily Bonfire Will Put Tokers to the Test
AD
A new phone app, co-hosted by an iconic weed comic, will put your cannabis expertise to the test. And you can make some real green while you're at it, too.
Published on January 17, 2020

If there’s one thing that the past few years have made abundantly clear, it’s that we are still learning tons about the cannabis plant and its true potential. Despite the fact that humans have been consuming pot in one form or another for millennia, legal barriers to research, coupled with technological breakthroughs and evolving public opinion, means we’ve really only just begun to scratch the surface.

Still, with thousands of years of history to cull from — including no less than seven Cheech & Chong movies — there’s a glut of factoids to draw on when it comes to testing one’s marijuana mettle.

Hoping to bring an informative balance of fun and learning to the discussion is “Daily Bonfire,” a new smartphone app featuring hosts like Bay Area comic Ngaio Bealum who guide contestants through twelve multiple-choice questions about cannabis. Get the answer right, and you stay in the game, which makes you eligible to win a cash prize of $420. Launched for iPhone in December, the app is also available for Android.

Players are currently encouraged to prove their ganja genius three times a week on Mondays, Wednesdays, and Friday at 1PM PST by Bealum and fellows hosts Matt Baetz and Alexis Rutledge. The app also features a charitable component, with a collective vote held at the beginning of each session to decide what percentage of the winnings should be donated to one of three esteemed non-profits.

Released by HelloMD, company founder Mark Hadfield explains that the app has value both as a marketing mechanism and as an educational tool, with the importance of the former point underscored by the few mainstream advertising options currently available to cannabis brands.

“Marketing in cannabis is hard because most companies won’t take your money,” Hadfield says. “We created Daily Bonfire as a fun way for consumers to interact with brands and retailers as they shop for cannabis. We think this type of thing is the next evolution of how retailers and brands will connect with consumers.”

At the center of it all is Bealum, 52, a veteran of the Bay Area comedy scene and longtime cannabis activist and enthusiast. Known as the star of Netflix’s “Cooking on High,” Bealum is also a seasoned cannabis cup emcee. By phone, he told MERRY JANE about what it means to be a weed comic today, how he got his unusual job, and the irony of taping a show about pot next to a prison. 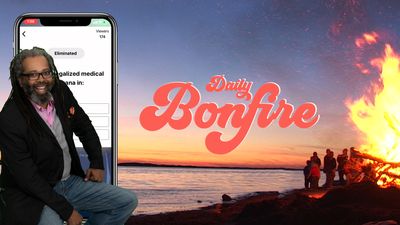 MERRY JANE: How does one land a job hosting a cannabis trivia app?

Ngaio Bealum: My homie Carlos Rodriguez is a very funny stand-up comic, and he had an audition for it. He actually told them that if they needed someone funny who knows a lot about weed, they should call me. I was like, “Yeah, that's probably a good idea.” So, we got together, and I hooked up with Pamela and Mark and all the beautiful people over at HelloMD, and we just went from there. It's been a great journey. The game is growing by leaps and bounds. It's fun. It's informational. It's educational, and we give money to worthy causes, so I think it's great for everyone.

Part of the app involves users voting to give between 5 to 20 percent of the winnings to either NORML, MAPS, or the ACLU. What do they usually land on?

In general, it ends up being 10 or 15 percent. I don't think we've ever gotten past 17 percent — at least when I've hosted — but no one's ever gone for the bare minimum either. It's always usually 10 or 15 percent.

Those are some really fantastic non-profits.

Definitely! I have homies at NORML, and I know some cats at MAPS, too. I don't really know too many people at the ACLU. I mean, I support them all the time — I give them money and whatnot — but I can't say I've ever really hung out with those dudes. I've hung out with the MAPS folks, though. Their parties are psychedelic as shit.

I would hope so.

For real, I remember this party at a house that looked like a spaceship. It was an absolute blast. I'm sure they are appreciative of the hundreds of dollars we send them every week. 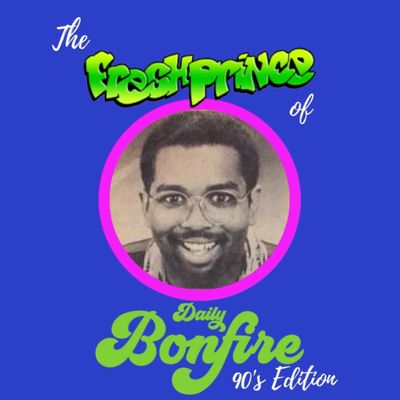 I think it was Benjamin Franklin who said, “Do well by doing good.” I think with Daily Bonfire, we are also helping to remind people that cannabis legalization started as a social justice thing. It started as a way to increase social justice and personal liberty for people, and we can't forget that in this rush where it seems like everyone is wearing suits and opening shops that look like fucking Apple stores.

We still have to remember that there are people still going to jail for this. Weed is still illegal in Nebraska and Georgia and Texas and Idaho and all of these other places. Just because we're fortunate enough to live on the West Coast, where you can drive from San Diego to Seattle and smoke weed the whole time, it doesn't mean the battle is over. We still need activism. We still need to fight for what's right. Also, you probably shouldn't actually smoke weed while you drive — unless it's a really long trip.

When you’re taping the show, do you ever learn something new about cannabis as a result of the questions?

I'm always surprised when someone refers to me as a weed expert, even though it is true. I do have a lot of expertise in many aspects of cannabis. That said, I still feel like I'm always learning and always growing, which is really supposed to be the point of everything. Once a week or so, I'll learn something, or they'll hand me the questions, and I'll make a suggestion about something. If that happens, then everybody jumps into research, and then we have discussions. It's always nice when you can expand your knowledge. 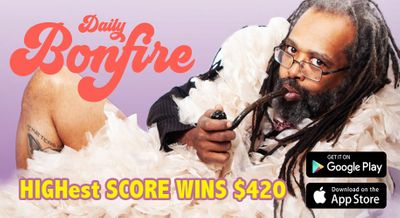 The intersection of cannabis and your career in comedy go way back. When did that first become a part of your act?

When I first started in comedy, most of my jokes were about my family and the difference between men and women. It was the ‘80s. I recently found an old videotape of a set, and I was a little embarrassed. I was hoping there might be a few gems that I'd forgotten about. Nope, it was all dross. But you talk about what you know, right? That's why my two albums are called Weed and Sex and Weedier and Sexier. I didn't really set out to be a “weed” comic, but it just kind of went that way. I actually resisted that label for a very long time because weed wasn't legal when I first started talking about it. When I would go to a comedy club, they wouldn't invite me back. In Reno, I mentioned how you could gamble and get prostitutes, but if you got found with a seed of cannabis, you would go to jail for 10 years. I said that while I was on stage in the casino, and they were very unhappy with me.

We've been fighting this stigma for such a long time. My whole contention has always been that I'm not doing anything wrong. I just like to smoke weed. There's nothing wrong with that. That is not an aberration. No one is a criminal because they smoke weed, although I will say that I do miss being a little bit of an outlaw sometimes. That's OK, though. I've just got to figure out something else to keep my roguish reputation intact.

Now we're seeing the pendulum swing the other way: You're on Netflix, you're guesting on Doug Benson's cannabis show, and you're hosting a trivia app devoted to weed.

A lot of the same cats who were kind of down on me are now telling me I was right. That's nice to hear them say now, but I'm still mad because I missed out on a lot of things. It was a conscious decision to be that way after a while. I was just like, “Fuck it. I'm embracing this new label and going hard.” Once I did that, I found I was actually embraced by the cannabis community even more. That meant I didn't have to call clubs and suck-up for gigs. I could go host cannabis cups and emcee weed festivals and all this other stuff.

But there’s still plenty to be done, you know? We actually tape the "Daily Bonfire" show in Larkspur [in Marin County]. We're actually not very far from San Quentin Prison, which is weird when you think about all of the people who are still in jail for drug offenses while we're out there smoking weed and doing trivia shows.

You’ve seen cannabis evolve from a subculture based around an illegal plant to this mainstream, lucrative industry. Do you still feel cannabis is a subculture, or have we passed that point now?

This is slightly metaphysical, I suppose, but someone pointed out to me that when you smoke, whether it's a joint or a pipe or whatever, everybody stands in a circle. That means equality, or peerage, like the Knights of the Round Table: No one is above another. When more people show up, you just make the circle bigger. You don't keep anybody out of the circle. Even people who don't like to smoke weed, you can just stand in the circle and hang out. You just pass the joint to the next person.

I just like the inclusivity of cannabis culture, when done right. I mean, a lot of these cats who are getting into the game now think of everything as a zero-sum game. If someone else is making money, that's money they're not making, which is not true. There's plenty of money for everybody if you do it right. This concept of creating monopolies in cannabis, I think, is antithetical to the culture, as well as virtually impossible. Cannabis has been decentralized as an industry for umpteen years. Back in the day, you weren't supposed to get too big because then the feds would come get you. I think the object and the goal for me would be to have lots and lots of smaller farms creating great quality cannabis full of love and care and respect for the community and the environment, as opposed to a bunch of cheap, mid-grade crap on the shelves.

Also, Daily Bonfire is a great game, and everyone should play it every week on Monday, Wednesday and Fridays. Play three times a week!

To cash in on getting cashed, download Daily Bonfire at the Apple Store

420
INTERVIEW
CALIFORNIA
VIDEO GAMES
MORE...
Zack Ruskin
FOLLOW
Zack Ruskin is a cannabis and culture journalist living in San Francisco. Follow him on Twitter: @zackruskin.
Share this article with your friends!
AD
By using our site you agree to our use of cookies to deliver a better experience.
Accept
Decline
MORE FROM MERRY JANE