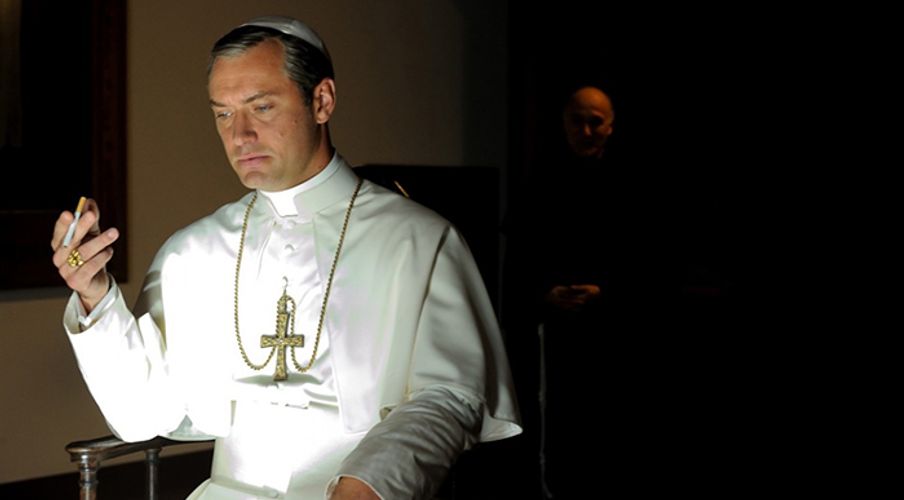 Is “The Young Pope” As Dumb As It Sounds?

A closer look at the ridiculous-sounding, much meme-ified new HBO show.

A closer look at the ridiculous-sounding, much meme-ified new HBO show.

Twitter has had a field day in the days leading up to the premiere of The Young Pope. The idea of a cool, rebellious Pope with sex appeal seems both ridiculous and oddly appropriate. After we’ve endured Bad Santa and Bad Judge, why shouldn’t we get a bad boy Pope? Since we’re less than a week from real-life Bad President, haven’t we brought this upon ourselves? Whether it was a train wreck or a miracle, the world was ready for a dose of crazy, courtesy of The Young Pope.

The Young Pope: This ain't your daddy's Pope pic.twitter.com/q18fqxNJEz

If you come to The Young Pope looking for something ridiculous, you’ll actually be disappointed. Despite some absurd flourishes, overwrought, oddly philosophical dialogue, and truly creative camerawork, the show actually feels like standard HBO fare. As odd as it may sound, The Young Pope feels like a natural heir to The Sopranos or Boardwalk Empire.

Sure, some what-the-fuck moments emerge quickly in The Young Pope. Jude Law’s Pope Pius XIII (formerly Lenny Belardo—he’s the first American to become leader of the Catholic Church) awakens from a dream of crawling through a mountain of babies on the day he is to become Pope. The symbolism is a bit on the nose, but the visual is pretty damn dope. He awakes from this dream only to fall into another dream. In this dream, Pius embodies the absurd rebelliousness of the Young Pope Twitter memes. He says, “We have forgotten to masturbate, to use contraception, to get abortions, to celebrate gay marriages, to allow priests to love each other and even get married!” He soon wakes up from this dream, and the action falls away from the high-key ridiculousness and into the standard fare of prestige drama.

From there, the episode becomes an HBO paint-by-numbers pilot with the odd philosophical monologue, adventurous piece of camerawork, and absurd flourish thrown in for good measure. This Pope speaks his mind and lusts for power, just like Nucky Thompson or Tony Soprano. He dresses down a passing nun in a tone that sounds like a crime boss teaching a lesson to a bookie who missed a payment, beginning his monologue with, “Friendly relationships are dangerous.” He carries himself with the sexual confidence of the Entourage boys; despite his purported virginity, we know it’s only a matter of time before this Pope fucks.

Our future antagonists also feel like ghosts from HBO’s past. Early in the pilot, a gaggle of Cardinals are plotting about what’s to be done with this Young Pope, like Phil Leotardo’s gang plotting a hit on Tony or the Night’s Watch thinking of offing John Snow. Through them, we learn that Cardinal Spencer (James Cromwell) was once a mentor to our new Pope. He felt that he was supposed to be Pope (paging Stannis Baratheon). Then we meet another Cardinal, Voiello (Silvio Orlando), a duplicitous man who hopes to advise the Pope but is actually out for the new Pope’s blood. Will he end up like Big Pussy or Littlefinger? Only time will tell. And, from there, the show only grows more familiar.

The Young Pope isn’t nearly as strange as the Internet seems to have wanted it to be. The show offers some quirky, absurd twists on old themes. While The Leftovers and Westworld have stretched our conception of what an HBO show could be, The Young Pope delivers a mere variation on a familiar theme. There are actors who seem to be playing twice as campy as they should be. There are moments of gorgeously creepy camerawork. There are scenes that ooze with the playful absurdity of a Beckett play; one scene revolves around the Pope requesting a Cherry Coke Zero (no, you didn’t read that wrong). These moments of weirdness aren’t enough to push the show’s tone toward something truly strange, into a Papal Twin Peaks. Instead, this show seems insistent on continuing the tradition of middle-aged men behaving badly, just with some different window dressing.

If you came to The Young Pope for something completely strange, you’ll be disappointed. Even though at moments the show does offer a strangely seductive ride, it is ultimately weighed down by duty to a formula that we’ve seen played out already in every setting except for the Vatican.