CULTURE
The Scientist Who Makes Psilocybin from Bacteria Says It’s "Fairly Safe"
AD
Earlier this year, a research group at Miami University-Ohio figured out a way to get bacteria to produce psilocybin, which is usually found in mushrooms. Here’s what the lead researcher had to say about the trippy project.
Published on October 21, 2019

E. coli usually only appears in the media when there’s a food poisoning scare. And while E. coli can act as a disease agent in some extreme cases, it’s otherwise harmless. In fact, E. coli is so prevalent, it’s literally everywhere: It’s all over your skin, it’s in your mouth, and it’s all over the screen you’re using to read this, too.

Since E. coli is so commonplace, it’s an ideal organism for scientific study. Of all microorganisms, scientists know the most about this specific type of bacteria. (Though there’s an ongoing debate as to whether all bacteria are really just one giant species or if subtypes truly do exist). All that knowledge includes E. coli’s genome sequence, genomic map, and prime DNA locations for splicing in new genes.

So, really, it was just a matter of time before someone decided to take the mushroom’s genes for producing psilocybin and stuck them in E. coli.

According to J. Andrew Jones, PhD., an assistant professor of chemical and biological engineering at Miami University-Ohio and the lead researcher of the E. coli psilocybin project, the idea first came to him in 2017 after a German team sequenced the genes that encode Psilocybe cubensis’s psilocybin pathway.

“I built off of their work by expressing and balancing these genes in E. coli to enable the first example of psilocybin production from a bacterium,” Jones wrote to MERRY JANE in an email.

While splicing mushroom genes into bacteria may sound simple, it’s not. Mushroom and bacteria utilize completely different types of cellular machinery to get things done — or produced — so Jones and his team had to fine-tune the splicing so the genes would actually work in something as basic as E. coli. But, obviously, they got it to work (tweaking E. coli’s genetics is Jones’s specialty, after all) and we may soon see piles of psilocybin being generated by these microorganisms. 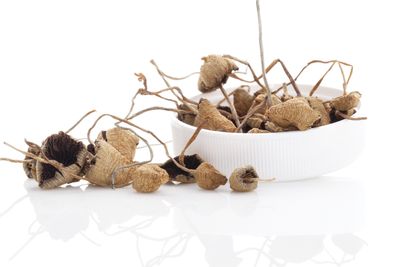 Of course, Jones and Miami University-Ohio aren’t trying to get the entire planet to trip off their biotechnologically manufactured psilocybin. Rather, they’re trying to find ways to make and cultivate large quantities of this compound without producing tons of toxic waste or growing acres of mushrooms in vast underground facilities. Instead, they’re using a technique similar to brewing booze to make psilocybin: Culture the bacteria, add some sugar, and voila, the bacteria essentially poops out psilocybin.

By producing psilocybin through bacteria, Jones and his group can get around some of the logistical issues surrounding mushroom-produced psilocybin. For starters, Psilocybe cubensis and other psilocybin mushrooms contain a lot more than just psilocybin. They contain a host of other alkaloids that could contribute to mushroom trips. If researchers want to study psilocybin alone — a requirement in pharmaceutical sciences — they need it pure and isolated. And to study it thoroughly, researchers will need a lot of psilocybin over the coming years.

Farming requires space, resources, energy, and a team of humans managing the entire operation round-the-clock. Brewing psilocybin from E. coli could prove to be much more cost-effective and efficient than growing it from scratch. We spoke to Dr. Jones to learn more about this novel production technique, and what the effects could be for the pharma industry and consumers alike.

MERRY JANE: Legally speaking, how did your lab group and the university cover its bases? I'm assuming you had to be approved for a Schedule I license by the DEA if you're producing psilocybin.

Andrew Jones, PhD: Yes, before I even started the project, I was in contact with the proper university officials to get approval for this research direction. The university is responsible for obtaining all required approval from appropriate state and federal agencies.

What security precautions did the lab take to ensure its psilocybin wouldn't leave the facility?

First off, psilocybin (or the bacteria for that matter) doesn’t have legs… it can’t just walk out of the lab. On a more serious note, we are required to take special care to ensure that our engineered bacteria and any solutions containing psilocybin, or its precursors, are disposed of through approved hazardous waste programs. This includes tracking the quantities of psilocybin that are produced, as well as restricting access to the research lab to only authorized individuals.

Do your lab scientists need to take any additional safety precautions outside of the norm?

As you are probably aware, psilocybin is a fairly safe compound that must be ingested to be active (i.e. not absorbed through the skin or inhaled). With that said, laboratories are a dangerous place and all personal protective equipment (PPE) and procedures must be used/observed at all times, including: safety glasses, lab coats, gloves, closed-toe shoes, hair back, no free flowing clothing, and — finally — no sniffing the bacterial cultures! 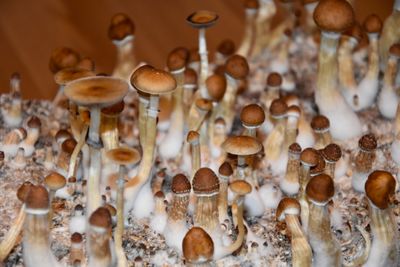 Has anyone in your lab been accidentally dosed on the psilocybin produced by the E. coli? If so, what measures were taken to deal with it?

Certainly not! For this to happen, a significant volume of the E. coli culture would need to be ingested. Following proper lab techniques and safety protocols should keep this from ever happening.

Does psilocybin seem to have any effect on the E. coli themselves? Is it toxic to them in high amounts, or do they seem to do just fine in its presence?

The E. coli do not seem to be phased by the high psilocybin concentrations. We did observe some signs of toxicity to the initial substrate (4-hydroxyindole) and an early intermediate (4-hydroxytryptophan).

What difficulties did the group experience while trying to create this psilocybin-producing bacteria?

My employer [Miami University-Ohio] has been very supportive of this work and has handled a significant portion of the administrative and legal challenges, allowing me to focus on the research. During the research, the most daunting task was identifying the best bacterial mutant, named pSilo16. We had to screen roughly 500 different mutants before this one was identified. 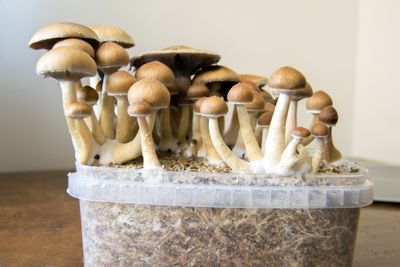 What does the psilocybin look like when its first produced by the bacteria? Does the lab take extra steps to further isolate the psilocybin from solution, or does it stay there, for now?

The psilocybin-producing bacterial cultures don’t look any different from a normal bacterial culture. One of the legal restrictions of this work is that I focus solely on production studies and do not attempt any concentration or purification experiments.

Where is your psilocybin research going in the future? I read that the group will be working on ways to improve production efficiency, but are there other research directions that you're considering?

We have several exciting research directions underway focused on improving the genetic background of our E. coli strain to make it a more stable and efficient host for the biosynthesis. As with all research, it will take some time to develop the technology, but we do plan to publish our findings once they are discovered and reproduced. Stay tuned!

How has the university, as a whole, responded to your research? Have students or faculty expressed any concerns with the project? Has the community expressed concerns?

The response from the university, fellow researchers, general public, mushroom connoisseurs, and my grandma has been overwhelmingly positive and truly humbling. Everyday, scientists are doing cool science and making groundbreaking discoveries that largely go unnoticed. I urge the readers to make an attempt to learn more about what scientists near you are working on and support legislation that funds our work. If you have a question, ask a scientist!

INTERVIEW
RESEARCH
SCIENCE
MAGIC MUSHROOMS
MORE...
Randy Robinson
FOLLOW
Based in Denver, Randy studied cannabinoid science while getting a degree in molecular biology at the University of Colorado. When not writing about cannabis, science, politics, or LGBT issues, they can be found exploring nature somewhere in the Rocky Mountains. Catch Randy on Twitter and Instagram @randieseljay
Share this article with your friends!
AD
By using our site you agree to our use of cookies to deliver a better experience.
Accept
Decline
MORE FROM MERRY JANE