CULTURE
The Nomenclature of Nug: What Weed Is Called Around the World
AD
Many of the words we use for cannabis carry historical baggage, and the usage of certain terms in today’s legal landscape is often up for debate.
Published on February 18, 2019

While cannabis use has been common practice around the globe for thousands of years, the names and neologisms reserved for the plant have evolved alongside human culture. The meandering etymology of the plant’s root words traces back centuries, and today’s common terms and slang have the power to sway the public’s perception of all things weed.

Many of the words we use for cannabis carry historical baggage — and the usage of certain words in today’s legal landscape is often up for debate. “Cannabis” has been the scientific Modern Latin name for the genus of aromatic plants including cannabis sativa and cannabis indica since at least 1728. Tracing the word’s etymological origin, however, is a much more difficult task. The Greeks called it kannabis, or κάνναβης, but the earliest records were probably transcribed from a Scythian or Thracian word. And there is no shortage of theories of the earliest origins of the word. “Cannabis” was also the preferred term for the tincture cure-alls found in 19th century pharmacies.

The earliest attested usage of the words resembling “marijuana” dates back to an 1873 book by Hubert Howe Bancroft and an 1894 document. In 1905, Punch Magazine and the Pacific Drug Review began using words like “marihuana,” followed by a coast-to-coast anti-marihuana mania that unfolded over the next three decades in the form of Reefer Madness. The modern cannabis community is split on whether or not we should continue to use the “M” word, a term rooted in racist American prohibitionist tactics.

As many already know, Harry J. Anslinger promoted the Spanish-sounding word to further his agenda to outlaw the plant. Shortly before alcohol prohibition dissolved in 1933, Anslinger was appointed Commissioner of the Federal Bureau of Narcotics, and didn’t hesitate to blame Mexicans and people of color for smoking pot. Others blame William Randolph Hearst’s influence as a publisher to promote an anti-cannabis campaign, as well as anti-Mexican hysteria. Hearst’s biased news articles insisted that marijuana induced sexually deviant behavior, satanism, arson, and violence, and he profiled Mexicans as the culprits. Many now believe that Anslinger, Hearst, and Andrew Mellon colluded to sink the hemp industry, paper’s competitor.

Over time, the perception of pot has changed, as well as the words we use for it. “The Devil’s Lettuce” slowly became a funny, harmless drug for “stoners” and hippies, and then again evolved into a medicinal plant that everyone uses. Today, there are hundreds of colloquialisms and euphemisms we use for the plant, and most people are very familiar with the myriad of weed slang across American culture. Here are a few variations of cannabis terminology and how the words were formed and adapted over time. 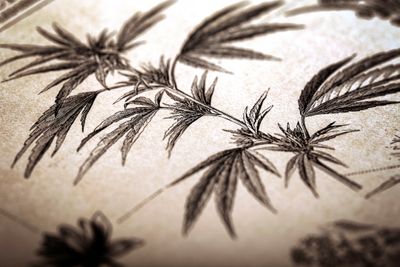 The word “hashish” originated from the Arabic word حشيش مخدر (hasheesh). The first attested use of the word was found in a propaganda-filled pamphlet from Cairo, Egypt dating back to 1123 CE — used to blame a specific sect of people, the Nizari Muslims, for eating hashish. Sound familiar? The use of hash as an intoxicant probably began to emerge in the Middle East as early as A.D. 900, and then slowly began spreading worldwide. Within a few hundred years, hashish bans were in place in various parts of the world. Historians frequently disagree over whether or not the word “assassin” is derived from the word “hashish.” Marco Polo’s records described foreign people like the Order of Hashashins in Northern Persia consuming a powerful drug as part of a rite of passage, but parts of that story may have been injected into the narrative or invented later on. By the 19th century, use of the word “hashish” had spread to Western culture, as seen in texts like 1857’s The Hasheesh Eater.

People that are from Hawaii — including former President Barack Obama — know pot b its Hawaiian slang name, pakalolo. Through high school, Obama was a member of a pot-smoking collective called the Choom Gang. “Choom” is an islander word meaning “to smoke pot.” “Paka” means tobacco, and “lolo” means stupid, dumb, or crazy in Hawaiian, so you’re literally saying “wacky tobacky” when you say pakalolo. Pretty simple stuff. Given the fact that the state is trying to legalize cannabis, and that popular fruity cannabis cultivars flourish on the island, this is a word that you should add to your vocabulary.

Kief, kif or keef — originating from the Arabic word  كيف (kayf) — means either “intoxication” or “pleasure.” Historically, kief was consumed in many forms, ranging from smokable preparations to mahjoun, a lovely ancient Moroccan hash jam. For Americans today, kief is simply the high-THC dust that collects in the bottom section of your grinder, but the word itself is much older. 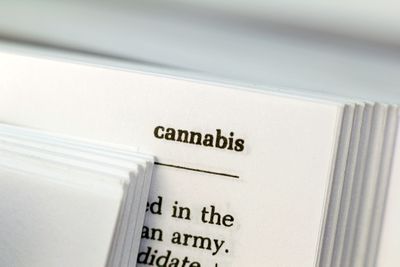 In South Africa, locals call weed“dagga,” which is the official Afrikaans term for cannabis. The name comes from the Khoikhoi root word “dacha,” which referred to nomadic people who once roamed the area. According to some sources, dagga has been used in the region since the 1670s. South Africa isn’t that far off from America in terms of heartless prohibition. The assholes running South Africa’s eradication program in the 1990s doused dagga fields with paraquat, a poison. The deplorable actions were covered in depth by publications like High Times.

The use of the word “ganja” comes from the Hindi word गांजा, which itself was inherited from an ancient Sanskrit word. In Northern India, processed pot is known as charas, or the local word for hashish. A highly common form of cannabis in India, however, is bhang — a milk-based cannabis tea. Words like “bhanga” began appearing in Sanskrit around at least 1000 C.E, and, in ancient texts, Shiva was known as "Lord of Bhang." Today, it’s common to find variations of “bhang,” such as the popular drink bhang lassi. Generally, Indian locals refer to cannabis as “bhang” in just about every form and preparation. Devout Sadhus still consume the beverage and recognize its sacred nature. For some reason, use of the word “ganja” caught on in Jamaica, and it became one of the island’s prefered terms for weed.

WORLD
HASH
HISTORY
CULTURE
MORE...
IN THIS STORY
CBD
Click to shop at our CBD store
Benjamin M. Adams
FOLLOW
Benjamin Adams is a freelance writer whose work has appeared in a slew of publications including CULTURE, Cannabis Now Magazine, and Vice. Follow Ben on Twitter @BenBot11
Share this article with your friends!
AD
By using our site you agree to our use of cookies to deliver a better experience.
Accept
Decline
MORE FROM MERRY JANE