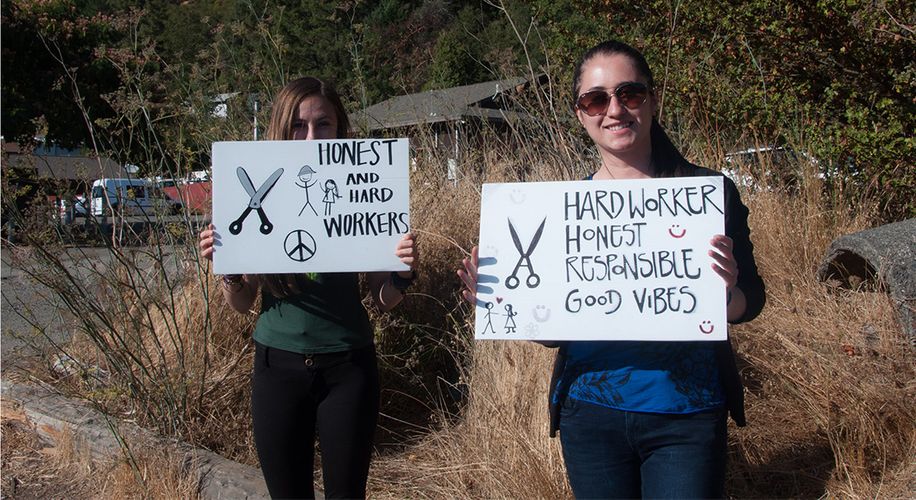 The Life of "Trimmigrants" During Harvest Season in the Emerald Triangle

Our columnists from the marijuana grow mecca in California detail the lives of the seasonal farmhands who flood the Triangle each fall in hopes of quick cash and few questions.

Our columnists from the marijuana grow mecca in California detail the lives of the seasonal farmhands who flood the Triangle each fall in hopes of quick cash and few questions.

This is how one "trimmigrant" — the colloquial term for short-stay cannabis farm laborers — described his seasonal occupation in The Emerald Triangle, California's marijuana grow mecca. Welcome to 21st Steinbeck Country, where the streets of small towns are crawling with 20-somethings in search of clipping jobs during harvest season.

Aspiring workers come in droves, many sporting dreadlocks and carrying lots of bags, looking sweet but shaggy. American kids often roll up to the Triangle in dusty vans, but most others are on foot, hanging out on the street, waiting for a farmer to come and hire them. I remember approaching a group several harvest season's ago. When we came near, they straightened up, kind of like puppies in the pound, sensing possible work.

"Are you a farmer?" asked Tybalt from France. We replied yes, but had no work for him, just questions. Tybalt was traveling with two French friends, a young man and a woman, who also looked eager for work. He had been here the year before and had some success, so this time he came with friends. The girl looked looked frail, and admitted she was glad to have two guys with her. The whole idea of getting into a stranger's car and going to a distant farm in an unknown land seemed rather risky, which it can be.

Tybalt later told us, "Last year I was waiting for a ride and this guy came along asking, and he almost took me, but took this other group of people instead. Then, a few weeks later, I read he was murdered, probably by those same people."

It's true. It did happen in November of 2016. A simple young farmer guy came to town to find helpers, chose five young Americans from various parts of the country, and a short while later was found dead and approximately 100 pounds of processed weed was stolen. Normally, one would think it was the trimmigrant who was in danger from the weird grower picking them up and perhaps even blindfolding them, but it can go both ways. Again, it's a risky business for everyone.

It must be worth it, though. Tybalt claims it's "easy money" and besides, "good attracts good, so we'll be just fine." He felt sure his group would find work because of his nationality. "They call it the French Connection," he explained. We laughed.

That's what sets this group of migrants apart from others: its international and inclusive. At the local health food stores, one can hear accents from around the world during this time of year. We've met traveling trimmers from Tibet, Israel, France, Germany, Holland, Switzerland, Italy, Japan, South Africa, and Central America, and we probably missed a few countries. Likewise, in year's past when we were traveling, we met people in obscure corners of the globe who knew all about dinky little places in the Triangle like Honeydew or Laytonville because of their cannabis fame.

This year there seems to be a surplus of Europeans hawking their services in Mendocino, Trinity, and Humboldt counties. They claim to not be able to find work at home due to the economy there. When they heard of the groovy scene in Northern California where they could make a quick buck, they headed to California, not unlike our own ancestors who embarked upon a similar adventure more than a century ago. The lure of the Wild West never ceases.

"I have scissors but I have never trimmed before," said 31-year-old Jeso, an unemployed teacher from the Basque Country. We recently met him and his traveling companion, Nestor, who's a three-year veteran trimmer.

"I made $4,000 in a month last year," Nestor said proudly. At the going rate of $150 per pound, that means he clipped about 26 pounds. Not bad Nestor. He told us that he noticed a budding camaraderie among the trimmers, as they regularly share information about solid farms and safe places to camp at night, such as backyards and vacant lots. But there is also a sense of competition, too, as the seasonal workers all scramble over the finite amount of jobs available each October. I have to wonder if these young people have any idea about the work they are getting into. After all, how much can an unemployed school teacher know about trimming cannabis, besides it being a surefire way to make cash?

This year, we were surprised by some media savvy Americans who searched the web looking for trimmigrant work prior to arriving in California. Earlier this week, Rod and Amber found us online via www.SwamiSelect.com, and sent us the following message:

Hello, I found you all online and thought, "What a long shot but let's give these folks a shout. My lovely gal Amber and I are trimmigrants from Idaho, currently waiting in Willits but willing to go wherever…

This was clever — certainly safer than sitting on the curb in front of local Mendocino supermarkets and waiting. In towns like Laytonville and Willits, there are places to hideout at night where the neighbors won't catch you peddling your services and people are friendly. However, there's a whole other vibe up in Garberville in Humboldt County. It's a very cute town, but unfortunately in the past few years it has been overrun by homeless street kids, doing the wrong drugs. You can tell they are not really trimmers.

As cannabis farmers, we are baffled by people who bring inexperienced strangers to their farms to manicure their pride and joy. Sometimes you might get lucky and find a winner, but primarily these are rookies who may have great intentions but zero skill. You might think that you can just pick up the scissors and go for it, but that's not true. There are tricks to the trade, if you want to do it right. We wish the trimmigrants all the luck in the world, and no doubt if we were their age now we'd be doing the same thing: sticking out our fingers (not thumbs) to passing cars and snapping them like scissors, in the hopes of finding a new experience and some quick money.

With recreational legalization starting in January, this is the last year trimmigrants will be so visible. Permitted farmers will have to register their workers, who will then have to be fingerprinted. Trimmers will need to file for income taxes. The old days of growing are fading away, bit by bit, as we enter the new era of cannabis in California.

Stay tuned for part two on "trimmigrant" culture in the Emerald Triangle, as Swami and Nikki will continue their exploration of hired help during harvest season in their next column. And visit their website for more on the veteran growers.

Known as "The Cannabis Couple," Nikki Lastreto and Swami Chaitanya have been proudly promoting cannabis use for decades. As cannabis cultivators in Mendocino County, the heart of the legendary "Emerald Triangle" region, Nikki and Swami are behind the brand Swami Select, producing taste and pure flowers grown in full sun with organic methods, plus that extra little Swami touch.