CULTURE
The High Life of Weed Dude Vol. 28: A Legalization Debate Turns Into Strip Poker
AD
This week, Weed Dude continues arguing with New York's lawmakers about the pros and cons of legalization. But every time the politicians make an unfounded claim, they have to remove an article of clothing...
Published on September 19, 2019

In the last installment of our series, Weed Dude and his canna-crew are still in negotiations with NYC's lawmakers about how to approach legalization in the Big Apple. Remember, originally our hero kidnapped the anti-pot politicians just to get the conversation started. They were pissed at first, but after passing a joint around, the suits started to let their guard down.

In this week's edition, Weed Dude comes up with an idea to make concrete progress with the politicians. The sex robot transforms herself into "Lady Justice," equipped with a sliding scale. For every point that Weed Dude's crew makes about the positive benefits of legalization, a nug of weed is added to one side of the scale. For every anti-pot argument the politicians make, they have to remove an article of clothing and put it on the other side of the scale.

So, will Lady Justice tip towards the reefer revolutionaries or the prohibition politicians? There's only one way to find out... 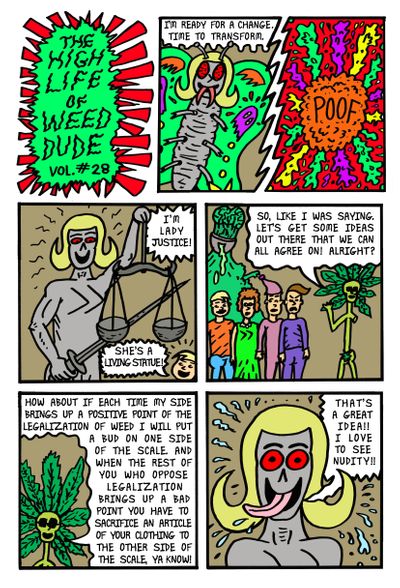 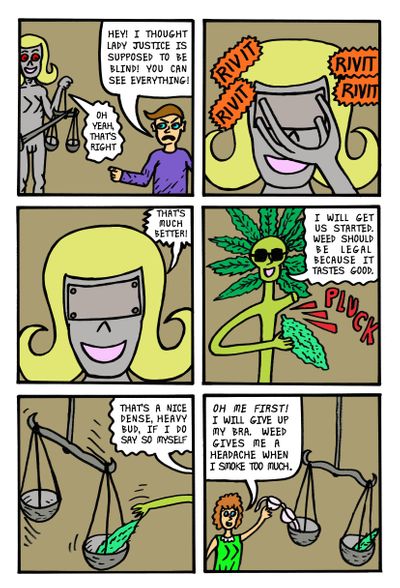 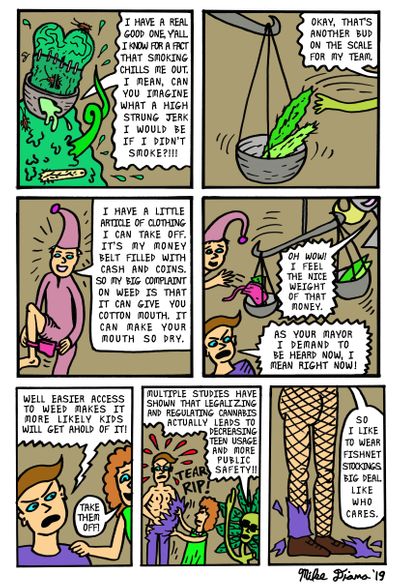 LEGALIZATION
HUMOR
ART
CULTURE
MORE...
Mike Diana
FOLLOW
Mike Diana is an underground cartoonist and cult hero whose been self-publishing work since the late ‘80s. He is the first person to receive a criminal conviction in the United States for artistic obscenity. Visit http://mikedianacomix.com/ for more of his art.
Share this article with your friends!
AD
By using our site you agree to our use of cookies to deliver a better experience.
Accept
Decline
MORE FROM MERRY JANE