CULTURE
The High Life of Weed Dude Vol. 26: Getting Anti-Pot Politicians High as Shit
AD
In this week's edition of our comic, Weed Dude and the politicians he kidnapped engage in a marijuana meeting of the minds. How do you legalize weed? Get the lawmakers stoned.
Published on August 8, 2019

In the last installment of our series, Weed Dude and his canna-crew kidnapped the suits and squares who run New York's government in order to discuss how to best approach legalizing the plant. After all, sometimes you have to break laws to inspire new laws...

So in this week's edition, the marijuana meeting of the minds goes down after Weed Dude forces the politicians to engage in a bluntstorm, so to speak. In other words, he gets the lawmakers as high as humanly possible so they can understand the wonders of weed, and subsequently figure out how to get an adult-use bill back in the legislature.

But right as the politicians and potheads start making progress, they're interrupted by none other than the evil scientist!

Dig into the dank visual feast below, created by the inimitable Mike Diana. And for more on the series, re-visit the previous installment of the series here. 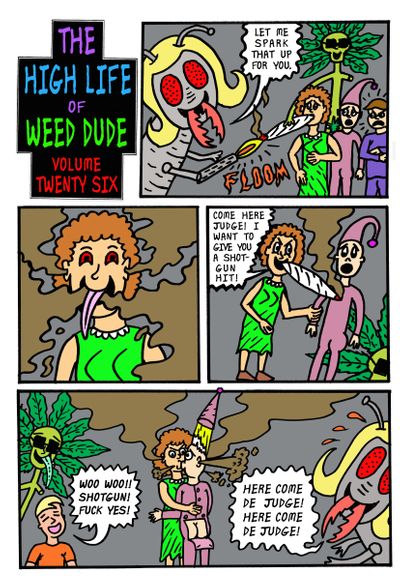 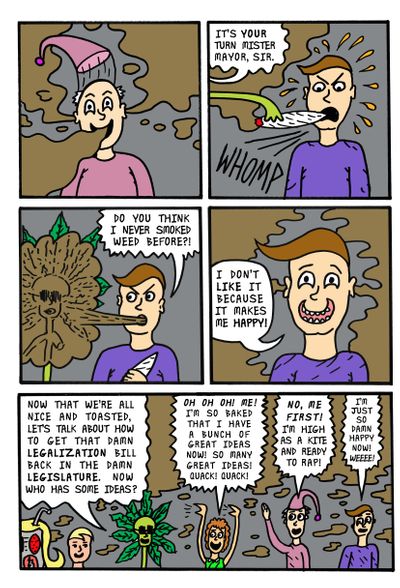 HUMOR
ART
CULTURE
ILLUSTRATION
MORE...
Mike Diana
FOLLOW
Mike Diana is an underground cartoonist and cult hero whose been self-publishing work since the late ‘80s. He is the first person to receive a criminal conviction in the United States for artistic obscenity. Visit http://mikedianacomix.com/ for more of his art.
Share this article with your friends!
AD
By using our site you agree to our use of cookies to deliver a better experience.
Accept
Decline
MORE FROM MERRY JANE