CULTURE
The High Life of Weed Dude Vol. 23: Sign a Pot Petition, Get Free Weed in Exchange!
AD
Weed Dude and his crew are still on a mission to legalize cannabis in the Big Apple. How will they get the city to embrace their advocacy goal? By giving out free weed, of course!
Published on June 13, 2019

In the 23rd installment of our series, Weed Dude and his crew are still on a mission to legalize cannabis in the Big Apple. And now they're seeking signatures — DNA signatures, naturally — to get pot on the next ballot.

How will they get the city to embrace their advocacy goal and sign the petition? By giving out free weed in exchange, of course!

Meanwhile, the Evil Scientist is back and he's morphed into a big blob of goo. While Weed Dude continues to lobby for legalization, his powerful prohibition nemesis regains his strength... 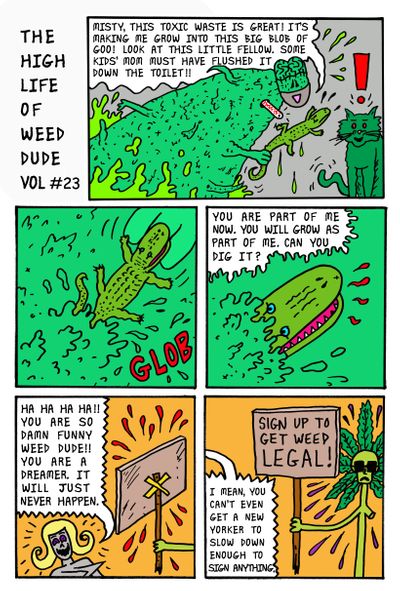 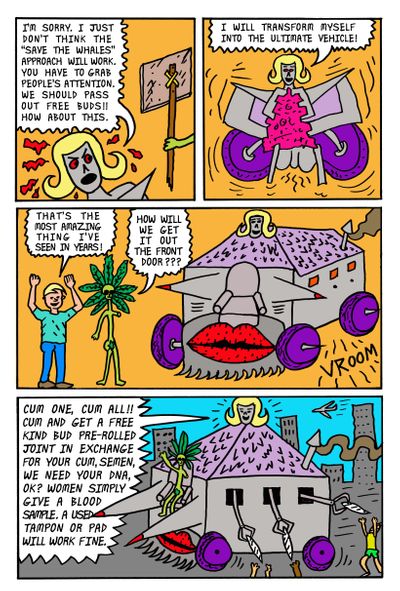 420
HUMOR
ART
ILLUSTRATION
MORE...
Mike Diana
FOLLOW
Mike Diana is an underground cartoonist and cult hero whose been self-publishing work since the late ‘80s. He is the first person to receive a criminal conviction in the United States for artistic obscenity. Visit http://mikedianacomix.com/ for more of his art.
Share this article with your friends!
AD
By using our site you agree to our use of cookies to deliver a better experience.
Accept
Decline
MORE FROM MERRY JANE