CULTURE
The High Life of Weed Dude Vol. 12: The Sex Robot Road Trip
AD
In the first "Weed Dude" of 2019, the killer Sex Robot experiences a change of heart and joins our hero's canna-crew. After all, once you sesh with him, how could you ever hurt this sweet leaf?
Published on January 10, 2019

In Vol. 12 — our first installment of 2k19 — Weed Dude is still hanging with the Sex Robot. After messing with her CPU and turning her into a literal party machine in Vol. 10, she's no longer trying to grind Buck and Weed Dude to a pulp. After all, once you sesh with Weed Dude, how could you ever want to hurt the sweet leaf?

But the bot's one-time master — the evil scientist who originally conducted experiments on our hemp hero — deprived her of the one thing a sentient sex robot should have: a clitoris! Now, the three tokers are on a mission to find the bastard and serve some overdue justice!

Dig into the dank visual feast below, created by the inimitable Mike Diana. And for more on the series, re-visit the eleventh installment here. 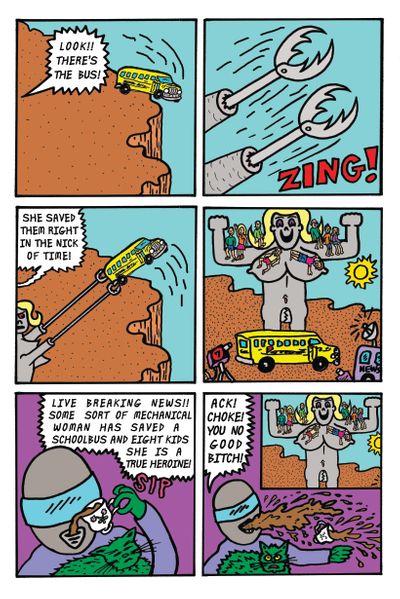 ENTERTAINMENT
HUMOR
ART
NARRATIVE
MORE...
Mike Diana
FOLLOW
Mike Diana is an underground cartoonist and cult hero whose been self-publishing work since the late ‘80s. He is the first person to receive a criminal conviction in the United States for artistic obscenity. Visit http://mikedianacomix.com/ for more of his art.
Share this article with your friends!
AD
By using our site you agree to our use of cookies to deliver a better experience.
Accept
Decline
MORE FROM MERRY JANE