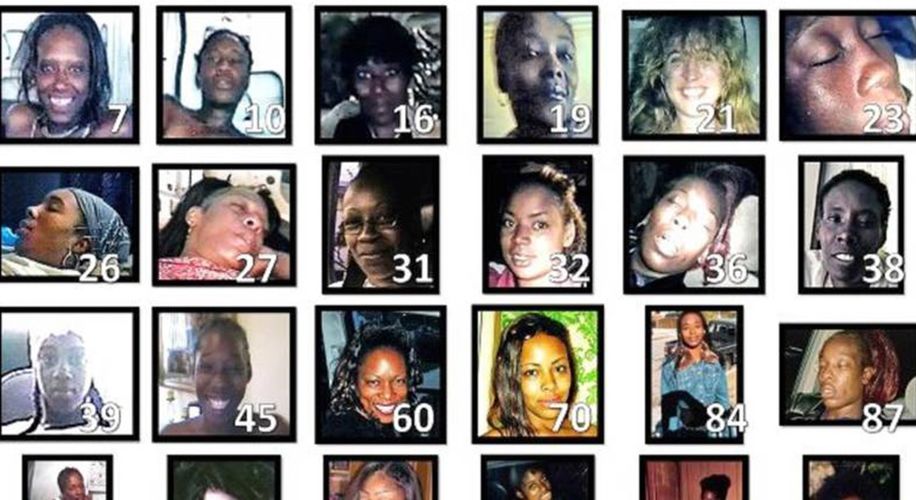 "The Grim Sleeper," who killed as many as 30 women over 30 years, was ignored by police until reporter Christine Pelisek got involved. In a new book, she tracks the murderer’s horrifying legacy.

"The Grim Sleeper," who killed as many as 30 women over 30 years, was ignored by police until reporter Christine Pelisek got involved. In a new book, she tracks the murderer’s horrifying legacy.

Lonnie Franklin Jr. was one of the most prolific serial killers in Los Angeles history, though you’d be forgiven for never hearing about him. A cunning, vicious man that killed at will and preyed exclusively on women over the course of three decades, Franklin got away with his crimes for an astounding stretch of time. Due to the gaps in between his slayings, the man ended up receiving the nom de plume “The Grim Sleeper.” His victims ended up in landfills, alley ways, and dumpsters, strewn around the city like trash. Franklin had intricate knowledge of the city’s disposal and sanitation systems, as well as access to the dumping grounds, due to his job working as garbage truck driver. And while the police know he killed at least 15 women, many believe the body count is a lot higher, even upwards of 30.

As one of the longest-operating serial killers west of the Mississippi, Franklin murdered his first known victim in 1984 and the last murder police pinned on him occurred in 2007; Franklin was finally caught in 2010 through familial DNA testing. His 28-year-old son was convicted on a weapons charge and jailers administered a DNA swab that allowed police to match up DNA found on the victims. After being convicted at trial, Franklin now sits on California’s Death Row, awaiting execution.

In a new book, The Grim Sleeper: The Lost Women of South Central, out June 13 on Counterpoint Press, journalist Christine Pelisek, who started investigating and pursuing the story in 2006, chronicles the hunt for the serial killer through profiles of the women he slaughtered. Every chapter is named for one of the victims — “Debra 1985,” “Bernita 1987,” “Valerie 2003,” — and the story unfolds in chronological order over 30 years. “I wanted the story to be about the women,” Christine says. “I really wanted to focus on the victims.”

While hunting the killer, Pelisek wrote several articles (including the 2008 LA Weekly piece that gave Franklin his nickname) about the deaths, eventually spurring law enforcement to get on the ball and solve the case. Pelisek’s pursuit of the killer was also profiled in the 2014 Lifetime movie, The Grim Sleeper. MERRY JANE chatted with the author by phone to discuss her new book. On top of highlighting how vigorously she pursued the story, the dogged reported talked about why the police ignored the case so long, as well as what it was like driving around with one of the surviving victims as the two looked for the killer’s house.

MERRY JANE: How long did you pursue this story for? Can you tell me about the research involved?
Christine Pelisek: The first story came out in 2006. I got a lot of tips, not as many as the police, but I was surprised that I did get so many. It didn’t seemed like anyone was really interested in that story and it wasn’t until Janecia Peters was killed in 2007 that the LAPD started a task force. I ended up doing the “The Grim Sleeper Returns” story in 2007 and it got more attention. People were contacting me, saying they thought a relative might be involved, or a husband or a boyfriend.

I was there for every court hearing and press conference. I didn’t have to start fresh writing the book because I was already ten years in. I knew the detectives. I knew the prosecutors. I knew the defense attorneys. Not to say that it wasn’t a difficult process to write the book — it was — but because I’d been involved in the case so long I had a really good perspective. I had first-hand knowledge for a lot of it because I was there from the beginning.

How did you first get involved? It seems like you were following leads like a police investigator as you pieced this case together. Was that the intent and when did the breakthrough occur?
The coroner had a huge case load and was looking into a series of body dumps between 2002 and 2006. These were women that were found dead under suspicious circumstances in Los Angeles County. Some died in their homes, some were found in parks, some were found in alley ways, some were found along roadsides. The coroner gave me this list of 38 women and wanted me to look to see if there were any connections. The cases were all over LA County. There were some in the Valley. There were LAPD cases, there were LA County Sheriff’s cases, there were Inglewood department cases, Hawthorne Police Department cases, all over the different law enforcement agencies in LA County.

I started calling all of them to see if the cases were linked. I contacted the Inglewood Police Department to find out information about case number 37 on the list, Princess Berthomieux, a 15-year-old runaway who was found dead in 2002 in an alley in Inglewood. I talked to a detective who told me that Princess’s case was linked to the number 38 case on my list, Valerie McCorvey, 35-year-old mother who was found dead in LAPD territory in 2003. The detective told me those two cases were linked to a series of murders that started in Los Angeles in the early 80s that were tied to ballistics. They were linked later through DNA, because LAPD and Inglewood started cold case units.

Why do you think no one paid attention to this case? It seems like if you didn’t pursue it maybe it would have never been solved.
Back in the ‘80s, it was really a terrible time in a lot of the urban cities in the country. In Los Angeles, there was a really huge crack epidemic. There was the advent of drive-by shootings and gang warfare, so there were a lot of murders going. With police focusing on gang and drug crimes, they weren’t noticing that there were all these women getting murdered. There were other priorities, and, for a serial killer, it was like they had their own little hunting ground. They were able to go ahead and kill and not have to really worry about getting caught.

The police department, especially in south Los Angeles, did not have very many police. There were not that many detectives and they were handling a huge amount of cases. I think a lot of it was just bringing it to their attention. I thought it was important that people knew about this case, because this killer had been around since the ‘80s and the police weren’t even close to solving it. To me, it was important to get that information out there and let the public know this person was still out there killing women.

You actually drove around with one of the surviving victims looking for and taking photos of the houses which might have been the killer’s. What were you thinking during this process? How did it make you feel?
My fear was if there weren’t constant stories in the media about this case, eventually the police department would say, “Oh, we don’t need this task force,” and they would disband it. That’s something I didn’t want to happen. I wanted them to keep working on the case to find out who did it. One of the surviving victims, Enietra Washington, had a lot of memories of what happened and thought if maybe she drove around the neighborhood she might go, “Oh my God, that’s the house.”

She wanted to confront him, and both of us wanted the case to be solved. We were both trying to do what we could in order to solve it. But yeah, I was nervous. You never knew what could happen. You walk up to a door and somebody comes out and turns out to be the killer — what are we supposed to do? I didn’t really think it through. What happens if she did find the door? What were we supposed to do? Tackle him, make a citizen’s arrest?

What do you want readers to get out of reading this book? It didn’t seem like people cared about their deaths.
You look at the media and there are always stories about people like Natalie Holloway and her disappearance, but you don’t hear anything about the victims of The Grim Sleeper. It was a really dark time in Los Angeles’s history and I want people to know about the women and who they were. Their stories deserve to be told just like everyone else’s story.

Looking back, what surprised you the most about your pursuit of the killer?
I was surprised at the arrest. I wasn’t convinced that they were ever going to catch him. It was like trying to find a needle in a haystack. They caught him through familial DNA testing. I felt really happy, because I wanted to see justice for the families. The families were torn apart. Some of the families waited over 20 years for justice. After the LAPD arrested Franklin they found thousands of photos in his home. The police wondered how many of these women were victims. They narrowed the photos down to 180 and posted on the LAPD website asking for info on their whereabouts.

Now that the case is closed what’s next for you?
Franklin is sitting on San Quentin’s death row and will be for many, many years. In California the appeals process can take upwards of 25 years. Most inmates die of natural causes before they’re executed, so that’s probably what will happen with him. I’m always going to be interested in Lonnie Franklin’s case. Just a couple of weeks ago, I had a woman contact me and she said she thought her mother was a victim of Lonnie, so I still get people contacting me about the case today.

"The Grim Sleeper: The Lost Women of South Central" is out June 13th. Pre-order your copy here.

Seth Ferranti makes documentaries, films, comics, and writes for VICE, Penthouse, and OZY, among other publications. He spent 21 years in prison for LSD conspiracy charges and is now out in the world reaching for the sky. http://www.sethferranti.com/