CULTURE
The Ganja Grind: We Got to the Bottom of Jenkem Mag’s “Collaboration” with Popeyes
AD
When we saw Jenkem announce a sauce collab with Popeyes, our spicy senses started tingling. But was the “partnership” legit, or just an elaborate troll?
Published on May 30, 2019

In the venn diagram between stoners and skateboarders, fast-food is often right in the middle. The two groups both stereotypically rely on diets of processed potatoes, high-fructose corn syrup, and anything fried. In other words, the only thing that brings tokers and skaters together more than Huf weed socks is an affinity for munchies-friendly culinary fare.

So when we saw a sponsored post on Instagram from our friends at Jenkem Mag announcing a collaboration with the famous fried-chicken chain Popeyes, our spicy senses started tingling. Considering the proliferation of fast food brands constantly trying to one-up each other on social media, and with Jenkem sharing a sauce commercial, man-on-the-street taste-test, a press release, and some pretty convincing packaging — its branded as “Jenkem Sauce,” a limited edition BBQ condiment — the collabo roll-out seemed a little... odd.

At the same time, the “news” felt like a totally believable attempt at the chain restaurant grasping for a viral moment, as well as a chill finesse by the Jenkem office — who would blame them for cashing in on a few free lunches and some widespread exposure? But was this a legit collaboration where hungry skaters found a niche with an adventurous global brand, or just an elaborate troll?

Founded in 2011 out of a Brooklyn apartment, Jenkem Mag eventually secured its status as skateboarding’s finest source for independent skate journalism and debauchery on the internet. The publication has tackled everything from serious explorations of sexuality, exclusion, and the use of public space in skateboarding, to videos and articles about destroying expensive sneakers with kickflips, teaching Kanye West how to ollie, and videotaping a young weed writer (yours truly) while he tripped balls on acid at a Street League competition.

With so many questions running through our brains about the BBQ sauce collabo, not to mention skateboarding’s long history of snack sponsors, eating habits, and viral marketing, we felt it was only right to reach out by phone to Jenkem to get the scoop. Editor Alexis Castro was happy to chat about the Popeyes announcement, as well as shoot the shit about all things skate munchies and social media manipulation.

MERRY JANE: Yo Alexis. You guys have been busy with the munchies. I’ve heard a lot of people talking about the Popeyes/Jenkem Sauce collaboration. Let’s set the record straight once and for all: Was it legit, or all a hoax?

Alexis Castro: So, it is 50/50. Everything you see is real, besides the officialness of the collab. [laughs]. So we actually made Jenkem Sauce, and we actually did go into the streets to test it. We really did go KFC to give away Popeyes, and everyone’s reactions in the video are real. So that was technically real. But no, unfortunately, you cannot buy Jenkem Sauce at Popeyes.

Damn, no sauce. You all did a really good job with the press release and the sample packaging. How did that all come together so seamlessly?

We have a very talented team over here, and we like to look at things and work backwards. I’m sure if someone else had enough interest and motivation, they could figure it out, too. All it takes is a fancy camera and a couple of spotlights to make a good commercial. 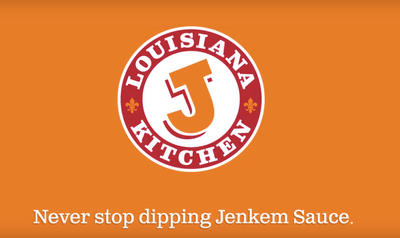 But why make up a Popeyes collaboration in the first place? [laughs]

It started because we had been seeing a bunch of skaters doing these influencer-type campaigns. Like Brandon Biebel selling teeth whitening products and Budweiser, and Paul Rodriguez teaming up with Uber and McDonald’s to sell the McRib. It was just a, “What the hell is going on?” moment. How did skateboarding — which we always assumed was on the opposite side of that commercial spectrum and thought that the influencer industry was wack — and these big-name figures fall into this world?

So we started playing around with our capabilities on Instagram, and we realized that as long as you’re registered as a brand, you can make anything you want into a “Sponsored Post” and you can add “In partnership with Nike,” or “In Partnership with Crystal Geyser Water,” or whatever you want. So we found that out, and from there it was just figuring out how to add our own twist and commentary on skating’s new influencer status.

Jenkem Editor-in-Chief and Founder Ian Michna and I live a couple blocks away from each other, and we walk by Popeyes on our way into the office every day, and we smell it every day. And with P-Rod’s McRib fresh in our heads, it seemed like the obvious choice. At first, we were thinking about using the sauce as wax on ledges or something more skate-related in the commercial. But with the way the skate influencer industry is going, we decided to mock it up as a real product instead... and, well, it worked.

I thought it was real. It’s funny, especially something like a sponsored post on Instagram, where you never consider the barriers of who can say what. What was the response like from other skaters?

Just like you, everyone thought it was real. To me, it was a little flattering, but definitely surprising. It made it feel like something we could actually strive for, which was cool, but also shocking how easy it is for people to believe what they see on social media. But especially in skating, if Arto Saari is on Instagram hawking American Express business cards, it might not be too surprising that Jenkem has a collaboration with Popeyes [laughs].

Did you hear anything from Popeyes?

No, thank god, dude, fuck. I did some research, I watched some Nathan For You. Maybe we’re protected under parody law. But no, we never heard anything from them. At some point, we want to give away some of the sample packs we made; we just haven’t gotten around to it yet.

Alright, let’s dive further into the intersection of skateboarding and the culinary arts. Who had the better fake chicken sponsor, you guys or Shake Junt?

Hmmmm, dude, Popeyes is the best fried chicken, so I’m going with us. You can’t really beat Popeyes.

Fair enough. Stereotypically, both skaters and stoners survive on food from 7-11 and corner stores for breakfast, lunch, and dinner. Who do you think has a worse diet?

Skaters or stoners? Oof. I would say that if you’re a traveling sponsored skater, your diet is probably worse. But like here where I’m at in Bushwick, most of the skaters are like in their late 20s, drinking kombucha every day and eating their acai bowls and shit like that. They’re probably pretty healthy. Quinoa bowls and all that shit. And then for stoners, you can eat healthy all day, but if you’re smoking weed and up at 2 AM, all you want is a pint of ice cream, so then all the work you’ve done goes out the window. When the munchies hit, and you Uber Eats a McDonald’s McFlurry, the healthy eating doesn’t really count.

In 2014, Nyjah Huston signed on as the official spokesperson for Lance brand crackers to specifically promote the company’s “Bold” flavors like Bacon Cheddar, Buffalo Wing Blue Cheese, and Pizza. Has there ever been a worse sponsor?

Oh man. A worse food sponsor? Probably not. I never even saw those crackers anywhere, and I definitely do snack on peanut butter crackers when I’m drunk or stoned. They definitely require a beverage, though. But I mean, Greg Lutzka on K-Swiss is probably equally bad if we’re talking about all sponsors. No one wants to wear K-Swiss, even if they’re free. I can’t think of too many other food sponsors, though. P-Rod is sponsored by Target, so he can go get snacks. That’s pretty baller.

When he first turned pro, Ishod Wair was sponsored by Anthony’s Cookies, a locally-owned bakery in San Francisco. Has there ever been a cooler sponsor?

Speaking of cookies, the dude who runs the Chips Ahoy Twitter account revealed himself as a longtime skateboarder, and started hooking up pros like Bobby Worrest with boxes of cookies. Do you think more of these viral-hungry global food brands would be smart to look towards skating?

I saw that he sent Bobby a box, but I still don’t know who the dude behind the tweets is. The funniest thing about it is that he’s probably just pushing the limits of his job and trying to stay entertained at work, while the marketing department is demanding he “go viral.” He’s probably on skate Twitter a lot and just wants to hang out more. But now he’s got skaters interacting and reposting. Bobby Worrest probably has 50,000 to 100,000 Instagram followers and that’s some reach. Skaters are pretty easy to win over, as long as you have the right plug — and Bobby Worrest is a good plug.

To that same point, did you ever think about the number of skaters that you guys were pushing into Popeyes with the Jenkem Sauce stunt?

I wish we could have gauged how much we actually influenced people to go eat at Popeyes. We had people asking around for it at skate shops and telling us their local Popeyes didn’t have it, but there’s no way to know any numbers. I guess we’ll never know… unless the collabo eventually goes legit.

MUNCHIES
VIRAL
CULTURE
SKATEBOARDING
MORE...
Zach Harris
FOLLOW
Zach Harris is a writer based in Philadelphia whose work has appeared on Noisey, First We Feast, and Jenkem Magazine. You can find him on Twitter @10000youtubes complaining about NBA referees.
Share this article with your friends!
AD
By using our site you agree to our use of cookies to deliver a better experience.
Accept
Decline
MORE FROM MERRY JANE